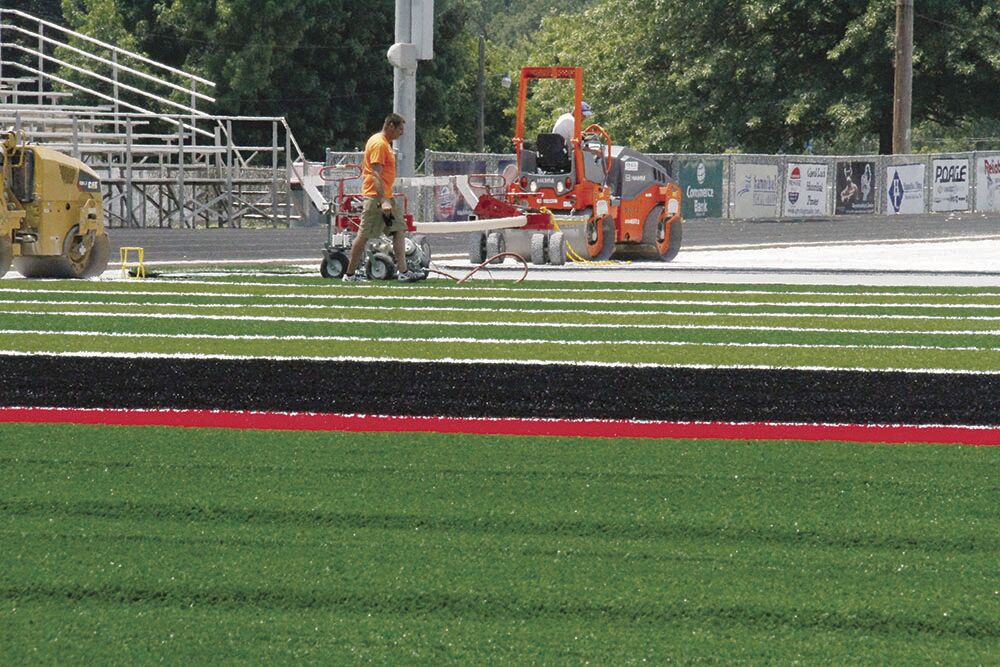 Workers install new turf on the playing field at Porter Stadium on Wednesday afternoon. The new playing surface is expected to be fully installed by mid-July. 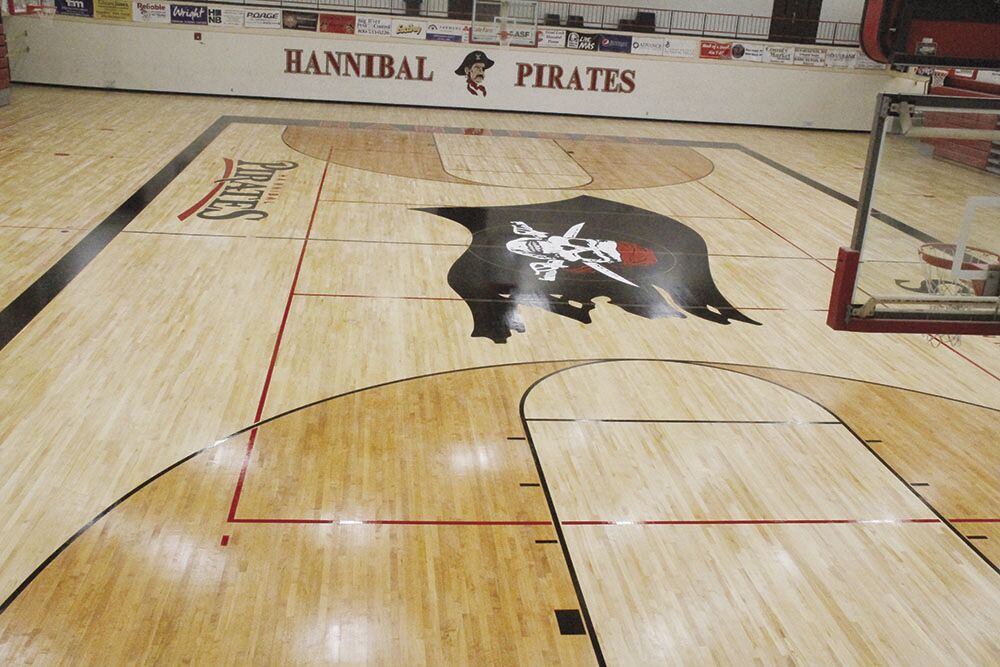 The newly-refurbished basketball court floor at Korf Gymnasium, which received its first upgrade in 15 years this summer.

Workers install new turf on the playing field at Porter Stadium on Wednesday afternoon. The new playing surface is expected to be fully installed by mid-July.

The newly-refurbished basketball court floor at Korf Gymnasium, which received its first upgrade in 15 years this summer.

HANNIBAL — Work has started on upgrading the athletic facilities at Hannibal School District #60.

The old turf at Porter Stadium was ripped up last week and workers have begun laying down the new turf this week.

Hannibal High School activities director Clint Graham said he expects the new turf to be installed completely by the middle to end of next week.

“The field had become a safety issue with the seams and just the (condition of) the turf,” Graham said. “It just wasn’t safe for our players anymore and the school district stepped up and the board approved it. We were fortunate enough to get it done this summer for our school and our athletes.”

The old turf was donated to Hannibal High School by the St. Louis Rams and had been in use for 12 years at Porter Stadium, with the existing turf being past its life expectancy.

Besides football, the playing surface at Porter Stadium is also used by boys and girls soccer, the high school band, P.E. classes and youth sports within the community.

Graham said he hopes to get as many years out of the new turf as the school district got out of the old turf.

“When something’s out in the elements all of the time, it’s bound to wear out and that’s exactly what happened,” Graham said. “We had a lot of good use and good years out of it. A lot of additional years that a lot of schools aren’t able to get out of their turf, so I give our maintenance guys and my coaches credit for taking care of it.”

The new turf will be in place in time for football training camp this summer and the home opener against Jefferson City on Sept. 3.

The Hannibal School District #60 plans on expanding the track to eight lanes, expanding the seating capacity within Porter Stadium and upgrading the concession stand and locker rooms in later phases of the Pirate Pride Project once funding becomes available.

“Right now, our main focus is the turf because it has become a safety issue not only for our athletes, but athletes from other schools as well,” Graham said. “That was our main concern. We are still working towards our goal of raising that money through the Pirate Pride Project to get a new track for our kids and new (seating) for our community.”

Other improvements planned for the Pirate Pride Project includes upgrades to the baseball, softball and soccer facilities at Veterans Sports Complex.

Outside of the Pirate Pride Project, Hannibal has refurbished the floor at Korf Gymnasium over the past week, which will be ready to go for volleyball, basketball and wrestling next year.

The funding for the refurbished gym floor came through the school district’s capital projects.

“It was sanded, re-painted and re-finished, so it looks like a new gym floor,” Graham said. “Basically, this gym floor is re-finished, sanded to bare wood and started back over. Dead spots were fixed and boards were fixed. So, it’s just like a new floor out there for our kids.”

The biggest new feature with the refurbished floor at Korf Gymnasium is a large Hannibal Pirate flag logo at mid-court. It also includes new Hannibal Pirates lettering on both sides of the floor.

It had been nearly 15 years since the floor had been touched up at Korf Gymnasium.

Graham said the upgrade to the floor at Korf Gymnasium was overdue and was appreciative the school district approved the project.

“Everybody I’ve talked to really likes it,” Graham said. “It changes up the color with the new logo at mid-court. Throughout the process, I’ve gotten feedback from coaches who use this facility about what they were thinking wand suggestions on the design. They helped me help the school district come up with the final design.”