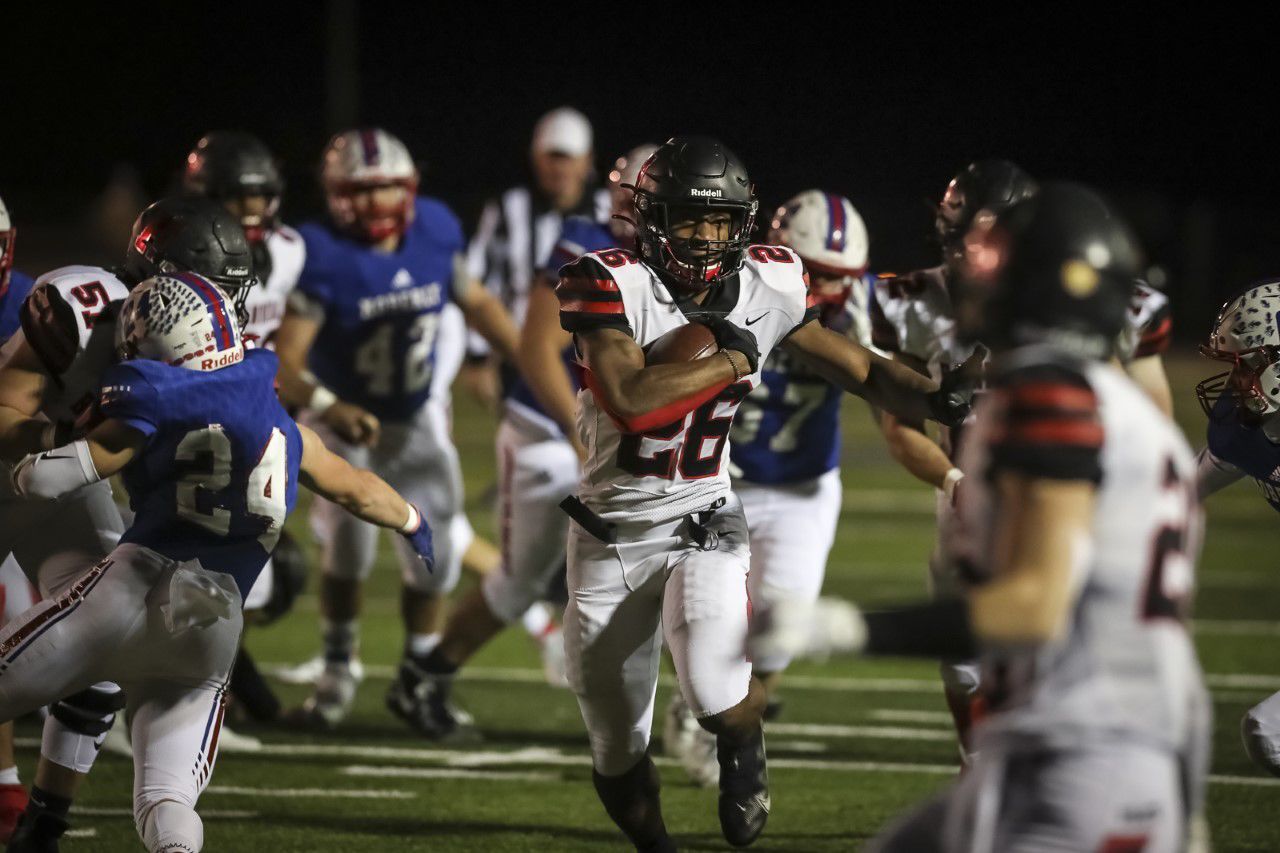 Hannibal running back Damien French runs through an open space during the Pirates win over Moberly in the district title game last Friday at Dr. Larry K. Noel Spartan Stadium. 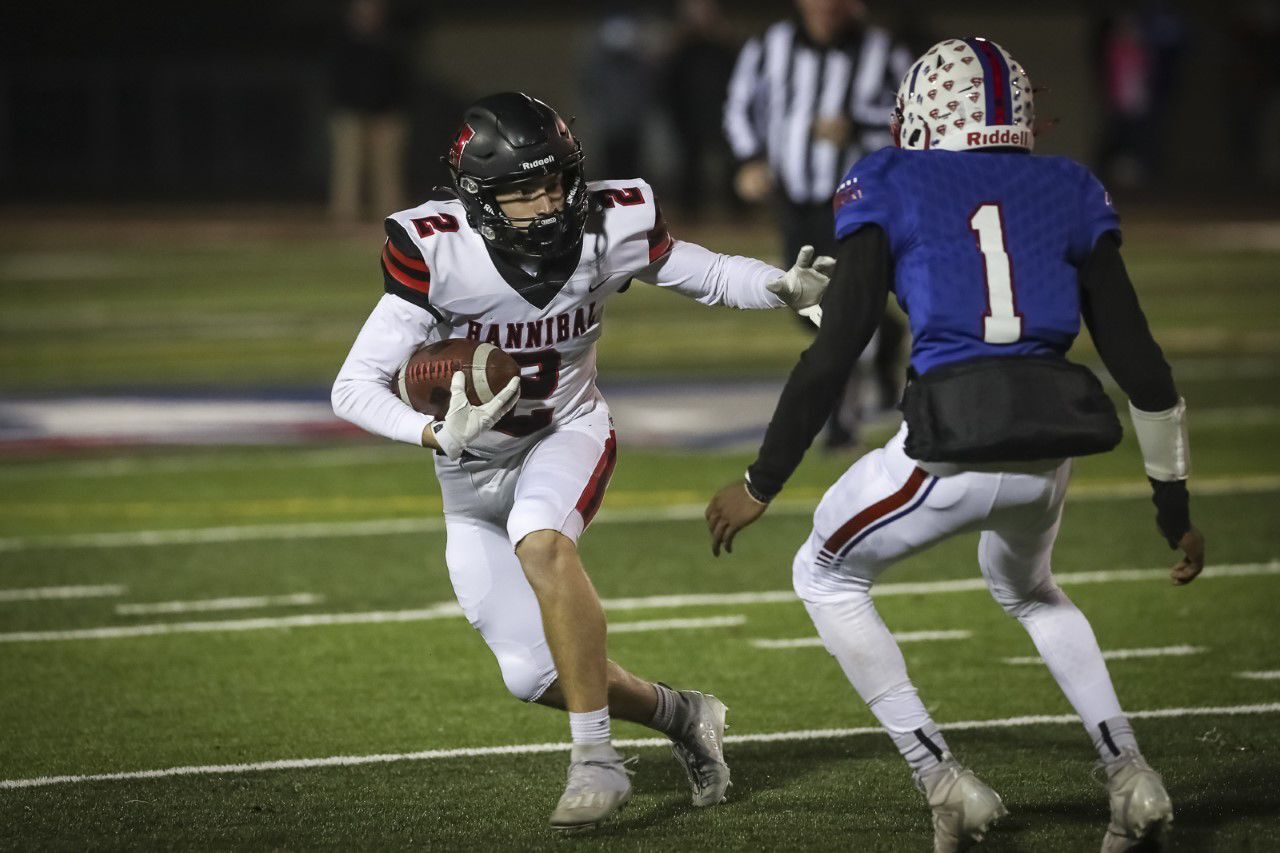 Hannibal running back Damien French runs through an open space during the Pirates win over Moberly in the district title game last Friday at Dr. Larry K. Noel Spartan Stadium.

HANNIBAL, Mo. — The tale of the tape tilts in the Hannibal football team’s favor in almost every discernible way, thanks in large part to having only one game this season canceled because of the coronavirus pandemic.

Having doubled up on the number of games MICDS has been allowed is especially advantageous.

Above all, the Pirates turned some late season adversity into motivation and now are brimming with confidence.

Buoyed by an offense averaging 45 points in the postseason and a stingy defense that surrendered just two touchdowns in two district victories, Hannibal (8-2) is in the Class 4 state quarterfinals for the fourth time in the last six seasons with MICDS (5-0) visiting Porter Stadium at 1 p.m. Saturday

Beating Moberly so soundly like the Pirates did last week – they won the District 4 championship 48-13 after losing to the Spartans 14-13 in Week 7 of the regular season – created a strong sense of purpose in practice this week.

They hope it creates momentum, too.

“It’s a beautiful game and it’s a funny game,” said Jason Noland, Hannibal’s acting head coach. “One week hopefully rolls over to the next. We have to make sure it does. We have to force it to roll over. That comes with the physicality we play with, from offense to defense to special teams. We just play physical.

“We figured it out it’s pretty fun doing it that way, and it takes a lot of the worry away.”

The Pirates need to be physical to slow the Rams’ high-octane attack.

Sidelined the first six weeks by restrictions issued by the St. Louis County Department of Public Health in response to the coronavirus pandemic, the Rams hit the field running for their first game in Week 7, posting a 49-14 victory over Lutheran North. They are averaging 44 points and 431.4 yards overall.

“I have to give our offensive line a lot of credit for what we’ve been able to do,” said MICDS first-year coach Fred Bouchard, the former Palmyra and Culver-Stockton College coach who has more than 200 career victories and five state championships to his credit. “They’ve really played well together.”

With the rash of injuries in the backfield, the Rams needed that.

Nathan Smith, who rushed for 1,059 yards and 15 touchdowns last season, had two carries for 12 yards before suffering an injury against Lutheran North. The next week, his replacement, sophomore Winston Moore, was injured after churning out 91 yards on just eight carries.

So the MICDS coaching staff shifted senior Shawn Putnam from cornerback to running back and he’s produced 473 yards and three touchdowns on 41 carries, while sophomore Steven Hall has 457 yards and five touchdowns on 57 carries.

They both have benefitted from playing alongside junior quarterback Reagan Andrew. A three-year starter, Andrew has completed 68.4 percent of his passes (39 of 57) for 734 yards with six touchdowns and one interception.

“He’s what you want,” Bouchard said. “In addition to all the things in the skill set – the arm strength is there, the different arm slots a quarterback has to throw from, being able to read the option and being quite a runner himself – when you look at his leadership, he’s exactly what you want a quarterback to be.

“He knows what everybody is doing on every single play. He’s that catalyst for making sure the focus is on the right play.”

Andrew was the starter when MICDS beat Hannibal 34-21 in the quarterfinals in 2018, engineering the scoring drive that resulted in the go-ahead touchdown with 45 seconds remaining. The Rams returned an interception 95 yards as time expired for the final score.

And Bouchard is counting on Andrew’s experience in this game at this stadium to help tilt the scales back in MICDS’s favor at least slightly.

“If he gets in the huddle and says, ‘Next play,’ the guys listen to him and move on to the next play,” Bouchard said.