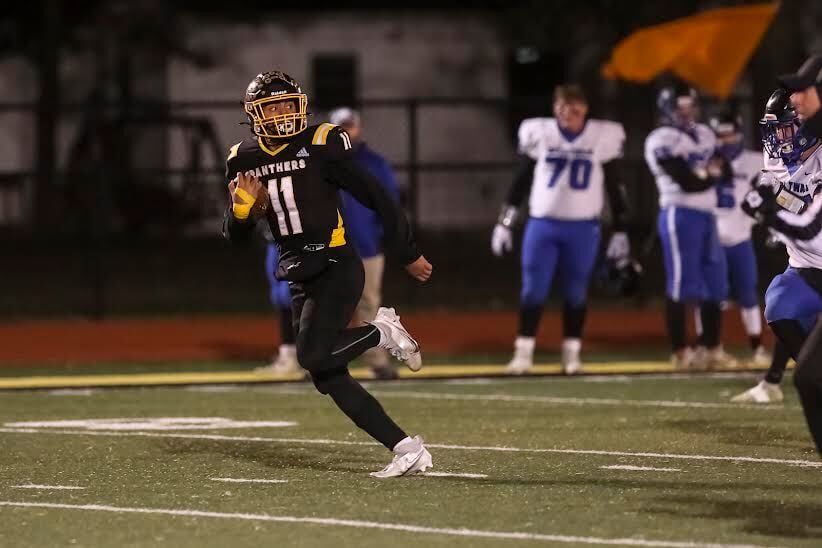 Monroe City’s Joshua Talton (11) runs the ball during the district championship game between the Monroe City Panther and the Mark Twain Tigers in Monroe City Friday. 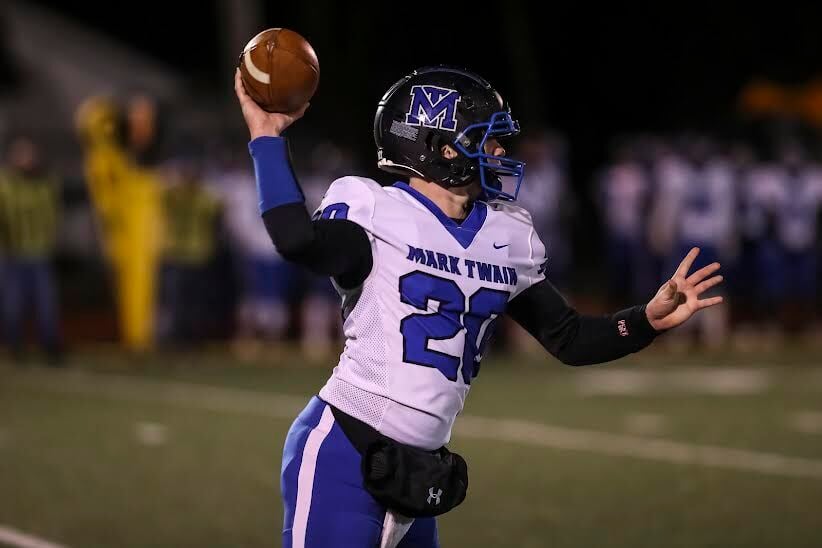 Mark Twain’s Payton Hawkins (20) throws a pass during the district championship game between the Monroe City Panther and the Mark Twain Tigers in Monroe City Friday.

Monroe City’s Joshua Talton (11) runs the ball during the district championship game between the Monroe City Panther and the Mark Twain Tigers in Monroe City Friday.

Mark Twain’s Payton Hawkins (20) throws a pass during the district championship game between the Monroe City Panther and the Mark Twain Tigers in Monroe City Friday.

MONROE CITY, Mo. -- Monroe City has won the district championship for the first time since 2017 after defeating Mark Twain 52-0 in the Class 1 District 2 title game at Lankford Field on Friday.

It was the second straight week the Panthers shut out their opponent, with the aid of five turnovers by Mark Twain. Monroe City limited Mark Twain to under 100 yards of total offense.

"The kids are just flying around and we are getting a lot of people on the point of attack," said Monroe City head coach David Kirby. "Our defensive line was creating a new line of scrimmage and it was allowing our linebackers and secondary to flow and run plays ... They were getting a lot of kids to the ball and group tackling instead of having to do it by themselves."

Mark Twain won the coin toss and decided to defer, giving Monroe City the ball to start the game.

The Panthers would soon capitalize when Ceaton Pennewell ran in a one-yard touchdown. After Landon Utterback ran in the two-point conversion, the Panthers took a quick 8-0 lead.

Unfortunately for Mark Twain, All-Conference linebacker Dawson Talbott injured his knee in the second play of the game and was out the remainder of the contest. This hurt the Tigers offense as well since he is the starting fullback.

"As soon as he got hurt, I lost 13 of our 16 offensive formations for the night," Leake said. "Pretty much our entire offensive game plan. Kind of had to go to a spread attack since he was our fullback. Going to a spread attack and it being 35 degrees and windy, you're not going to do much against a great defense like that."

In Monroe City's next possession, quarterback Kyle Hays threw a 47-yard pass to Waylon DeGrave to put the Panthers in scoring position. Joshua Talton would then run in a 16-yard touchdown, which put Monroe City up 16-0 after a successful two-point conversion.

Pennewell intercepted a pass from Mark Twain quarterback Payton Hawkins in the Tigers next drive. He would take things into his own hands when Monroe City's offense took back possession, running in a 13-yard touchdown and getting the two-point conversion to put the Panthers up 24-0.

Pennewell would finish the game with two rushing touchdowns and two interceptions.

"Ceaton can be an extremely aggressive fullback and he really does a great job of pounding the middle of the defense and forcing the defense to key on him," Kirby said. "It opens up other holes. We have a great one-two punch with those guys."

Kirby also mentioned that Landon Utterback has been a big part of Monroe City's backfield.

"(Utterback) had some great carries tonight and some big yards," Kirby said. "He's kind of like our swiss army knife. He does a lot of things for our offense."

Talton ran in a 16-yard touchdown in the Panthers next possession to put Monroe City up 30-0.

Landon Moss ran back a kick return into Monroe City territory for Mark Twain. However, Talton came up with an interception to stop the Tigers momentum.

Monroe City then drove down the field and scored a touchdown on a 14-yard pass from Hays to Waylon DeGrave, which put the Panthers up 36-0.

Mark Twain kick returner Lakoda Preston had run back deep into Monroe City territory, but the Tigers offense fumbled the ball and it was recovered by Ashton Wallace.

The Panthers would immediately pounce, with Talton running for an 87-yard touchdown, his third of the game.

Monroe City once again stifled Mark Twain's offense in the Tigers next possession. On back-to-back plays, Talton sacked Hawkins and Pennewell came away with an interception on a trick play by Mark Twain.

Talton then ran for his fourth touchdown, a 55-yard score. He would finish the game with 227 rushing yards.

"He has been running really well the past month and becoming more physical," Kirby said about Talton's play.

Monroe City defensive lineman Landan Holland recovered a fumble late in the first half and the Panthers took a 52-0 lead into halftime, setting up a running clock for the second half.

Mark Twain ends their season with a 10-2 record after falling to Monroe City in the district title game. The Tigers finished in second place in its district for the second straight season and finished the season with the most wins since 2015, when Mark Twain went 11-1.

"As ticked off and frustrated I am about tonight ... I'm proud of our kids," Leake said. "Who they are and how they played all season. Going 10-2 and to the district championship game. I can't say enough about how they bought in and put in the work. They played their butts off."

Monroe City (11-1) moves on to the Class 1 state quarterfinals and will play Hayti (11-0) on Saturday at Hayti High School.