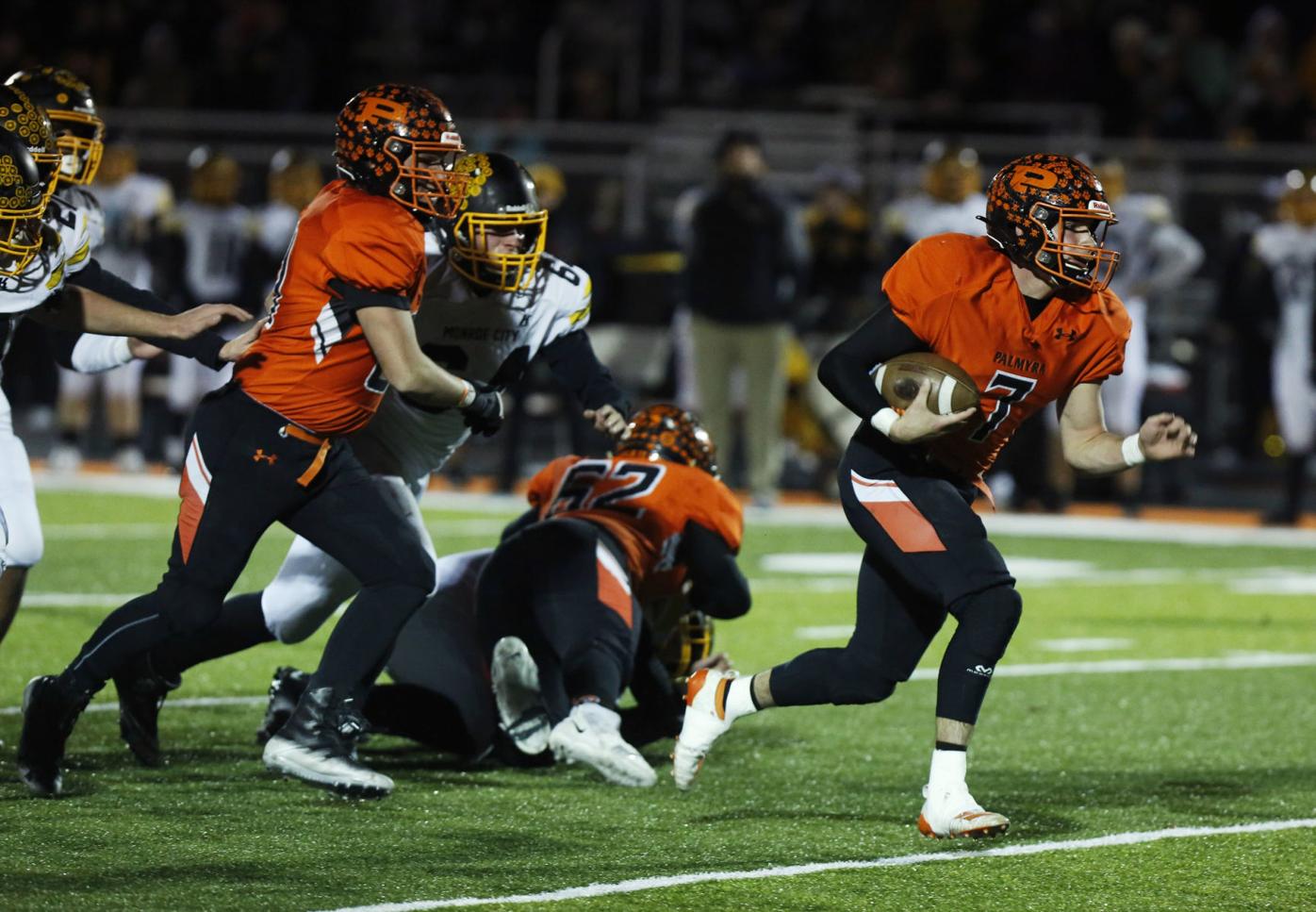 Palmyra running back Ross Arch, right, breaks free for a 35-yard touchdown run in the first quarter of his team’s victory over Monroe City in the Class 2 District 6 championship game last Friday night in Palmyra, Mo. 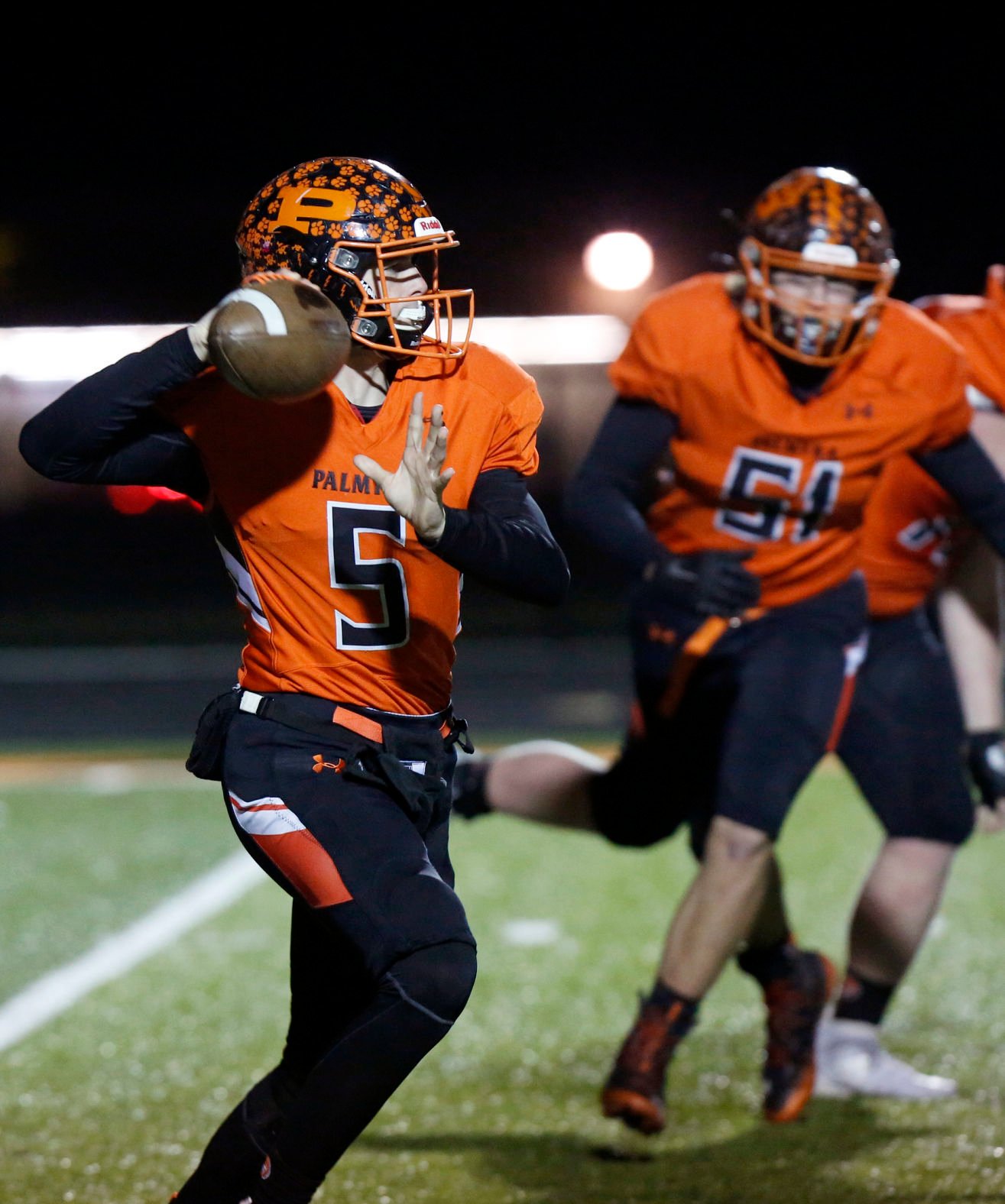 Palmyra running back Ross Arch, right, breaks free for a 35-yard touchdown run in the first quarter of his team’s victory over Monroe City in the Class 2 District 6 championship game last Friday night in Palmyra, Mo.

PALMYRA, Mo. — Palmyra heads into the Class 2 state football tournament with a perfect 11-0 record and homefield advantage against Hallsville in their state quarterfinal matchup on Saturday.

“It has been an awesome year on our new field,” said Palmyra head coach Kevin Miles. “We have met numerous goals and will be excited to host a Saturday quarterfinal game at home in the first year of the new stadium.”

Palmyra had previously defeated Hallsville (7-4) 51-16 in Week 3 of the season. The regular season meeting was scheduled at the last minute, with both teams previously scheduled opponents temporarily pausing their programs due to a coronavirus outbreak.

The Week 3 loss put Hallsville at 1-2, but the Indians turned around their season following that loss. Hallsville has won seven out of their last nine games following the Palmyra loss.

On Hallsville’s way to the state quarterfinals, they defeated Hermann 44-8 and North Callaway 36-14 in the district playoffs.

“We are both much diffferent teams now,” Miles said. “It will be a much different game this time. We will both (have) time to prepare for each (other), and it will be a tough game.”

Miles said he thinks Hallsville will come out motivated after its previous loss to Palmyra.

“This will be a tough game, and we have to play the best game of the year to have a chance to win,” Miles said.

Palmyra had to battle back to earn the win over Monroe City after falling behind 8-0 early on in the quarter. Even after Palmyra gained the lead, Monroe City kept it close the remainder of the game.

Miles said it was beneficial for his team to be tested last week.

“It is always good to see how your team will react to adversity,” Miles said.

“(Zane) is a young man that is always around the football,” Miles said. “He will continue to make plays because that is what he does.”

Miles feels that Lehenbauer has progressed as a quarterback and leader as the season went on.

“I can’t say enough about the things he does on and off the field, the hallways and in the locker room,” Miles said. “He is a true leader, whether he is throwing the ball or handing it off. He does what needs to be done to be successful.”

In last week’s game, Palmyra relied on Ross Arch to carry the load in the running game. He is far from Palmyra’s only option, as the Panthers have used Wade Begley and Hayes Miller extensively this year.

“We like to run the ball, but have (an) all-around team and feel that we will do whatever (is) needed to have success,” Miles said.

The Panthers defense came up with some big plays against Monroe City last week, with Brayden Madden and Collin Arch coming up with interceptions.

The Panthers defense will need another big game in the state quarterfinals against a Hallsville offense that has averaged 37.2 points per game this season.

“We will continue to play defense the way we do,” Miles said. “We will play physical and downhill. Be good tacklers and that is what we hang our hat on.”