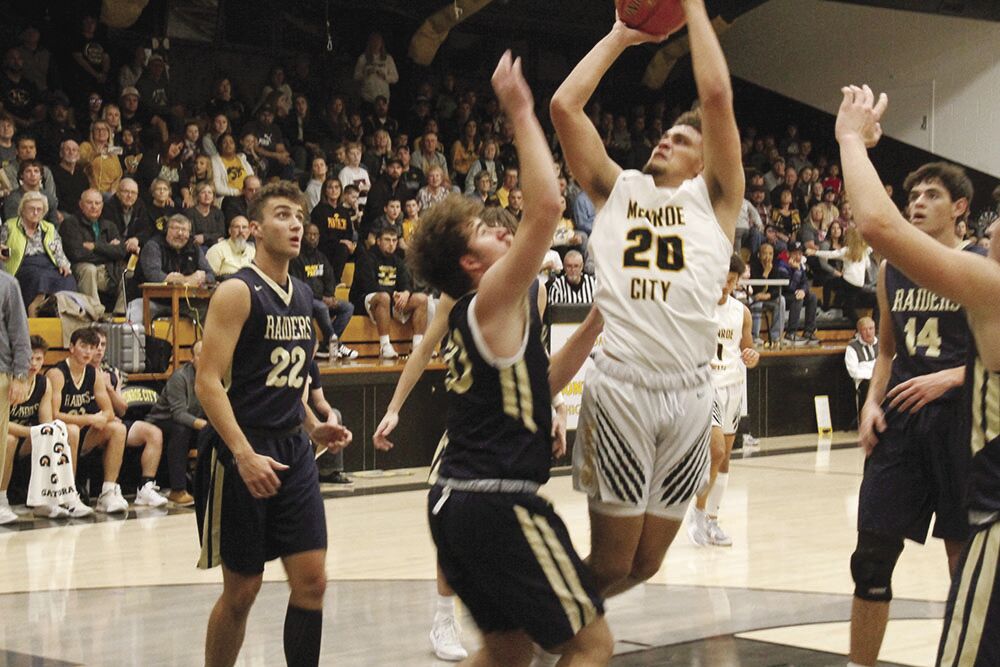 Monroe City senior Jaedyn Robertson jumps up for a shot while being guarded by a QND defender during Tuesday’s home opener. 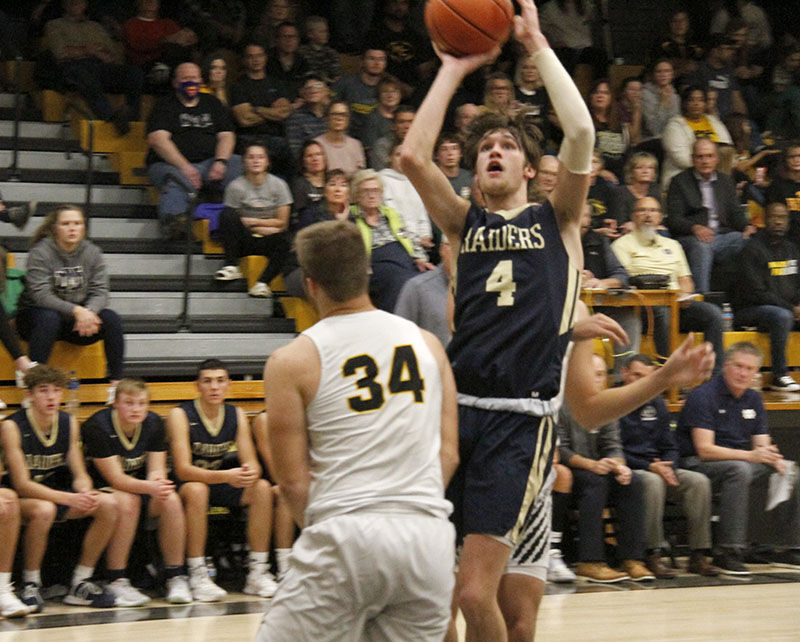 Monroe City senior Jaedyn Robertson jumps up for a shot while being guarded by a QND defender during Tuesday’s home opener.

MONROE CITY, Mo. — Two teams from opposite sides of the river that run similar systems met on Tuesday night in Monroe City.

The Panthers would come away with a 62-48 win over the Raiders in Monroe City’s season opener, with QND losing their first game of the season.

Both teams took awhile to get going as neither the Panthers or Raiders could score for the first two-and-a-half minutes into the game.

Then, Monroe City senior guard Joshua Talton scored a bucket to get the Panthers going. Monroe City then went on a 8-0 run before Meyer called a timeout for the Raiders.

“That 8-0 run put a spotlight on us,” Meyer said. “Us playing defense for two to three minutes and not getting a stop. They got an offensive rebound and scored. We went to the other end and got fouled and don’t score.”

Monroe City had key bench contributions from senior forward Jaedyn Robertson and senior guard Cade Chapman in the first half.

QND had similar contributions from the bench by junior guard Braden Sheffield, who scored 13 first-half points and pulled down three rebounds.

Sheffield finished with a team-high 22 points for the Raiders.

“He played with Josh (Talton) and a couple of those guys on AAU and wanted to make sure that he performed up with those guys,” Meyer said. “He’s battling an injury. So I thought that made that performance even more special. He’s a guy that comes off the bench for us and gives us energy.”

Monroe City would enter halftime with a 29-21 lead and made a couple of adjustments in the second half.

“When they switched it up to try to slow us down and went into a zone, our guys did a good job of scoring,” Edris said. “So they had to get out of that. I didn’t like that we were both teams were getting baskets and I would had liked to get more stops.”

Robertson would continue his solid play in the second half, scoring 11 more points. He had a total of 20 points.

“Jaedyn got more experience last year and I think he found a lot of confidence,” Edris said. “He found his groove tonight. He was able to catch the high post and get into his game. He was really patient offensively.”

“Sacred Heart is one of the top ranked teams in Illinois in 2A,” Meyer said. “They are a team that we could see in a sectional or a regional or our holiday tournament. There’s a sense of bounce back and a sense of going back out there to re-establish ourselves Friday night.”

“They were a really solid team last year,” Edris said. “I think they have a lot of size. It will be a really good challenge for us because we are going to see some size throughout the year.”