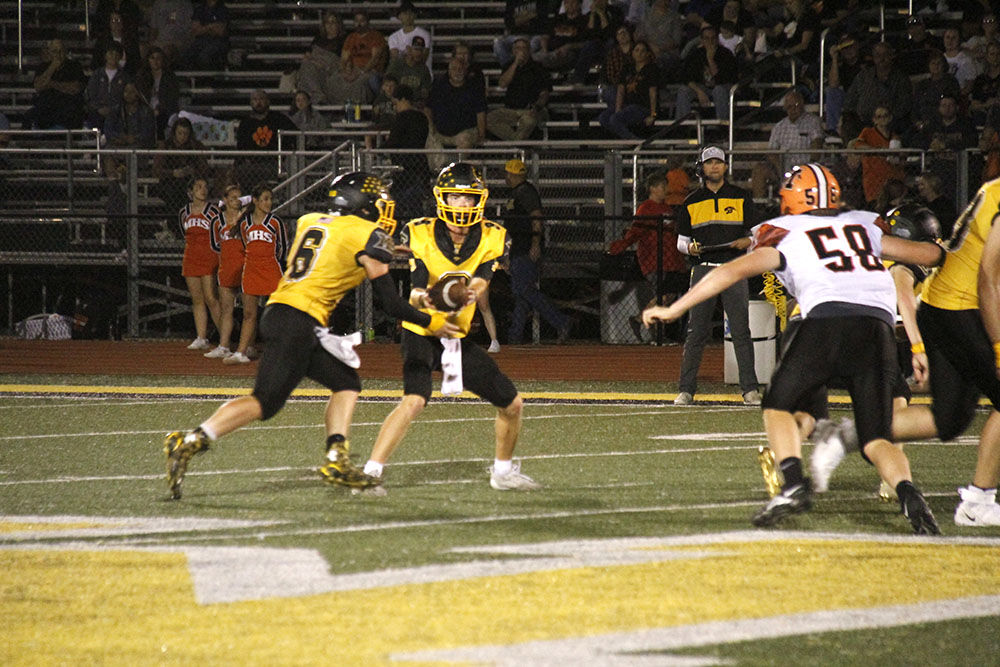 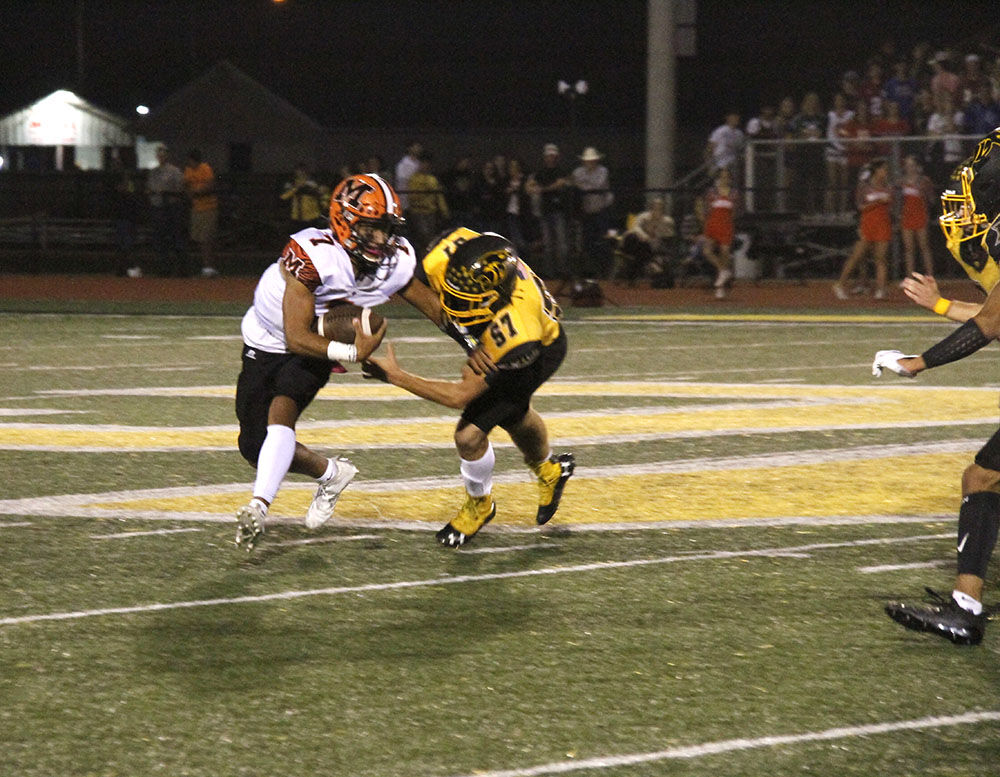 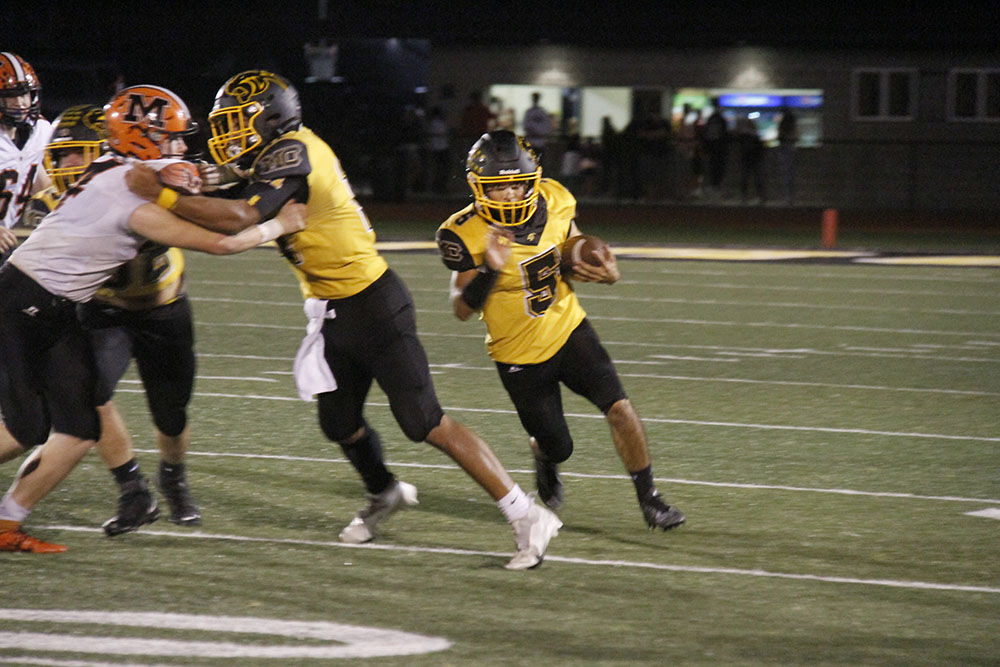 Monroe City running back Elmer Mendez-Martinez rushes during the first half against Macon on Friday, Oct. 8 at Lankford Field. He would rush for 29 yards and a touchdown.

Monroe City running back Elmer Mendez-Martinez rushes during the first half against Macon on Friday, Oct. 8 at Lankford Field. He would rush for 29 yards and a touchdown.

MONROE CITY, Mo. -- Monroe City bounced back from its first loss of the season with a convincing 58-38 win over conference rival Macon on Friday.

The Panthers offense was firing on all cylinders, scoring its most points of the season in Friday's shootout win. It was the fifth time this season Monroe City scored over 40 points.

Monroe City would put up a total of 711 yards on offense.

"I thought the offense really came out and did a good job, especially with establishing the line of scrimmage," said Panthers head coach David Kirby. "I was really happy with the way our offensive line played tonight. We had over 700 yards of offense and that's a pretty powerful statement the offensive line put out there."

Monroe City scored on the first possession of the game, driving down the field with strong runs by Joshua Talton. Landon Utterback would score on a two-yard run to put the Panthers up 6-0.

Joshua Talton would score a touchdown on a 70-yard run in Monroe City's next possession. After Utterback ran in a two-point conversion, the Panthers took a 14-0 lead.

Utterback ran in his second touchdown of the game early in the second quarter on a one-yard run to put the Panthers up 22-0 after a Kyle Hays pass to Cade Chapman for a two-point conversion.

Macon quarterback MyKel Linear ran in a touchdown to get the Tigers on the board in their next possession, narrowing Monroe City's lead to 22-6.

Macon then stopped the Panthers in their next two possessions. However, a pass interference call against the Tigers on Monroe City wide receiver Waylon DeGrave would set up a three-yard touchdown run by Ceaton Pennewll to put the Panthers up 28-6 right before halftime.

Josiah Talton then intercepted a Linear pass to end the Macon threat near the end of the second quarter.

"Anytime our defense can get the ball back and give our offense another possession is huge," Kirby said. "They made some really good plays tonight on defense."

Macon scored in its first possession of the second half when Trevin Shrum ran in a 12-yard touchdown score after breaking several attempted tackles by Panther defenders.

Monroe City answered right back when Hays threw a four-yard touchdown pass to DeGrave in the third quarter to put the Panthers up 36-14.

The Tigers scored right away when Linear ran in his second touchdown of the game.

Hays threw his second touchdown pass to DeGrave for 91 yards to give Monroe City a 44-20 lead.

Monroe City had one more scoring play in the third quarter when Hays threw a 62-yard touchdown pass to Chapman to increase the lead to 50-20.

"MyKel Linear is a special player and made some pretty big plays tonight," Kirby said. "The kid did an amazing job. He kind of exposed some of the stuff we need to work on."

Monroe City answered right back for another score that was set up by a 72-yard pass from Hays to Chapman. Elmer Mendez-Martinez then scored on a short touchdown run.

Joshua Talton led Monroe City with 244 yards rushing on 17 carries. Pennewell had 56 yards on 11 carries. Utterback had 15 carries for 70 yards.

Kirby said Monroe City will work on improving aspects of their game going into next week.

"We are going to look at the film to see what (Clark County) is doing offensively and defensively," Kirby said. "We want to improve our offensive line and defensive line. Try to correct a couple of things with our secondary and linebackers on defense. We had a couple of mishaps on special teams and we got to try to get better there."