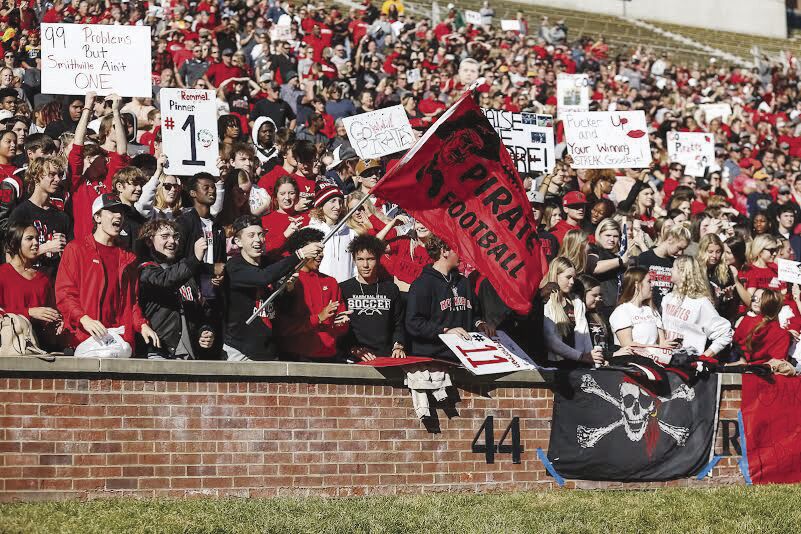 Hannibal fans show their support for the Pirates during the Class 4 Show-Me Bowl at Faurot Field on Friday. 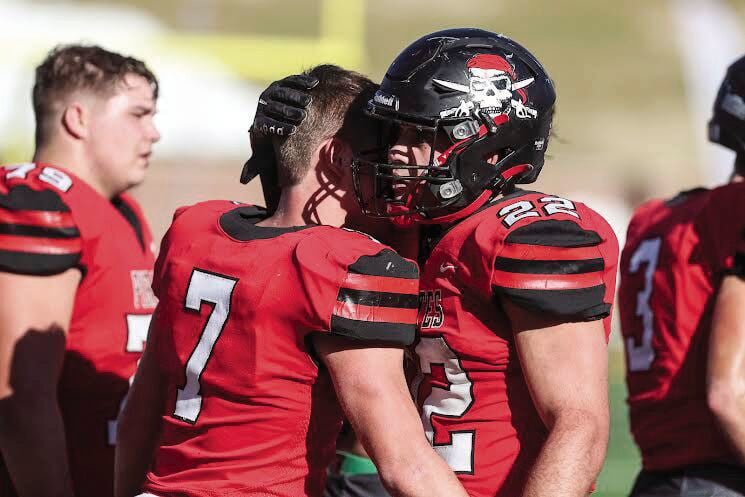 Hannibal fans show their support for the Pirates during the Class 4 Show-Me Bowl at Faurot Field on Friday.

COLUMBIA, Mo. — Regardless of what happened in the Class 4 Show-Me Bowl, it was a historic season for the Hannibal Pirates.

The boys in red-and-black gave the community of Hannibal a season to remember with plenty of excitement.

“You cannot say enough about the town of Hannibal,” said Pirates head coach Jeff Gschwender. “It give you goosebumps to tell the truth. I’ve never seen anything like it as far as the support. People who are willing to travel, especially at such an early time of the day. I couldn’t be more proud of where I’m at right now.”

It was a season full of shattering records and achievement.

Hannibal recorded its eighth undefeated regular season in school history and won its second straight district title. This year’s Pirate team was only the second team to advance to the state championship game, matching the 2006 squad.

“It was a great (season), you know,” said Hannibal senior safety/tight end Kaiser Greenwell. “We worked hard all summer ... and we all knew what we wanted to do. Fell a little bit short today. Props to Smithville. They played a great game and I think we just didn’t play our best game today.”

“Obviously I would had liked to win the (state title) game, but am left with all of the memories from the regular season,” Watson said. “We had won the most games in Hannibal history. So that’s good. We broke a lot of records ands stuff, but we didn’t win today.”

Setting the stage for Williams and Watson’s heroics this season were the offensive line. Hannibal had four lineman selected to the All-Conference team this year, tackles Caden Selle and Austin Wilhoit, guard Xxavion Washington and center Ryan Ross.

“Through this whole journey I met a lot of people,” Selle said. “People I call brothers now. I couldn’t be happier with the journey. We have came a long way.”

Junior middle linebacker Ashton Watts was the vocal leader of the defense this year and led a tough linebacking corps that also included Hardy and Clubine.

Senior cornerback Markahl Humphrey had a knack for coming up with big interceptions this season, like the pick he had late in the second quarter against Smithville. Powell excelled as the other starting cornerback in a strong secondary that also included Greenwell and Williams.

“I would like to thank all of the seniors because they just came in and were role models for this whole team,” Williams said. “They took everybody under their wing and set an example for what Hannibal football is. We just couldn’t have asked for better seniors.”

Pirate fans showed up well to road games this season. They had a large contingent of fans at Bonne Terre for the Class 4 state semifinal against North County last Saturday.

It was an even bigger crowd of Pirate fans at Faurot Field in Friday’s Class 4 Show-Me Bowl, with the Hannibal sea of red outnumbering the Smithville green in the stands.

“It was definitely nice to see the city of Hannibal come together and have our backs throughout the year,” Williams said. “It just really influenced us to play our hearts out and play a good game. Props to Smithville, they are a great team.”

Greenwell wanted to thank the Hannibal community in the postgame press conference.

“We had a ton of fans here today,” Greenwell said. “We traveled well today and they’ve been supporting us all season long from the opening game in Helias. The town just loves football and they like to support us. Our sendoff this morning was great.”

The Pirates will return Watts next season to anchor the defense. Hannibal also returns All-Conference selections Wilson and Jack Parker to the defense.

Hannibal also will have two more seasons of excitement with Williams, who has been an electrifying player in all facets of the game.

This is the most talented group of high school football players I have covered as a sportswriter and they are a good bunch of kids as well.

To close out this article, I would like to say that the community should be proud of this year’s Hannibal football team. It battled through some adversity and gave the fans a lot to cheer about.