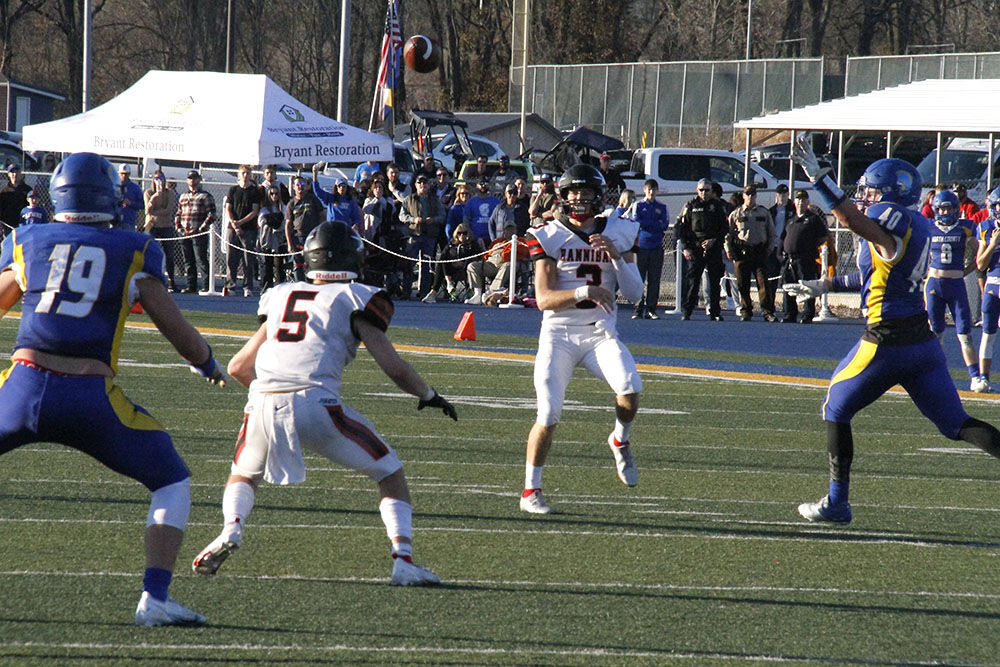 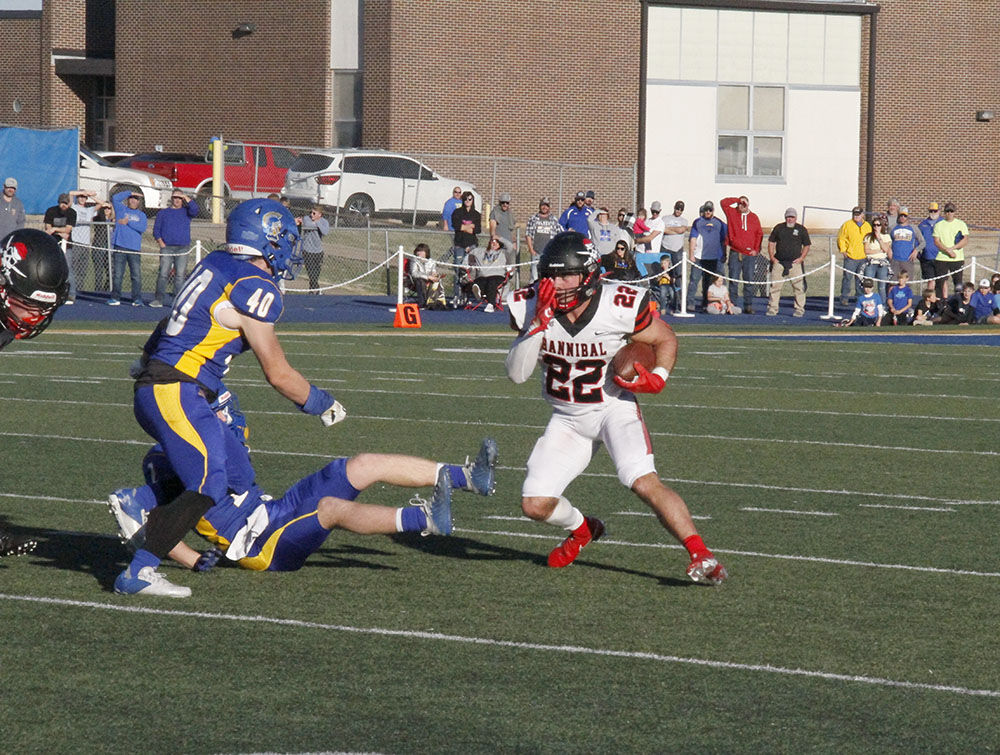 Hannibal running back Aneyas Wiliams jukes past a North County defender during the Class 4 state semifinal game in Bonne Terre on Saturday, Nov. 27.

Hannibal running back Aneyas Wiliams jukes past a North County defender during the Class 4 state semifinal game in Bonne Terre on Saturday, Nov. 27.

HANNIBAL -- There has long been a love for football in Hannibal with the community having long-standing support for the red-and-black on the gridiron.

There's been an extra sense of excitement around Hannibal this week as the 13-0 Pirates chase the state championship in the Class 4 State Show-Me Bowl on Friday at 11 a.m. at Faurot Field in Columbia.

Hannibal brought a large contingent of fans to Bonne Terre last Saturday, when the Pirates defeated North County 42-26 in the Class 4 state semifinal.

"The community has been outstanding," said Hannibal head coach Jeff Gschwender. "That's one good thing about Hannibal. The support we get from the community, from the businesses and even people who don't have kids playing or any direct ties to the team. I think the success of this team this year has really brought the community together."

There figures to be plenty of Pirates fans in the crowd at Faurot Field on Friday when Hannibal battles Smithville (12-0) in the Class 4 State Show-Me Bowl.

The players and coaches are also excited about getting to play on Faurot Field to compete for the state title.

"The kids are really excited about it," Gschwender said. "There's already a lot of hype for the game and everything with it being the state championship. We are just working on keeping our kids grounded a little bit and just coming at it as just another football game. Making sure we prepare for it as just another football game, so we come out loose, come out having fun and come out playing like we should."

The Pirates will face a Smithville team that had a late comeback to defeat MICDS 40-36 in the other Class 4 state semifinal last Saturday.

The Rams scored in its first five possessions against the Warriors and entered the fourth quarter with a 36-20 lead over Smithville. Warriors quarterback Andrew Hedgecorth led a late surge to help score 20 points in the last eight minutes to secure an incredible comeback for Smithville.

"I texted Smithville coach (Jason) Ambroson after they won and told him congratulations," Gschwender said. "It took a lot discipline to come back. He said the kids played until the very last snap."

Hannibal has had to overcome being behind early in each of its last two postseason games themselves, being down to both West Plains and North County in the first half of those games.

Gschwender added that he expects both teams to play until the final down in the state championship game.

"I thought we did a good job of that last week," Gschwender said. "Just playing every single snap until the end. It doesn't matter what the outcome looks like it's going to be, you've got to play every single snap. Especially with it being this late in the playoffs."

Hannibal also has the offensive weapons needed to win games like this with quarterback Courtland Watson, a strong running game, talented receivers and a stout offensive line that includes four All-Conference selections.

The Pirates also have the luxury of three All-Conference players in the backfield with A.J. Thomas, Tyler Hardy and Aneyas Williams.

Thomas has been the power runner for Hannibal this week and had a four-yard rushing touchdown early in the second quarter against the Raiders last week that tied the game.

Williams has served as Hannibal's home run threat and has re-written the Pirates record book this season. He hold the school's all-time single-season record for 47 overall touchdowns and 24 touchdown receptions.

"Aneyas is a special player and he can make a lot of special things happen on the field," Gschwender said. "The good thing about Aneyas is his work ethic between Friday nights in the practice field, the weight room and just stepping up as a leader. As a (sophomore), he's really stepped up in a leadership role."

Hannibal's defense has stepped up and made big plays when needed throughout their playoff run.

Gschwender said the defensive players have been doing their homework behind the scenes by watching film and working on their technique.

"They are really locking in and making big plays whenever needed," Gschwender said. "We have a lot of talented kids on defense and they are coached really well. Coach (Chris) Nicholas and Coach (Jamie) Hoskins have really come up with (great) defensive game plans and putting guys in the right spot."