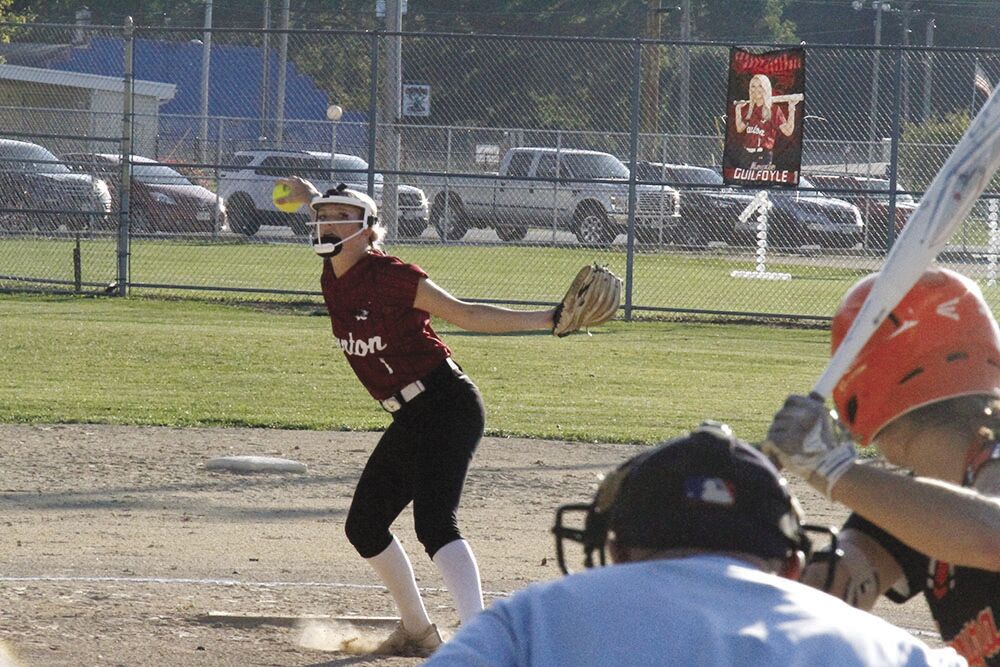 Canton pitcher Kenzie Guilfoyle winds up for a pitch during Monday’s game against Palmyra at Cottonbowl Field. She pitched a complete game shutout with eight strikeouts to earn the win. 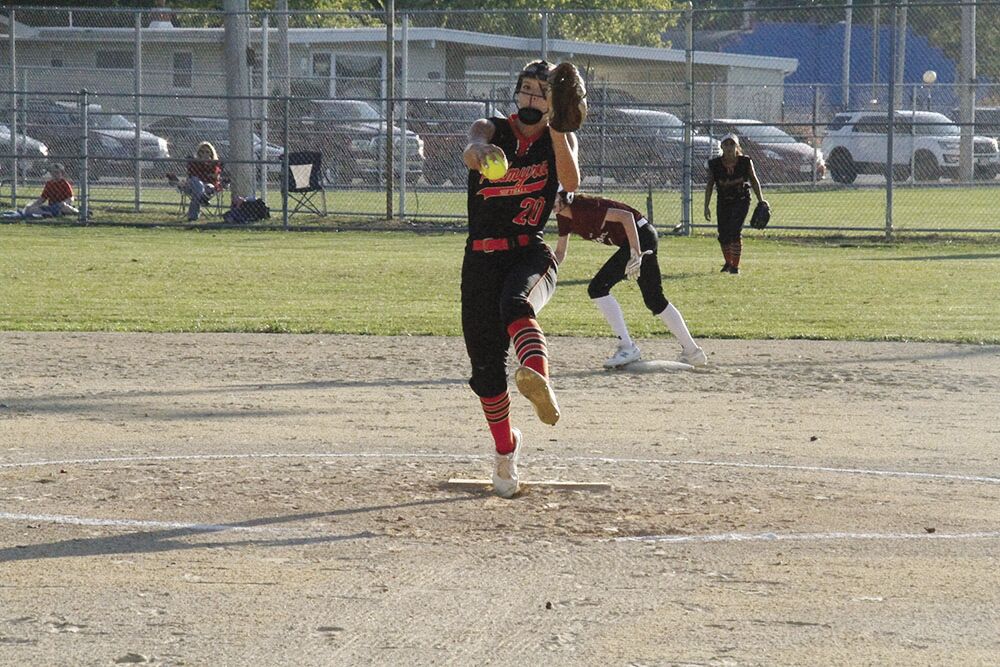 Palmyra pitcher Kennedy Wilson winds up for a pitch during Monday’s game against Canton at Cottonbowl Field.

Canton pitcher Kenzie Guilfoyle winds up for a pitch during Monday’s game against Palmyra at Cottonbowl Field. She pitched a complete game shutout with eight strikeouts to earn the win.

Palmyra pitcher Kennedy Wilson winds up for a pitch during Monday’s game against Canton at Cottonbowl Field.

Guilfoyle pitched a complete game shutout with eight strikeouts in Canton’s 6-0 win. “She pitched amazing,” said Canton head coach Kristyn Caldwell of Guilfoyle’s shutout win. “That’s one of her best games that she’s pitched. Our defense backed her up and she just pitched with a lot of confidence.”

Although Guilfoyle allowed eight hits to Palmyra, she issued no walks and was able to pitch out of trouble.

“She spun the ball pretty well and she mixed speeds,” said Palmyra head coach Lex Meyers of Guilfoyle. “We could not hit the changeup tonight.”

Meyers added that Palmyra was unable to get a key hit.

“We had (eight) hits and they were sporadic,” Meyers said. “We would get a hit and nobody’s on and get a hit to leadoff an inning and couldn’t score. That hasn’t happened to us for awhile.”

Canton scored in the first inning when Macie Fisher got a leadoff single, stole second, then stole third and scored on a throwing error.

Fisher went 2-2 with a walk, two runs and two stolen bases, while being Canton’s sparkplug for rallies.

“She’s a good leadoff hitter,” Caldwell said. “Her speed helps us a lot and gets people rattled. Really sets the tone for the game.”

Palmyra had their best opportunity to score in the sixth inning when Abbey Redd and Bella McBride had singles to start the inning. Guilfoyle then got three straight outs to end the threat.

“I think we struggled to hit spots early and (Canton) capitalized on it,” Meyers said.

The Lady Tigers added two more runs in the second inning. Emma Hultz doubled, Kinsey Biggerstaff walked and were driven in by a two-out double by Macy Glasgow.

Canton was able to get a secure lead in the fourth by scoring three runs. With the bases loaded, Kielyn Ott hit a three-RBI triple to drive in Biggerstaff, Glasgow and Fisher.

“We had some key hits from girls who haven’t met their potential yet,” Caldwell said. “Two freshmen that just broke it open.”

“We are back at it (Tuesday),” Caldwell said. “We have four games and I’m hoping to mix our pitchers in to help get Kenzie some rest. Just take it one day at a time.”

“We have a busy week, which is nice,” Meyers said. “We’ve got Troy on Wednesday at home and Centralia Thursday. So I hope we can rebound at the plate.”