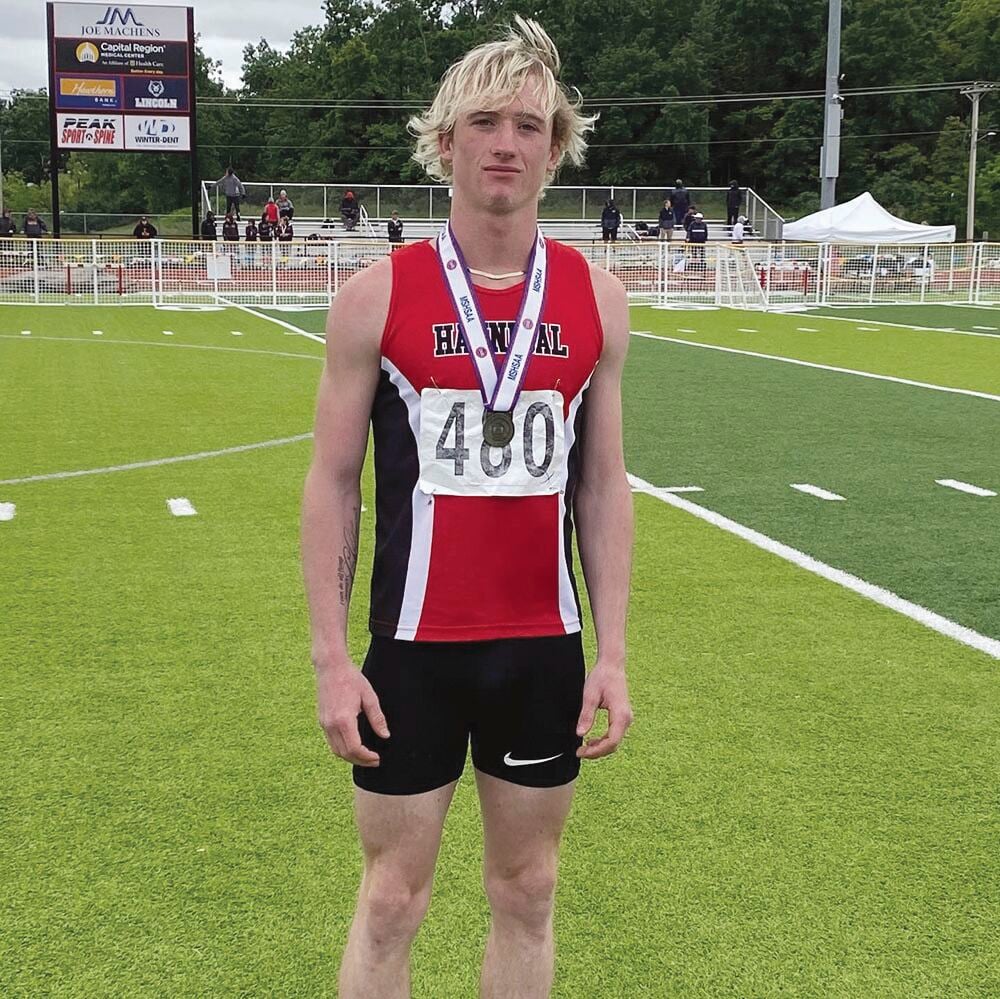 Hannibal junior John Clubine poses with his first-place medal in the boys javelin on Friday at Adkins Stadium in Jefferson City. 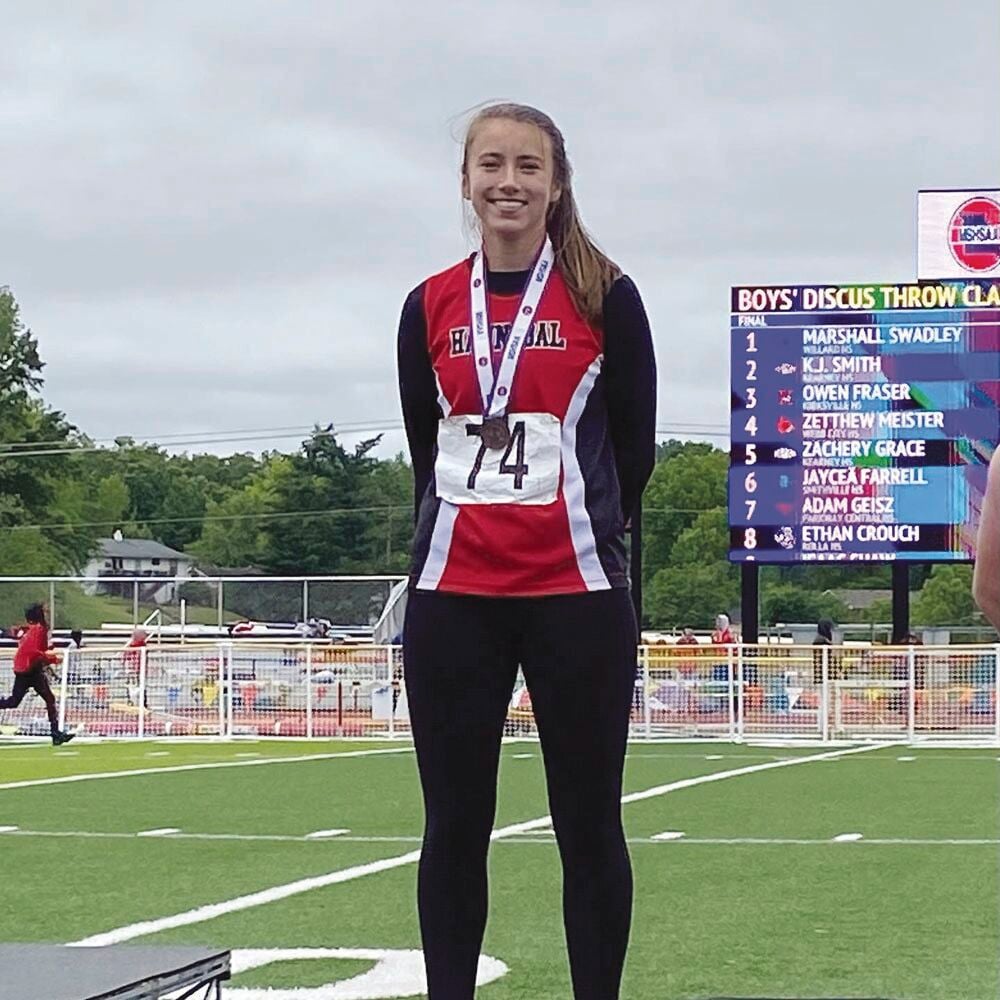 Hannibal sophomore Nora Hark earned a fourth-place medal in the girls javelin on Friday at Adkins Stadium in Jefferson City. 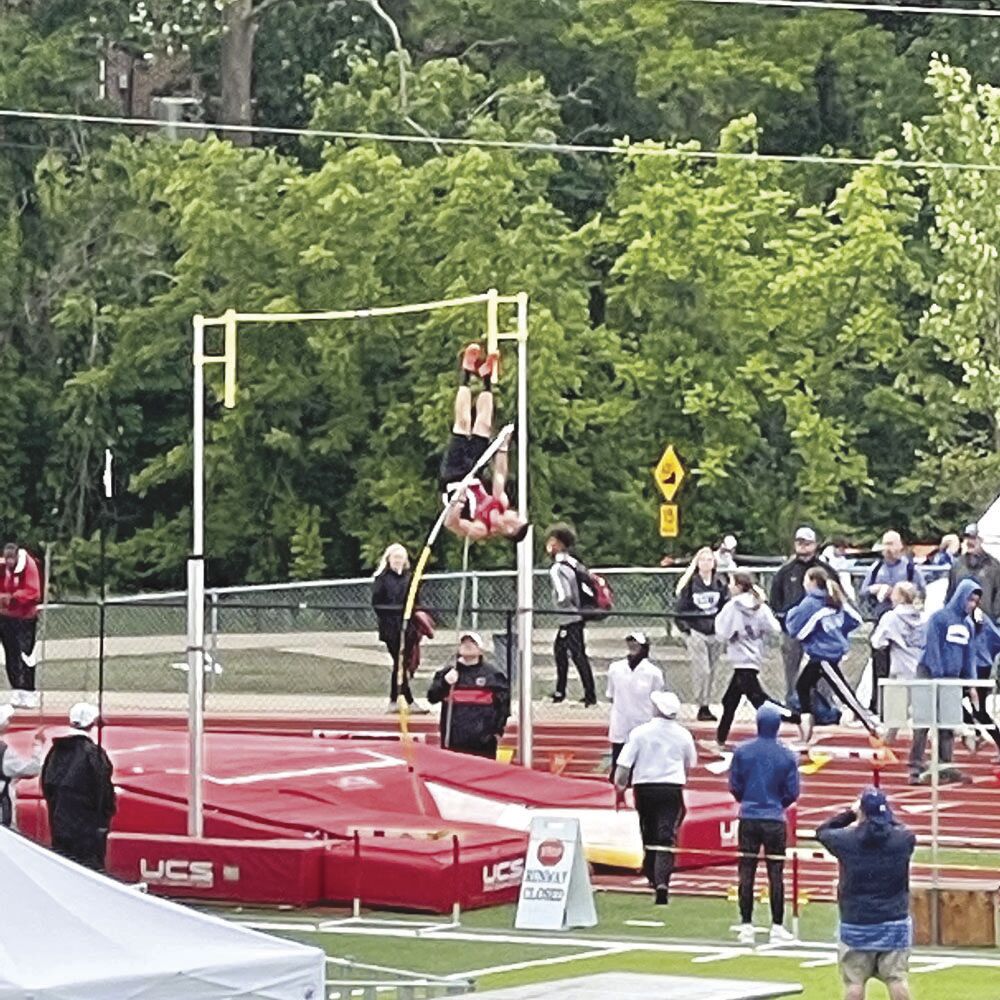 Hannibal junior Kaiser Greenwell competing in the boys pole vault at Adkins Stadium in Jefferson City on Friday. He finished third overall in the event.

Hannibal junior John Clubine poses with his first-place medal in the boys javelin on Friday at Adkins Stadium in Jefferson City.

Hannibal sophomore Nora Hark earned a fourth-place medal in the girls javelin on Friday at Adkins Stadium in Jefferson City.

Hannibal junior Kaiser Greenwell competing in the boys pole vault at Adkins Stadium in Jefferson City on Friday. He finished third overall in the event.

JEFFERSON CITY, Mo. — Hannibal came away with some hardware at the Class 4 state track and field meet at Adkins Stadium in Jefferson City on Friday.

The Hannibal boys team placed 10th overall and the girls team placed 19th overall, with the teams combining for one individual championship and five medals.

“We had a lot of good performances today and we get a lot of these kids back next year,” said Hannibal track head coach Jeff Gschwender. “Now that they’ve had a taste of what it’s like to compete at this big track meet, I can tell you they are ready for next year.”

Hannibal junior John Clubine won the boys javelin with a top throw of 54.23 meters, which was in his fourth and final attempt.

“He had a great week of practice and came out and just competed,” Gschwender said. “That’s all there is to it. He beat the kid he wanted to beat in his last throw and set a school record.”

Gschwender credited javelin coach Kesley Scherder for the success of the javelin throwers at the state meet.

“Coach Scherder is a phenomenal javelin coach, as you can tell with the success we had in javelin,” Gschwender said. “Those girls just love going up to the hill during practice. They were extremely prepared going into the meet.”

Gschwender said it was great to see Bross close out her high school career with a good performance at the state meet.

“Cami came out and jumped around where she has been jumping all year,” Gschwender said. “It really came down to near misses. If she would had cleared that last height, she had a real good shot of winning it. She was a little disappointed by not winning it, but that’s the competitive nature she has.”

Greenwell placed 11th in long jump and 13th in triple jump, missing out on medals for both events.

However, Greenwell placed third overall in the pole vault with a top distance of 4.52 meters to earn a medal.

“He’s a gamer,” Gschwender said. “He prepares himself right, he focuses properly and he came out and jumped the best he has all year. He put himself in a position to compete for the championship with some of his pole vaults.”

Pirates freshman Aneyas Williams placed fourth in the boys 200-meter dash with a time of 22.19 seconds. He was just 0.19 seconds away from the winner of the race, Hillsboro senior Sam Wright.

“Aneyas is just on a another dimension when it comes to athleticism,” Gschwender said. “He got fourth place as a freshman in the 200 and was disappointed in himself that he didn’t win it.”

Williams was also part of the two Hannibal relay teams at state, along with Daylan Reading, Tyler Hardy and Sheldon Bergheger.

Hannibal entered the boys 4x200-meter relay as a top-three seed and were disappointed with the results after a couple of bad handoffs and bad legs in the race.

“That just shows you the guts that they have and their ability to handle some adversity,” Gschwender said. “A lot of kids in that situation would had been bummed out hte rest of the day, especially the same four kids. They came back out in the 4x100 and almost won it.”

Reading also competed in the boys discus and placed 14th with a top throw of 38.9 meters.

“Daylan had a couple of other events he did well in with the relay races,” Gschwender said. “I think he was just happy to be here in the discus and he threw ok. It’s just there were some really good throwers here.”

“They really turned it on in the second half of the year and got focused,” Gschwender said. “They were really hitting their best times in the past three weeks.”

Hannibal freshman Olivia Mears placed 12th in the girls discus with a top throw of 31.29 meters.

Gschwender said that assistant coach Josh Baughman did a good job of getting the throwers ready for the state meet.

“You just don’t see a freshman throwing in shot put or discus at the state track meet,” Gschwender said. “We were extremely proud of the way she performed this year. Olivia is one of the most competitive girls on our team. You better believe she is going to work and get better during the next three years.”