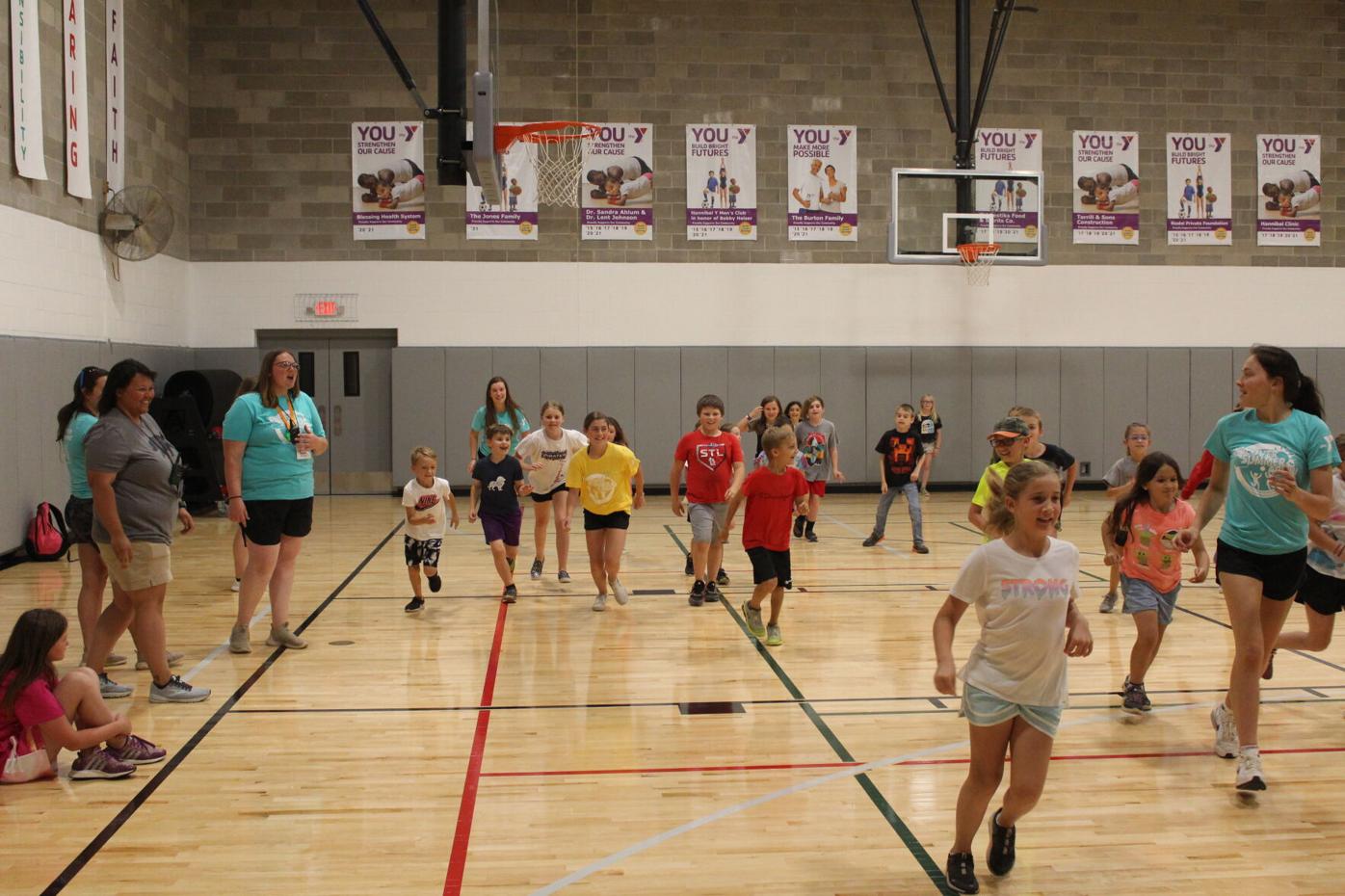 Children in the third-sixth grade group of the YMCA of Hannibal Summer Camp program enjoy the upgraded gymnasium while performing fast-paced physical activities on Wednesday. The yearlong project was the culmination of teamwork and community support including donations and memberships, along with efforts from members of the Board of Directors and the Buildings and Grounds Committee. 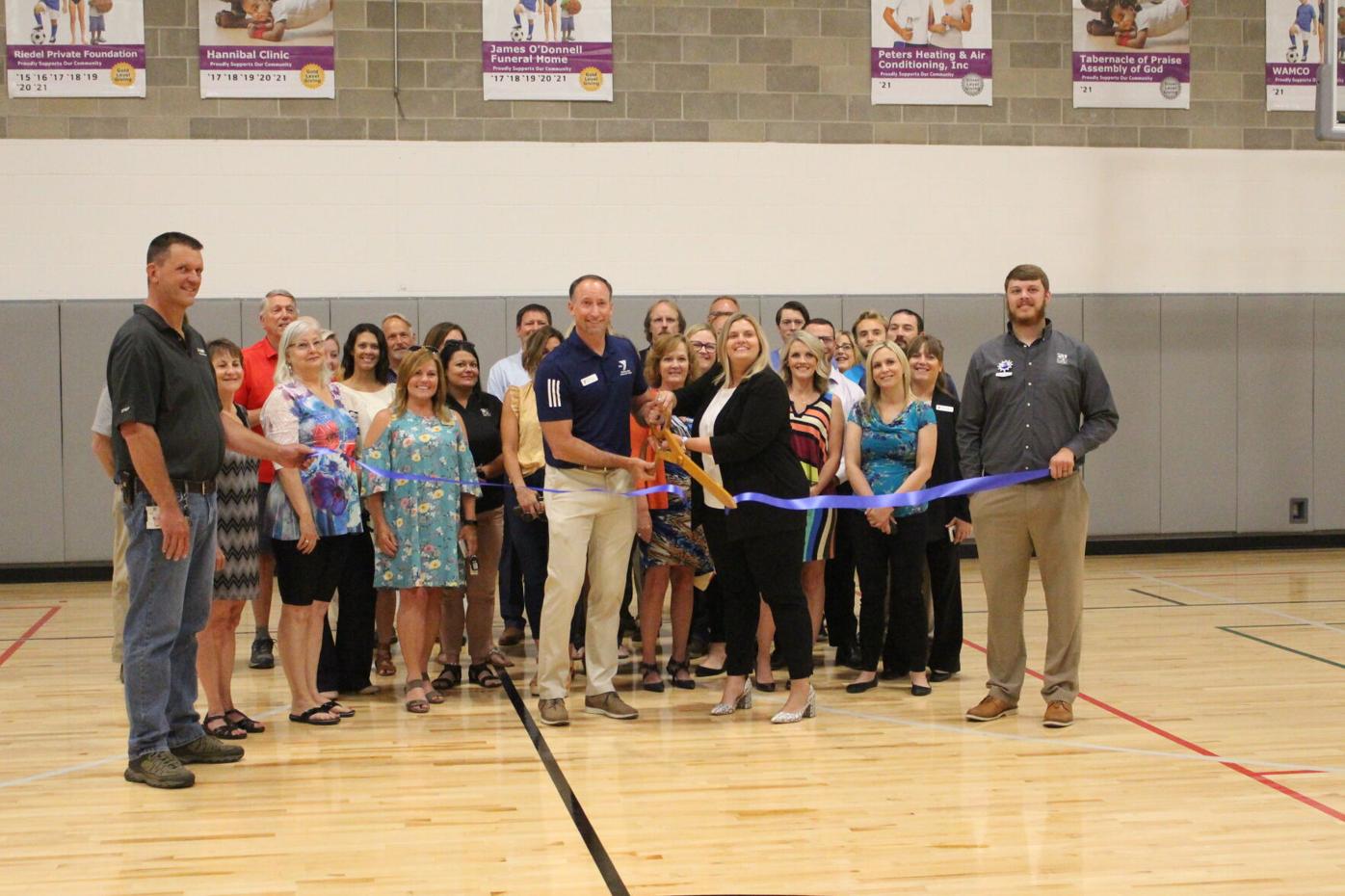 Children in the third-sixth grade group of the YMCA of Hannibal Summer Camp program enjoy the upgraded gymnasium while performing fast-paced physical activities on Wednesday. The yearlong project was the culmination of teamwork and community support including donations and memberships, along with efforts from members of the Board of Directors and the Buildings and Grounds Committee.

HANNIBAL — The official ribbon-cutting for the upgraded gymnasium at the YMCA of Hannibal was greeted by warm applause, followed soon by laughter and fast-paced physical activities from members of the Summer Camp program.

Eric Abts, CEO of the YMCA of Hannibal, said the project began with some upgrades to the baskets and lighting system — soon blossoming into a full upgrade with a new maple floor, padding. remote-controlled divider curtain and baskets, upgraded HVAC system and new scoreboards sponsored by Poage Chevrolet Buick. A crowd of Hannibal Area Chamber of Commerce ambassadors joined fellow YMCA supporters to cut the ribbon for a project made possible by teamwork and dedication.

The new floor is crafted from maple, with a floating plywood level beneath. Abts said the project’s timing came before the substantial increase in the cost for wood. Altogether, the gymnasium upgrade cost came in just under $200,000.

Becca Immegart, senior director of business services, said lines on the floor for pickleball play have joined the lines for basketball and volleyball, part of an ongoing partnership with the Hannibal Parks and Recreation Department for days when it is too hot to play outside or the Admiral Coontz Recreation Center is flooded.

Abts said the decision to make the full upgrade was inspired by the fact the gym “is the number one place kids hang out in”. Students come after school, and summer camp participants use the facility each morning and afternoon.

“We felt like if we were going to put some money into our facility, what better place than our gymnasium?” Abts said.

Abts said the new floor was part of the final stage of the upgrades. The previous core rubber floor was drying and cracking in some areas. The Board of Directors made the decision for the wood flooring to be installed over the top of the rubber core instead of replacing the entire rubber layer.

“For those athletes in the crowd, this is a much better playing experience for basketball or volleyball. We’re super happy with it,” he said. “The minute we opened it up for members and the kids, we had basketball playing all night long and all day, and it’s been wonderful.”

Board of Directors Vice President Courtney Bareis thanked everyone for coming to the event, and she encouraged people to return to see the continuing improvements. Outside, crews with Timbrook Construction were performing pavement work to the front patio area. Bleigh Construction provided the concrete.

Abts commended everyone who worked together to make the new upgrades a success.

“First of all, the community of Hannibal makes everything we do at the Y possible — donations, supporting us through donations and programming, all of our volunteers, the Board of Directors and our Building and Grounds Committee that kind of walked us through the process and made sure we picked the right vendors to make this project happen,” he said.

Children in the third-sixth grade group of the YMCA Summer Camp filed into the gym, participating in a series of activities and running to their right after hearing “Starboard!”, then switching directions upon hearing the word “Port!” “Beached whale” caused everyone to drop to the floor, clutching their feet as they laid on their bellies. Then, they jumped back up again, at attention and ready for the next activity.

Kayla Tiller, assistant director of child development, said the children were having fun each day in the upgraded gym.

“The kids are loving it,” she said.