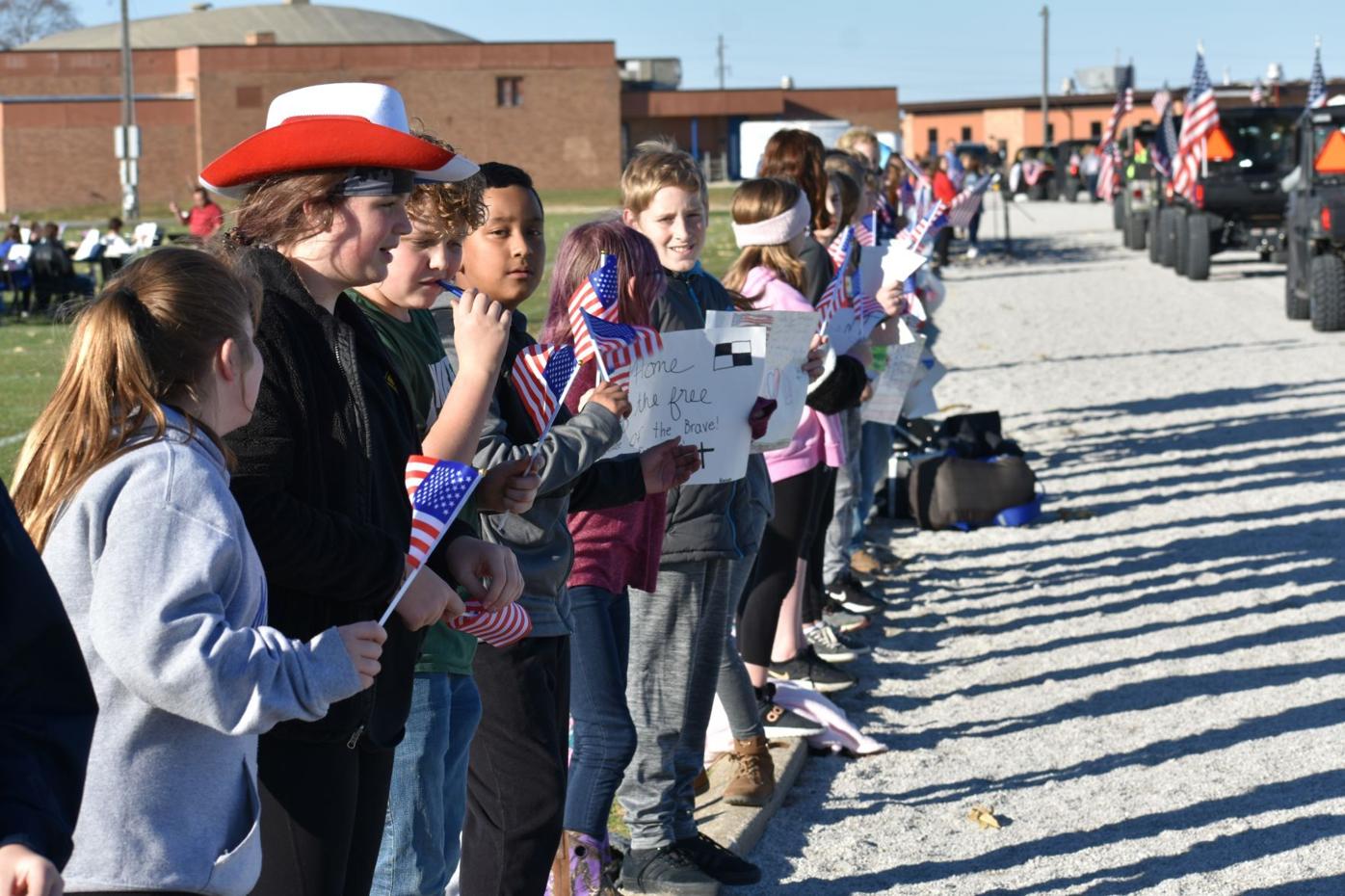 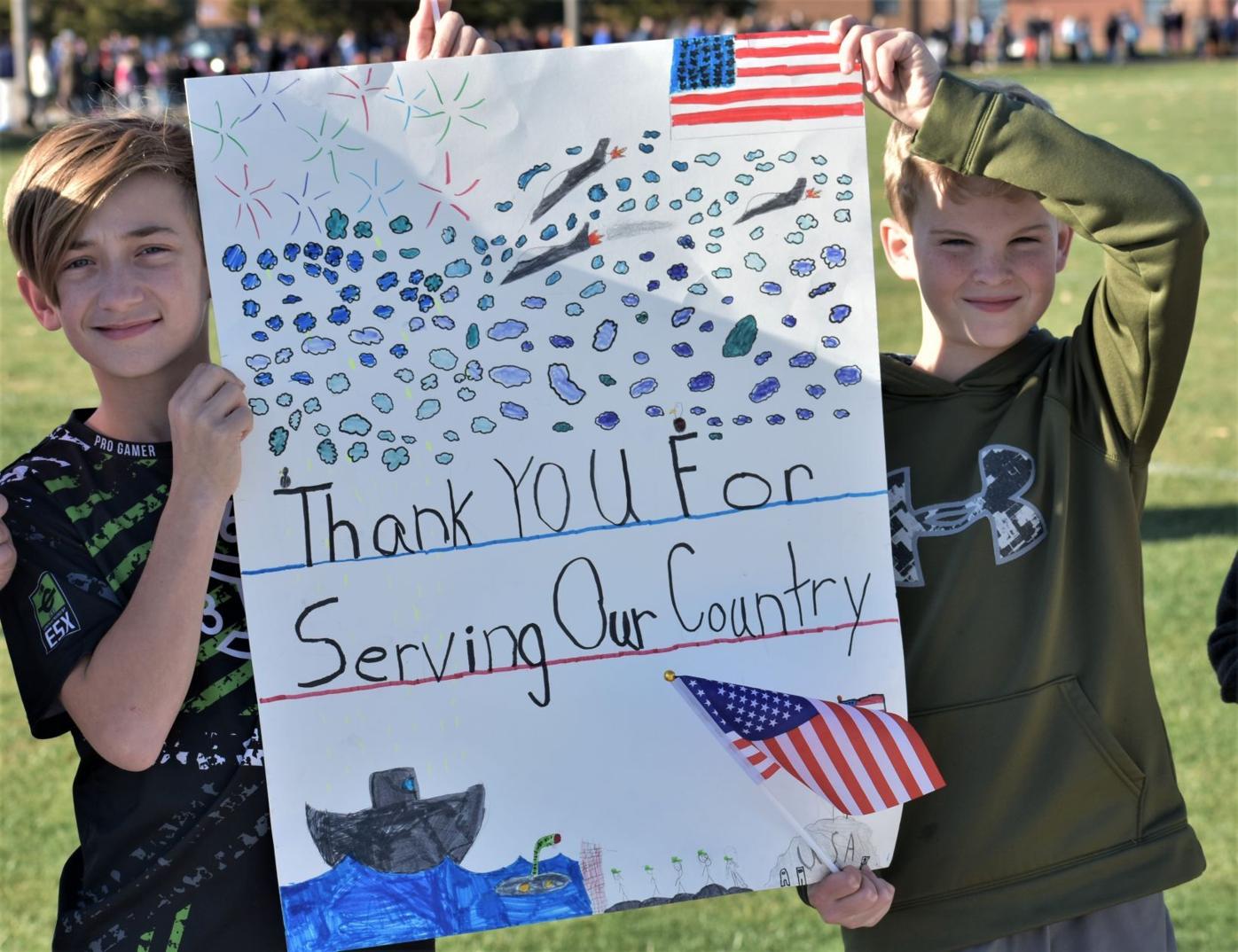 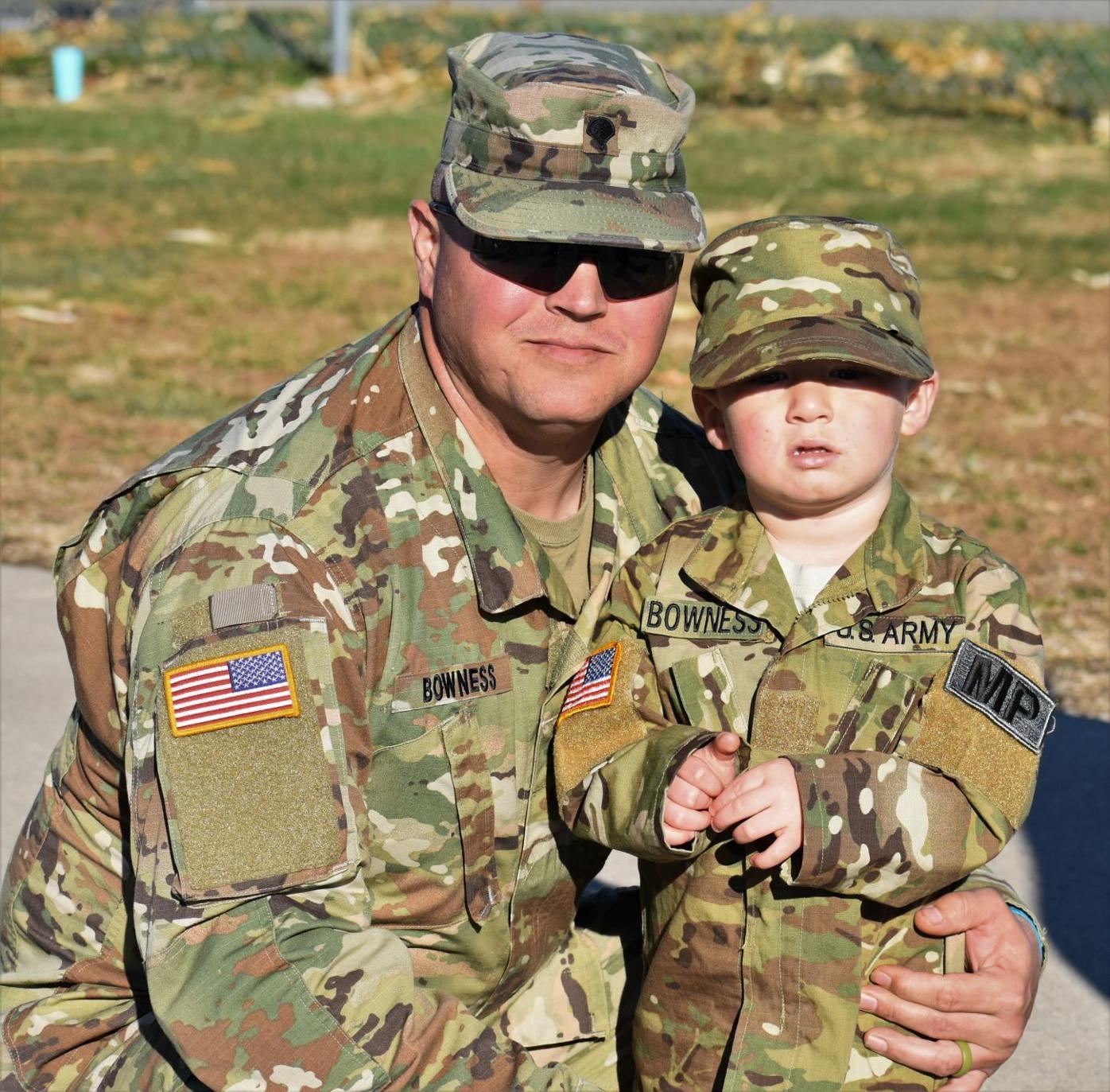 Specialist Brian Bowness, an Army veteran now with the Missouri Army National Guard, attending the Veterans Day celebration with his wife, Amanda, and his son, Kiowa, 2, who was dressed in the identical Army battle dress uniform that his dad was wearing. 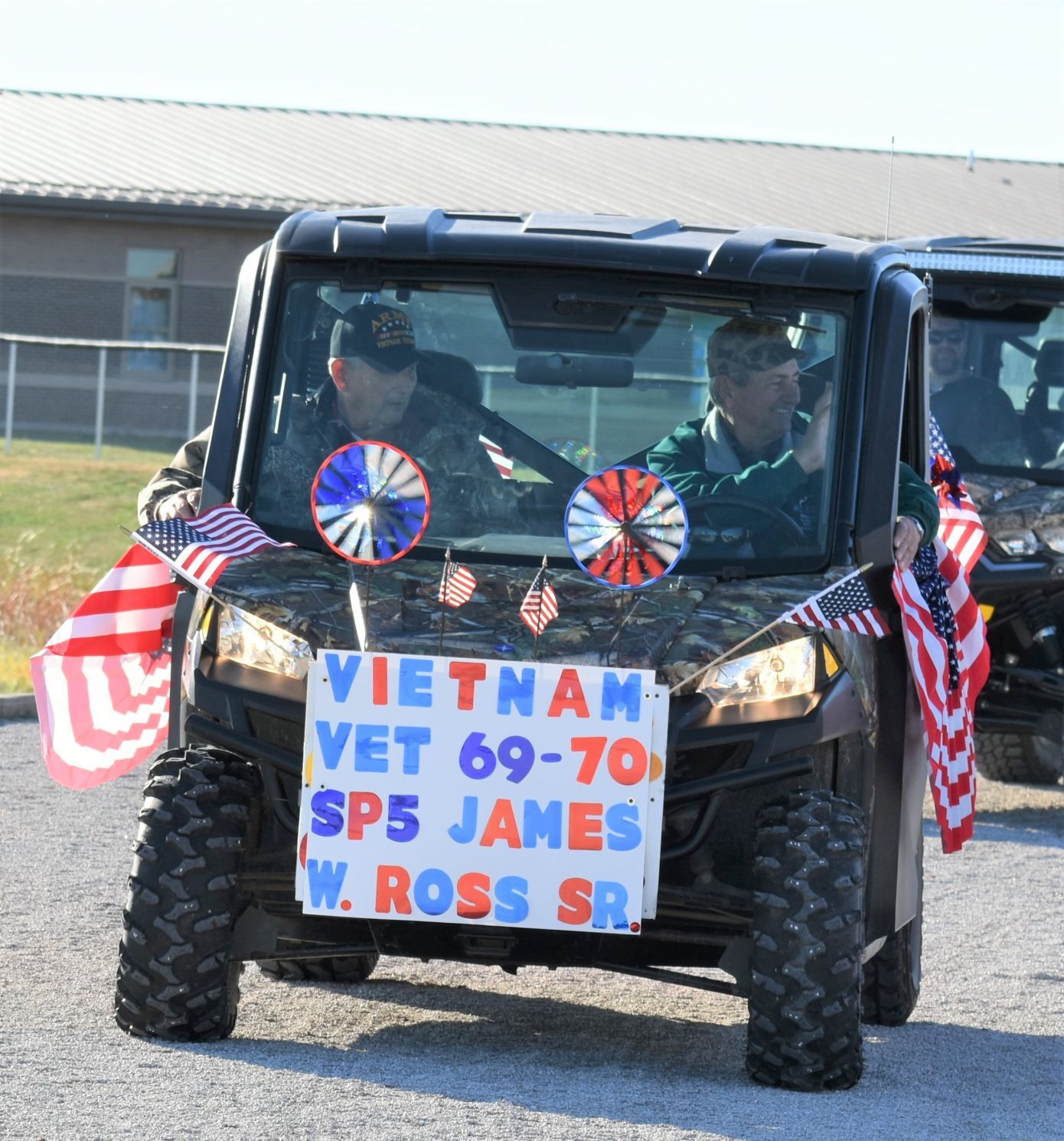 Specialist Brian Bowness, an Army veteran now with the Missouri Army National Guard, attending the Veterans Day celebration with his wife, Amanda, and his son, Kiowa, 2, who was dressed in the identical Army battle dress uniform that his dad was wearing.

CENTER, Mo. — Students at Ralls County Schools did not allow a pandemic to dampen their enthusiasm to honor veterans and active service members on Wednesday.

Elementary, junior high and high school students lined up around the football field to cheer as about 40 veterans were escorted in a parade of utility vehicles around the track.

The scene was a sea of red, white and blue. Students waved flags, displayed banners they created and cheered loudly as each veteran was introduced by Mark Twain High School junior Elizabeth Trower, who was the event announcer.

After making a trip around the track, the veterans lined up in front of the students and their teachers to be honored with remarks and a commemorative coin that was passed out by Ralls County Western District Commissioner John Lake.

Gary Nelson served in Vietnam from 1969-70 in the U.S. Army. He fought in a war that was immensely unpopular in a nation that was split by protests across the nation.

For Nelson and the estimated 2.7 million men and women who went to Vietnam, returning home after a combat tour was a decidedly low-key affair.

“We had nothing like this,” Nelson said. “This is just so nice. It means a lot to be recognized.”

Nearby, Dennis McMillen, owner of Center Locker and mayor of Center, took a break from the busy season of processing deer meat to be honored for his service in the Army during the Vietnam War.

“This is special,” McMillen said, “there was nothing like this when we were younger.”

But much younger veterans were present to be honored, too.

Specialist Brian Bowness, an Army veteran and current member of the Missouri Army National Guard, was at the celebration with his wife, Amanda, and his son, Kiowa, 2, who was dressed in the identical Army battle dress uniform that his dad was wearing. Kiowa’s uniform even had the same nametag and patches.

“This is such a nice day for all us,” Bowness said as he gestured to other veterans.

Bowness, who works as a Missouri Department of Corrections officer at the Vandalia women’s prison, is a veteran of Operation Iraqi Freedom.

Fellow Iraq veteran Rob Utterback, who was medically retired from the Army in 2014, said that it was difficult to describe the feeling of having the sacrifice that he and other servicemen and women recognized.

“It is humbling,” said Utterback, who also served in the Gulf War and Afghanistan. His daughter, Kayla, teaches in the Ralls County School District.

For Trower, it was a special day. In addition to her emcee duties, Trower was there to honor her uncle, Tom Trower, an Army veteran, and her father, Jeff, who is a sergeant in the Missouri Army National Guard.

“I am proud of them,” Trower said as she stood between the men for a photo.