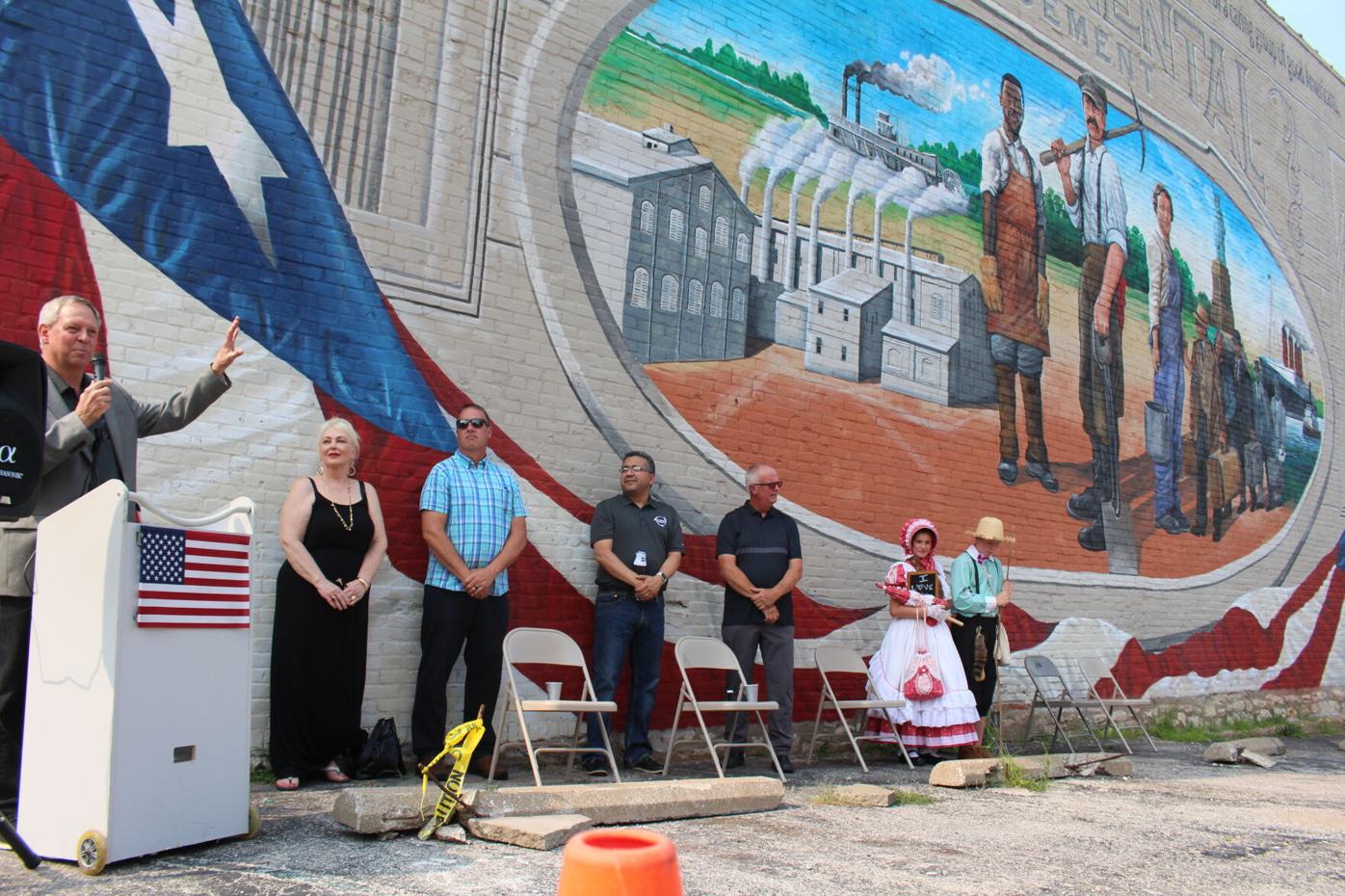 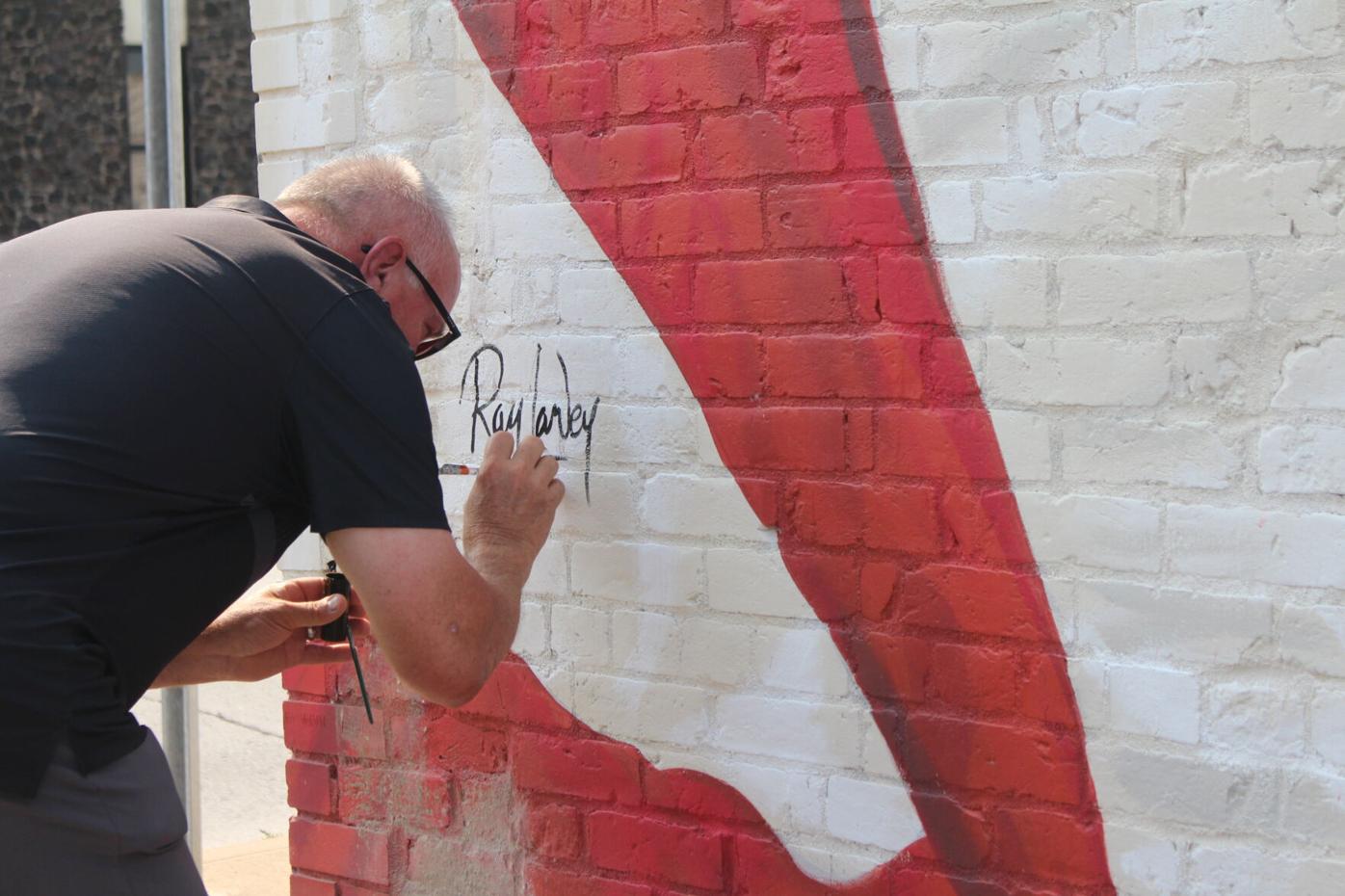 Artist Ray Harvey signs his mural at 116 N. Third St. during a dedication ceremony Thursday. Continental Cement employees and representatives, former residents of ILASCO and fellow members of the community gathered to celebrate the 61-foot by 30-foot mural honoring immigrants from ILASCO and the Hannibal area, including Continental Cement employees and their work and product being used to construct the Panama Canal and the Empire State Building.

Artist Ray Harvey signs his mural at 116 N. Third St. during a dedication ceremony Thursday. Continental Cement employees and representatives, former residents of ILASCO and fellow members of the community gathered to celebrate the 61-foot by 30-foot mural honoring immigrants from ILASCO and the Hannibal area, including Continental Cement employees and their work and product being used to construct the Panama Canal and the Empire State Building.

HANNIBAL — Celebration was in the air Thursday, as people filled the parking lot and building at 116 N. Third St. for the dedication of the new mural celebrating immigrants from ILASCO and the surrounding region and the building of America through work and product from Hannibal’s historic Continental Cement Plant.

Deborah White, a Nashville, Tenn. resident who grew up in Hannibal, made the call in January that started the expansive mural, reaching out to Continental Cement President Tom Beck. White has commissioned and paid for materials for Ray Harvey’s historic artwork in the past, and he created a 61-foot wide-by-30-foot tall mural depicting a trio of workers, immigrants arriving at Ellis Island and the Statue of Liberty, the Empire State Building and other crucial parts of the nation’s history built by immigrants’ hands and made with products from Continental Cement.

White welcomed everyone to the dedication. Her grandfather and uncles worked at Continental Cement and her family was from ILASCO, and she noted “I have many cousins here today, whether you realize you’re related to me or not.”

“I proposed a mural because of the importance — this isn’t just important here — it’s important for the nation,” she said. “This is what America is about.”

Beck credited White and Harvey for their work, commending them for the murals throughout town reflecting history and patriotism.

“This one jumps to the top of the list from our perspective — there’s a lot of pride behind it,” he said. “To us it’s a reflection of America being built and some of the finer qualities of the hard work that men and women have done over the years.”

Beck talked about how the first Continental Cement plant opened in 1903, when under the Atlas Portland Cement Company. A second-generation plant was built under U.S. Steel ownership in 1960, followed by renovations in 2008. He stressed how the mural reminds everyone of the dedication of Continental Cement employees and other Hannibal area residents who “contributed to the growth and the success of America at large.”

Carl Zupan was among members of the crowd eager to see the mural during its dedication. His family immigrated to America from Croatia, and his father worked at Continental Cement for 40 years. He said it’s hard to believe today, but ILASCO once had a population of 3,000 residents who spoke 11 languages. He gazed up at the mural before the ceremony began.

Mayor James Hark was excited to see the latest example of Harvey’s artwork, and he challenged the school of thought that murals are “kind of a new thing.”

“I tend to disagree. Murals and drawings were done since the ancient Egyptians, and they did their paintings and murals to record history, to record celebrations and to record family lineage,” Hark said. “They built a heritage and the history of our community and the region. And of course the impact of the company that they worked for — Continental Cement — manufactured the cement that went into the Panama Canal.”

Hark commended Harvey, who has become a regular fixture in Hannibal as he crafts murals throughout town, with his most recent mural featuring an American flag and a POW-MIA flag draped around the corner of VFW Post 2446. Harvey was excited to see the large turnout, which included all the employees at Continental Cement and many former residents of ILASCO.

“It’s a testament to the impact that Continental has had on Hannibal in the last 150 years, and it’s also a testament of the support of the citizens for my art. So it’s a win-win,” Harvey said.

Harvey officially dedicated the mural with his signature. He was quick to thank White for her support and love of Hannibal. She expressed her joy during a celebration with surprises from her hometown.

“I grew up here, and I have a great love of the history of Hannibal,” White said. “When I grew up, there were so many magnificent homes and buildings that are gone now.”

Harvey’s artwork is poised to raise awareness about the history of the United States and America’s Hometown for years to come. And White said more historic murals are in the works.

“And so I want young people today to realize the glory of this city and the importance and the history of the United States. There are people that made such a contribution to the country that are from Hannibal, and many people here aren’t aware of it,” she said. “So that’s why historical murals are my push, and just to show appreciation.”