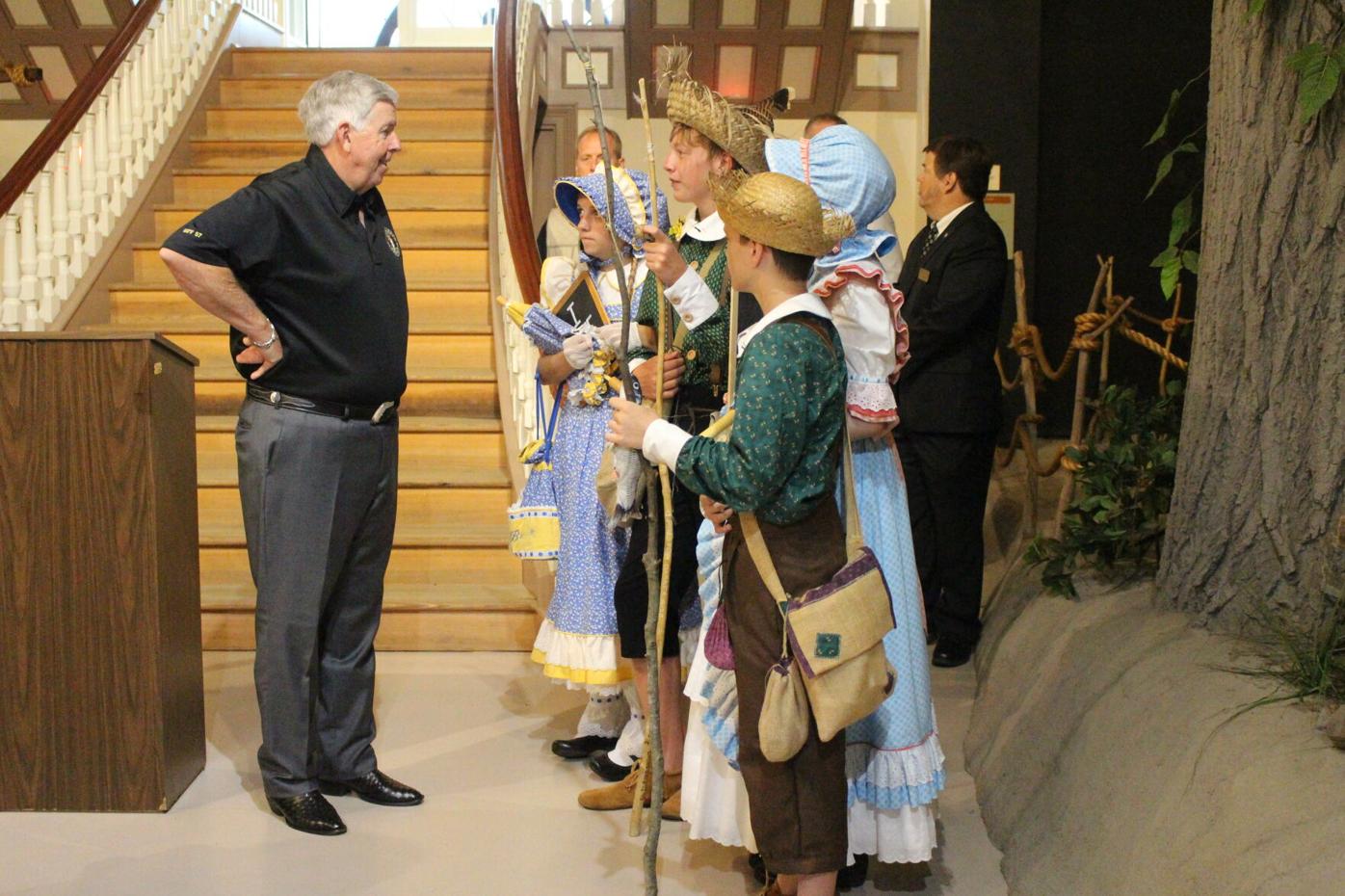 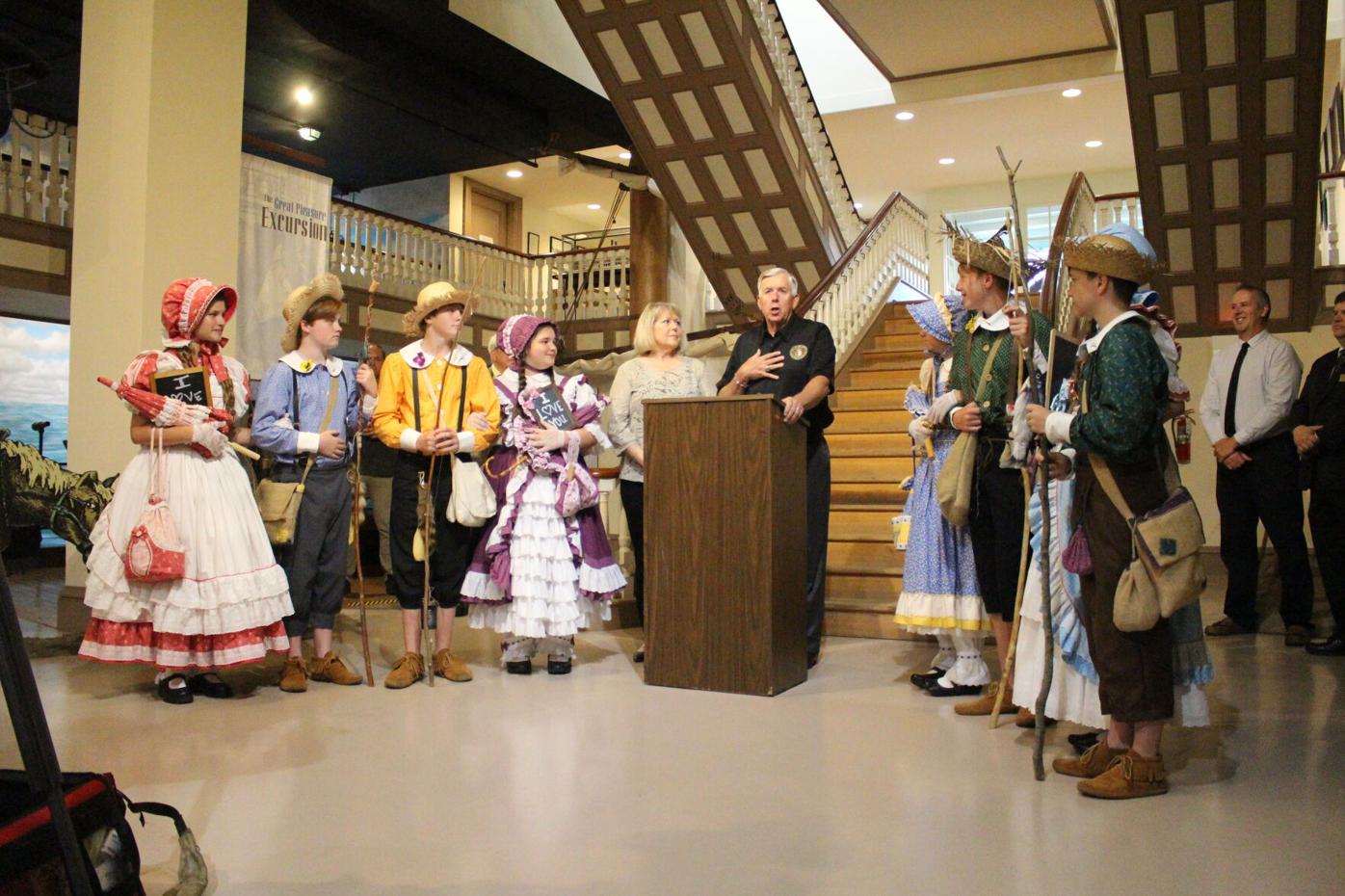 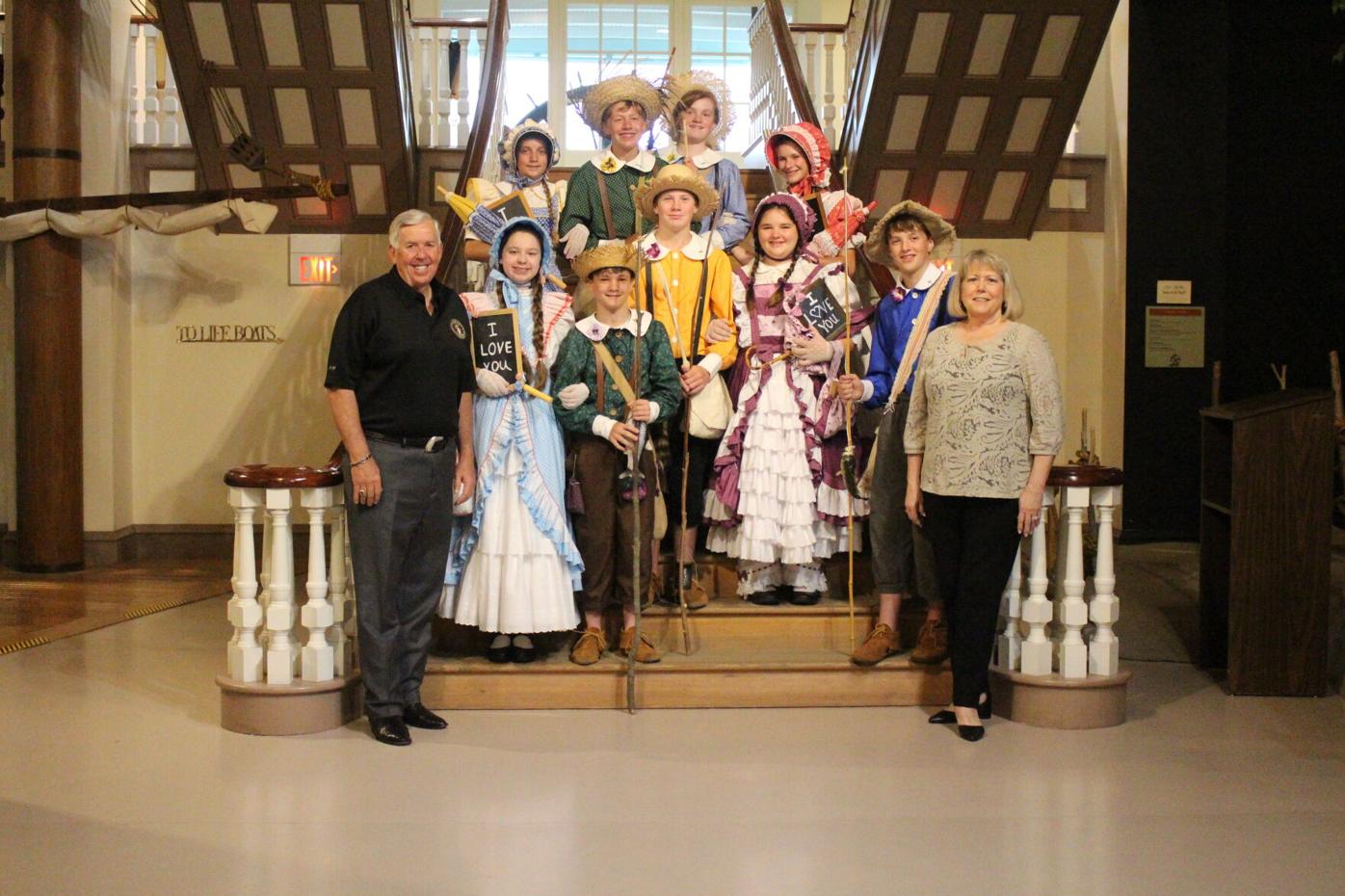 HANNIBAL — Gov. Mike Parson began the second leg of his Bicentennial Tour on Monday with a visit to the Mark Twain Boyhood Home and Museum, talking with Toms and Beckys and celebrating the history of the Show-Me State.

Parson greeted everyone, taking a moment to speak with each Tom and Becky. He and First Lady Teresa Parson visited Liberty, Mo., Kearney, Mo. and Lawson, Mo. on Thursday, and their Monday trip included stops to Shelbina, Mo. and Macon, Mo. Mark Twain Boyhood Home and Museum Executive Director James Lundgren and Curator Henry Sweets welcomed everyone to the event. Sweets talked about how Samuel Clemens brought the region to life in his literature, using humor and reflecting his life’s changes through his works.

Clemens didn’t at first see the wrongs of slavery as a child — his family owned slaves when he was young. As he grew up and traveled, he witnessed the racism and harsh realities of slavery — addressing the issue in “Adventures of Huckleberry Finn”, Sweets explained.

“So in “Adventures of Huckleberry Finn”, he’s taking a look at this institution of slavery and saying it is wrong. And today, it is still a very important work to consider when you’re talking about race relations,” he said.

Twain was a firm supporter of individuality, Sweets said. He further shone a light on racism in “Pudd’nhead Wilson” and wrote about imperialism later in his literary career. Lundgren pledged the museum would continue on its mission to preserve history about Mark Twain and to provide education.

Mayor James Hark said Missourians would not have made it through the past year of the pandemic without “the leadership and the courage of our governor, who stood up against many odds,” noting it is a tough job to make the right decisions for so many people.

“But our governor stood fast, and we can always count on him to take care of the state of Missouri,” Hark said.

Parson began by welcoming all the Toms and Beckys up with him before he spoke. He mentioned he sees the importance of Mark Twain as part of Missouri’s rich history every day he goes to his office as he looks at a picture of the famous author.

“And then when you think of the history of Missouri and the history of Missouri, it’s just part of of who we are,” he said, stressing his numerous achievements have made him “an icon” to many. “But the one thing I will tell that I learned most about him, is his Missouri values. If you look at his writings and you look at who he is, he describes us — he describes you young people today.”

Parson thanked each Tom and Becky for their role of greeting visitors to Hannibal, who hail from 50 to 60 countries each year, along with preserving history with their authentic portrayals of Twain’s famous literary characters.

Parson invited everyone to the Inaugural Ball at the State Capitol on Saturday, Sept. 18. A parade, and a variety of activities are planned to celebrate the Show-Me State. He expressed “how much of a privilege it is to live in Missouri” as he looked at the different communities he would be visiting while observing a big milestone for the state.

Next, he was planning to visit Shelbina, Mo. Parson said Missouri has been through tough times, and will show its resilience again. He has been working with communities and governments like the community of Perry, Mo., “trying to provide all the services we can to those local communities, and we’ll continue to do that.” He said resources like SEMA can be employed, and “we’ll be on the ground helping as much as we can.”

The official Tom and Becky, Jaxson Lay and Greta Welch, enjoyed the chance to celebrate Missouri’s 200th birthday and meet the governor.

“I just think it’s a really great experience that we’re able to meet the governor, and I think it was just a really fun time today,” Welch said.

“It was a really great honor. He seems like a really nice guy who isn’t scared to go around small towns like this and welcome kids like us... We look up to him, and he see us as someone that he can trust,” Lay said.