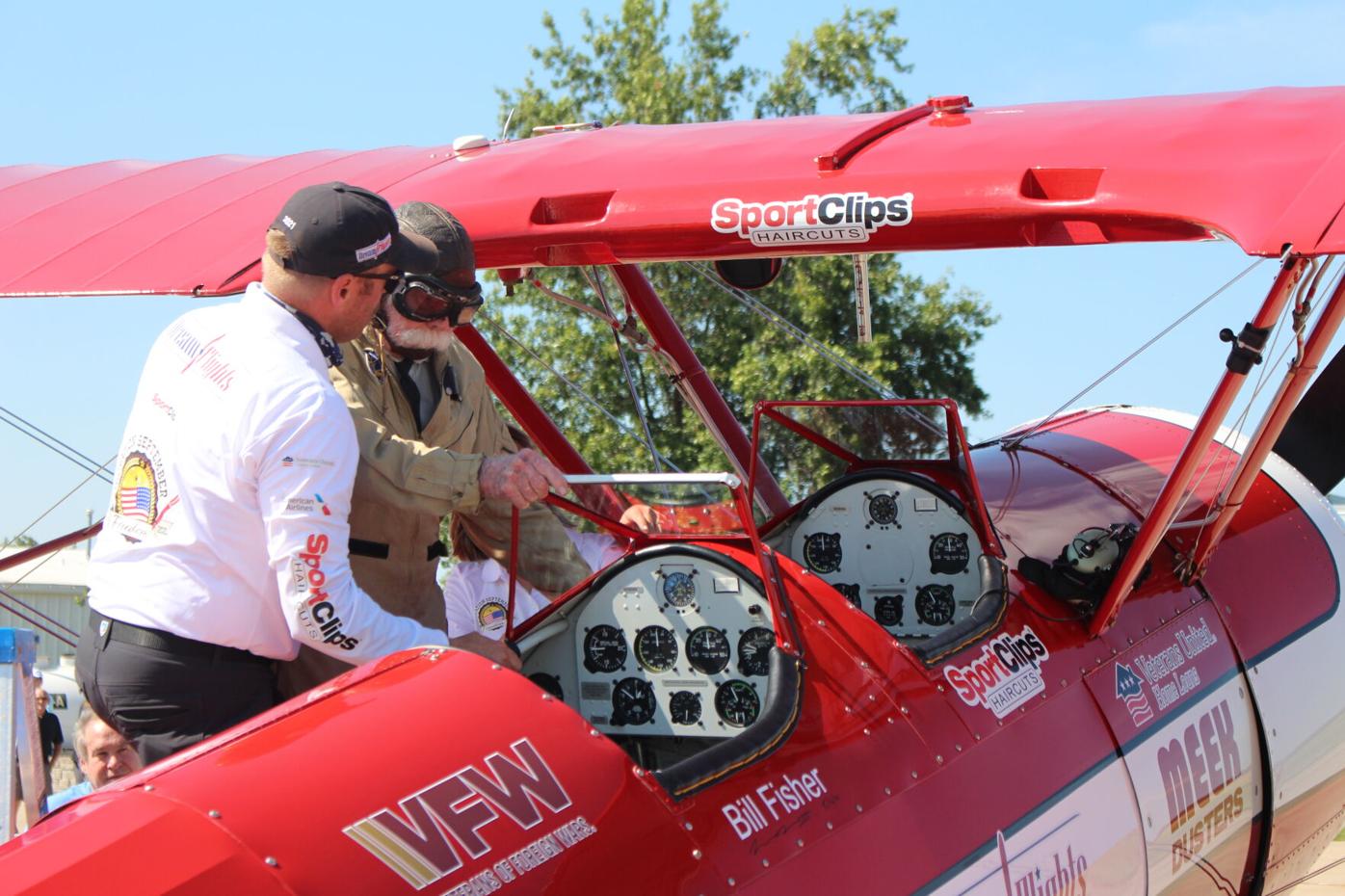 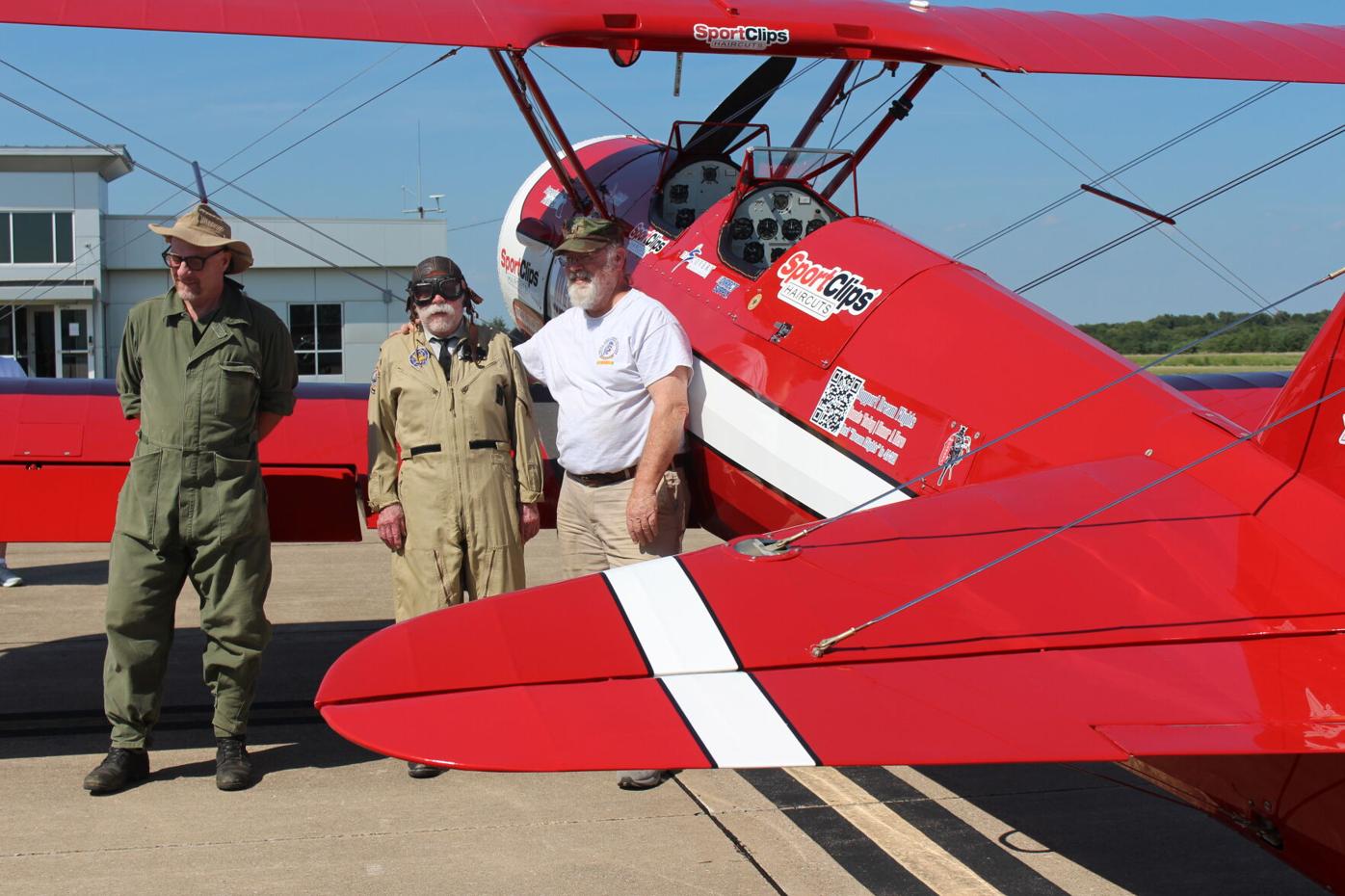 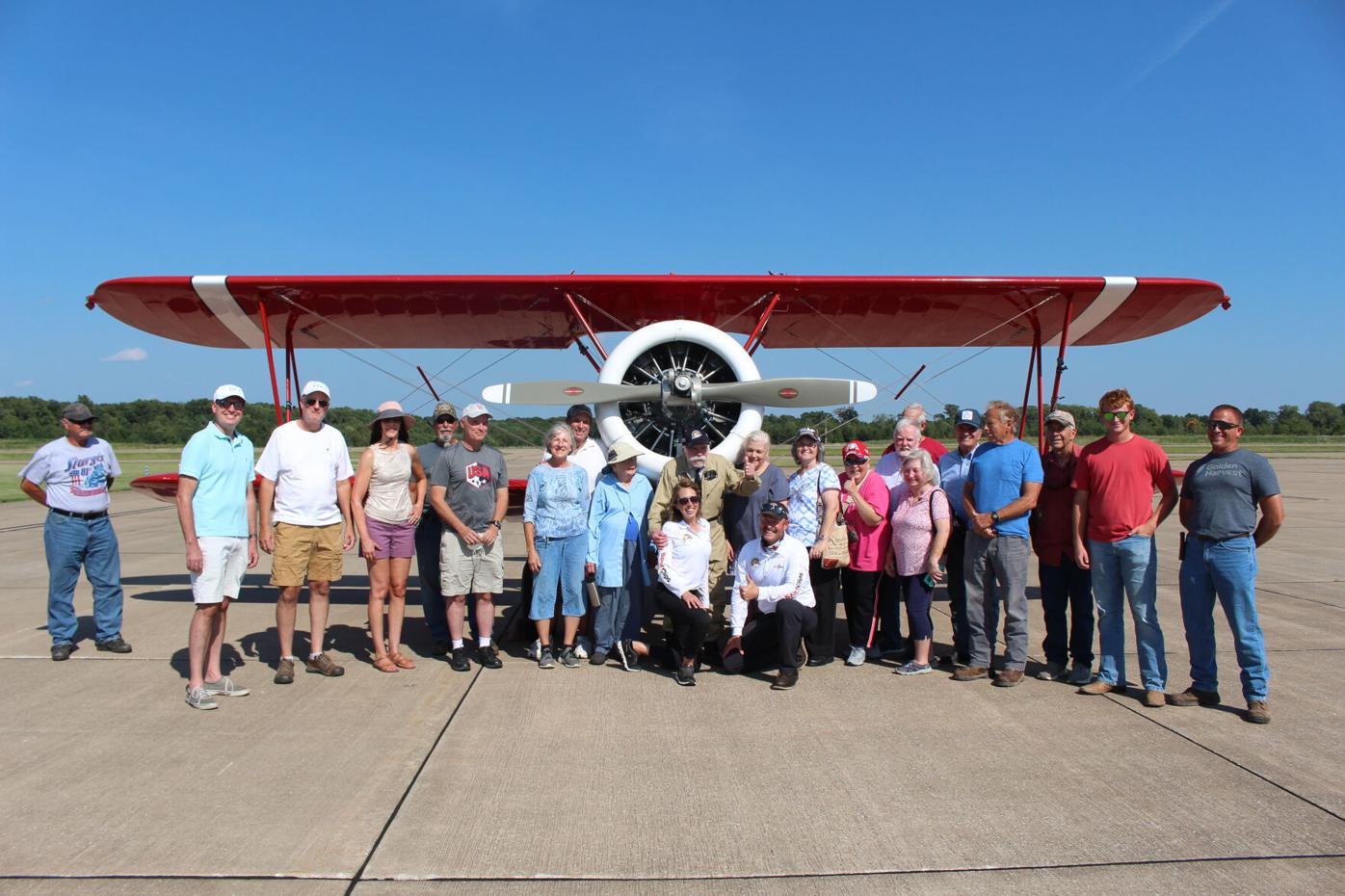 Family, friends and well-wishers celebrate with Len Moss, center, after he took his Dream Flight on Monday at Hannibal Regional Airport. At 104-years-old, pilot Clint Cawley said Moss is likely the oldest veteran who has taken a Dream Flight to date as he signed his name to the tail.

Family, friends and well-wishers celebrate with Len Moss, center, after he took his Dream Flight on Monday at Hannibal Regional Airport. At 104-years-old, pilot Clint Cawley said Moss is likely the oldest veteran who has taken a Dream Flight to date as he signed his name to the tail.

HANNIBAL — Hannibal’s Len Moss took to the skies once again on Monday for Dream Flights’ Operation September Freedom event, bringing back a rush of memories from his years as an aviator with the U.S. Navy.

Moss had his full aviation suit on and beamed as he climbed aboard the restored 1942 Boeing Stearman biplane that landed at Hannibal Regional Airport on Monday afternoon for his Dream Flight. He was assisted by pilots and husband-and-wife team Andrea and Clint Cawley as he boarded the front cockpit for Operation September Freedom, which uses a six-aircraft fleet of restored Boeing Stearmans to take World War II veterans on flights throughout the month of September.

Everything “all came together” after Len Moss’ son, Tom, visited with his friend, Don Scroggs, a member of the King’s Herald Quartet and friend of the president and founder of Dream Flights, Darryl Fisher. Tom Moss, Brian Moss and his wife, Kelly, were among the crowd celebrating Moss’ Dream Flight at Hannibal Regional Airport.

“They made a space for Pop,” Tom Moss said. “It’s like the old chess master upstairs is making everything work.”

As Tom and Brian Moss talked with their father, he shared recollections going back to school days — he was born on a farm not far from the airport. He also shared stories from his 30 years of service and about 11,000 hours of flying seaplanes, multi-engine airplanes and fighter craft. After the safety protocol, it was time for the big flight everyone had gathered to see.

“They’ve got their own sound. You can tell what it is by the engine noise,” Moss said as his father flew by.

Moss went from flying biplanes to P-51 Mustangs, receiving training in North Africa at the same time as the Tuskegee Airmen. He painted likenesses of service men’s wives and girlfriends for them on airplane fuselages during the war, and he creates unique artwork every day.

The planes are much more complicated today, but Moss pointed out the mortality rate was much higher during training — around 10 to 12% of trainees lost their lives. Moss was qualified to fly fighter planes, multi-engine aircraft and seaplanes after his training. He received a manual each time, and a great deal of learning was accomplished on the spot.

There were heart-wrenching moments as well. Moss lost his brother when he was flying a Corsair. He contracted typhus fever twice while the company was in a tunnel used for air raids in Naples, Italy. The squadron left him behind because they didn’t think he would survive, but a Corpsman brought him water and helped him recover from the disease.

Moss said his father talked about being in a scout plane, shot off a ramp powered by an artillery shell. After the flight, fellow service men would pick the plane up to return it to the catapult deck.

“When you’ve got 104 years, you’ve got a lot of history behind you,” Moss said about his father.

When he returned from the flight, the experience brought back a flood of memories for Moss. He told shared several stories with Clint Cawley after they touched down.

During World War II, Moss’ received a Distinguished Flying Cross for his valor displayed during reconnaissance and spotting flights in July 1943 during the invasion of the Island of Sicily. He flew deep into enemy territory, providing information which benefitted bombardment efforts. Moss was awarded a Gold Star in lieu of a second Distinguished Flying Cross for again providing invaluable information during reconnaissance flights in August 1944 in Southern France.

Moss told members of the crowd engine failures were common, and he had experienced three of his own.

“Fortunately, I was in a seaplane all three times that I had it,” he said, drawing laughs from several visitors.

After the landing, Moss added his signature to the tail, joining the growing number of service men and women taking their Dream Flight.

“To me it was wonderful. As I was telling Clint, the pilot, if I had come out and wanted to buy a ride, I’d expect to pay at least $25 or $50 for the same thing. “He did it for free, and I gave him an ‘up’ on it, too,” Moss said with a chuckle, referring to advancing Cawley to the next step in his aviation career.