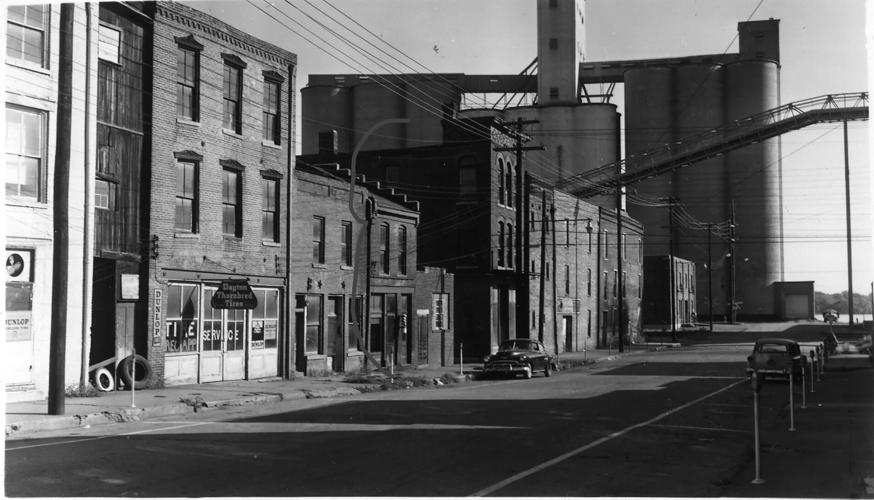 The three-story, dark brick building was constructed in in 1883, replacing an older building at the same site, both buildings owned by the Koch family. It was rumored that the older building’s walls might have contained gold, hidden by an early occupant, Martin Leister, circa 1867. The address of the three-story building, now razed, was 110 Bird Street, Hannibal, Mo. 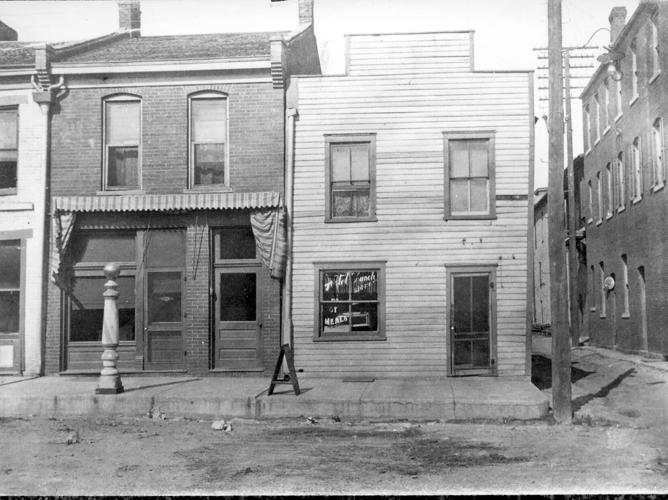 To the west of the the Koch building, located at 112 Bird Street, was the building where Sam Clemens’ father worked as a justice of the peace. This building was later moved to Hill Street, across the mall from the Mark Twain Boyhood home.

The three-story, dark brick building was constructed in in 1883, replacing an older building at the same site, both buildings owned by the Koch family. It was rumored that the older building’s walls might have contained gold, hidden by an early occupant, Martin Leister, circa 1867. The address of the three-story building, now razed, was 110 Bird Street, Hannibal, Mo.

To the west of the the Koch building, located at 112 Bird Street, was the building where Sam Clemens’ father worked as a justice of the peace. This building was later moved to Hill Street, across the mall from the Mark Twain Boyhood home.

Small town stories certainly have a way of taking on a life of their own.

Take for instance, a story which surfaced in 1883 when a building owned since 1867 by the Koch family, located on the north side of the 100 block of Bird Street, was in the process of demolition.

This story, originally published in the Hannibal Journal and subsequently republished by the Quincy Daily Whig on Nov. 14, 1883, led to speculation that there might be gold (a lot of it) hidden in the walls of the old building.

The demolition crew, as well as those who were watching the demolition process, were on high alert for possible gold tucked inside those old walls.

A nugget of truth for this story, if it even actually existed, went all the way back to the end of the Civil War, when William Martin Leister moved to town.

German born, Martin (as he went by) Leister came to Missouri from his wife’s native Kentucky, and received the plum political post of postmaster at Cincinnati, Mo. Now, for those who don’t know, Cincinnati is located in Ralls County, along the banks of the Salt River as it meanders through the land to the northeast of what is now Mark Twain Lake. Today, there is a boat ramp at the site, known as Hoot Owl Hollow. The tiny burb lies south of Route A, and west of Route H, in a township named Saline, for its rich salt deposits.

The salaried job of postmaster was short-lived, and Martin Leister turned his attention to farming. He registered 320 acres of Audrain County land with the land office at Palmyra on Oct. 30, 1857. He set out to tame the land and provide sustenance for his wife, their two daughters and their youngest, a son.

The daughters, Martha and Mary, each married at the turn of the decade, both choosing husbands prior to the war’s beginning. (Charles Grosse married Martha [Mattie] Leister and Stephen Decatur Ely [later a long-time mayor of Vandalia] married Mary Edwards Leister in 1860.)

In 1860, in Ralls County, at Cincinnati, Martin Leister conducted a business and provided a home for his wife, Elizabeth, 45, and their only son, James E. Leister, 15. In addition, there were four female slaves.

Confederate-leaning Martin Leister was considered too old to fight during the war, but that didn’t stop his involvement. He stood accused, according to Provost Marshall papers from 1862, (ancestry.com) of purchasing gun powder in Hannibal to be used by the Confederate forces. He reportedly borrowed $125 from Alfred Lamb to make the purchase. He then camouflaged his load by buying crocks, which he told onlookers he planned to sell at his store in Cincinnati. He later filled them with the powder for transport.

As a result, he was arrested by Lieut. S.G. Dains for disloyalty, and jailed.

On Feb. 2, 1863, a committee of Ralls County citizens, led by Provost Marshall Jeff A. Mayhall, deemed Leister to be a disloyal man.

During the war, Leister moved to Hannibal, where he opened a saloon on the north side of Bird, between Main and the Levee.

Leister’s wife, Elizabeth Edwards Leister, died in 1866, and was buried in the DeMoss Chapel cemetery at Hassard, Ralls County, Mo.

If there is any merit to the aforementioned newspaper story, which was written 20 years after the fact, it would be:

Interested parties searched for the gold at the time of Leister’s death, to no avail.

At the time of the demolition in 1883, the old building was owned by George J. Koch. His father and brothers had owned the property since 1867, the year Martin Leister died.

Just to the west, across the alley, was the building where Samuel Clemen’s father, Judge Clemens, had practiced his profession. (The building was later moved to Hill Street.)

Koch told the newspaper in 1883 that he was tearing down the building (at 110 Bird), and planned to replace it with a new, three-story business building, which then continued under Koch operation until he moved his business to 318 N. Main circa 1912.

Fred and Bessie Hoelscher, who had married circa 1908, purchased the building at 110 Bird St., and continued to do business at this address at least through 1937. In 1910, the Quincy Daily Herald identified Bessie Hoelscher as a bawdy house operator. During Prohibition the Hoelschers advertised the sale of soft drinks, rather than liquor, but in 1923 Bessie was arrested in Monroe County and served jail time for bootlegging. During this era the 100 block of Bird Street was known as the Red Light District.

George J. Koch died in 1941. At the time of his death, he lived at 2005 Broadway. His remains are buried at Mt. Olivet Cemetery.

Note: The encroaching river took a toll on the Bird Street buildings over the years, and today, all of the buildings on the north side of the 100 block of Bird Street have been razed.

Note: Some information for this story was obtained from the National Register of Historic Places inventory, Hannibal Central Business District, Esley Hamilton.

Mary Lou Montgomery, retired as editor of the Hannibal (Mo.) Courier-Post in 2014. She researches and writes narrative-style stories about the people who served as building blocks for this region’s foundation. Books available on Amazon.com by this author include but are not limited to: "The Notorious Madam Shaw," "Pioneers in Medicine from Northeast Missouri," and "The Historic Murphy House, Hannibal, Mo., Circa 1870." She can be reached at Montgomery.editor@yahoo.com Her collective works can be found at maryloumontgomery.com