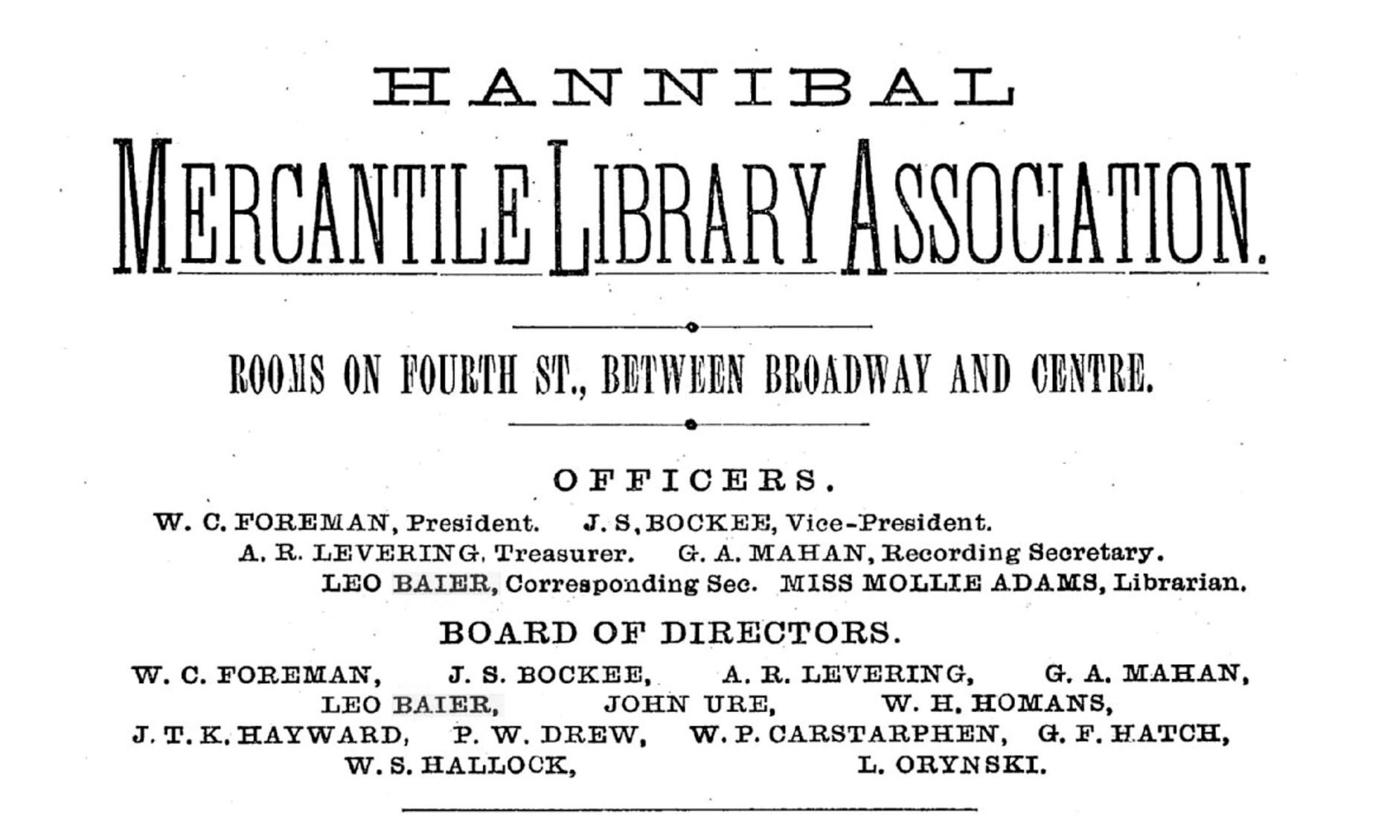 This advertisement in the 1877 Hannibal city directory indicates that Leo Baier was both an officer and a board member for the Hannibal Mercantile Library Association. 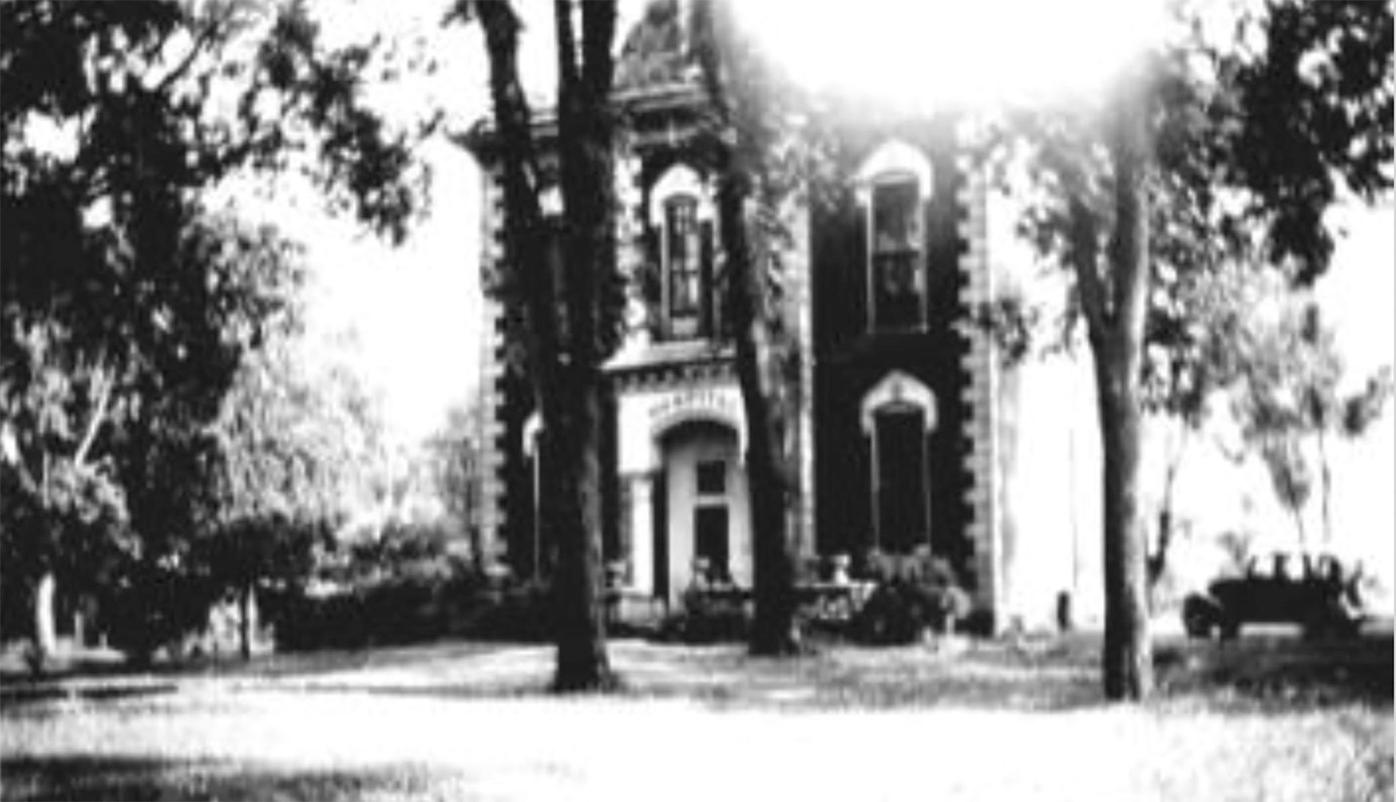 Rev. Leo Baier is credited with leadership in the establishment of the Shelbina Collegiate Institute, which was located at 303 W. College Street, Shelbina. The building was constructed in 1877, and Rev. Baier served as its president for two years. 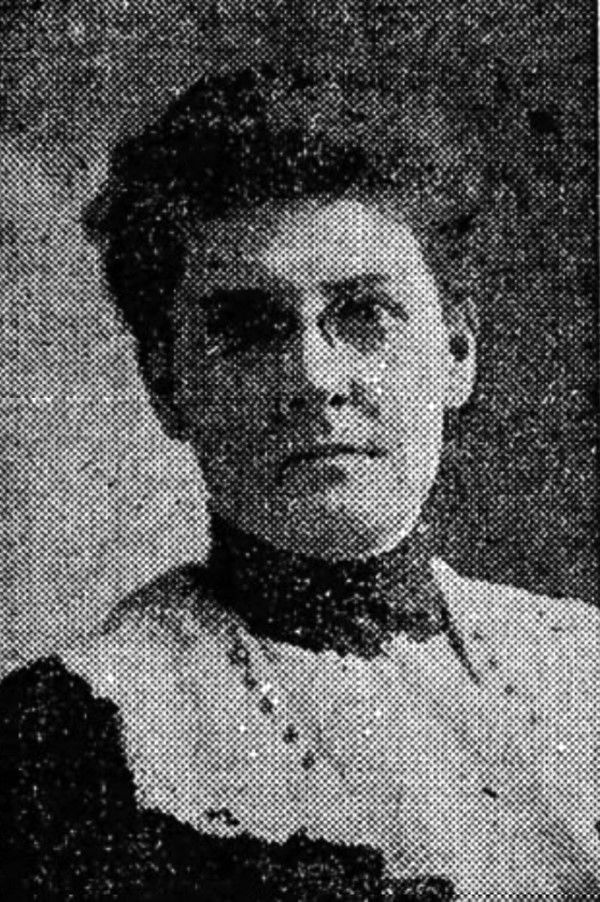 After his lingering illness and his subsequent death in 1887, Rev. Leo Baier’s second wife, Florence, enrolled in medical school and became a practicing physician in Minneapolis, Minn.

This advertisement in the 1877 Hannibal city directory indicates that Leo Baier was both an officer and a board member for the Hannibal Mercantile Library Association.

Rev. Leo Baier is credited with leadership in the establishment of the Shelbina Collegiate Institute, which was located at 303 W. College Street, Shelbina. The building was constructed in 1877, and Rev. Baier served as its president for two years.

After his lingering illness and his subsequent death in 1887, Rev. Leo Baier’s second wife, Florence, enrolled in medical school and became a practicing physician in Minneapolis, Minn.

Latin, German and Greek. All three languages were taught at Hannibal College in 1877, when the Rev. Leo Baier was at the helm.

In the late winter and spring of 1877, during the final semester of the college’s existence, 40 studied Latin, another 40 were enrolled in the German class, and six Hannibal College students studied Greek. The school was hosted inside a small frame building on the southeast corner of Church and Fifth streets, Hannibal, Mo., (which had served as a school in addition to the Second Presbyterian Church, off and on since the early 1850s.)

In addition to the languages, the college offered courses in trigonometry and geometry, a study of Caesar, and a study of Virgil.

The demise of the college, which had served the community for some nine years, was blamed by the Hannibal Clipper on “pecuniary difficulties and unfortunate circumstances.” The newspaper did not point blame at management.

“Prof. Baier is a gentleman of education, thought and research, and of untiring industry, and it is with regret that we contemplate the probability of his removal from this city.”

A professed self-made man, Leo Baier was a master of foreign languages, a captivate of astrology, a trained Presbyterian minister and a devoted educator. During the early-to-mid 1870s, he brought a new level of educational opportunity to students in Hannibal, Mo., under the auspices of Hannibal College, which offered courses previously attainable only at far-off colleges and universities.

Born in Baden, Germany, and the son of a stone-cutter, he came of age in Glasgow, Mo., so poor that few educational opportunities were available to him. His father was unable to contribute to his educational pursuits, so Leo Baier used his own resourcefulness in order to advance his learning.

Ironically, Leo Baier’s innate curiosity and self-determination would lead him to a lifetime of educating others. A look back at biographical information available on Leo Baier indicates that he graduated from Presbyterian-sponsored Westminster College in 1866. During his educational progression, he served as sexton of the Presbyterian Church at Glasgow, using the stipend for the purchase of books. Church members arranged for him to take a theological course at Princeton, where he earned money by tutoring in his native language. Following, he occupied the pulpit in his home church at Glasgow for a time, and taught for a year at Lindenwood College for women in St. Charles.

He took as his wife, Miss Mary (Mollie) Augusta Smith, originally of Carroll County, N.H., in June 1869. They were married at Chariton, Mo.

One year later, in June 1870, the Quincy Whig newspaper identified Baier as pastor of Hannibal’s Second Presbyterian Church, which was located on the southeast corner of Church and South Fifth streets in Hannibal, Mo.

By 1871, he was president of the institution chartered as Hannibal College, then in its third year of existence. The college staff took pride in admitting both women and men, unusual for colleges of that era.

In 1871, Robert F. Lakenan served as president of the college board, and John L. Robards served as the board secretary. Both were prominent Hannibal attorneys.

In 1873, the college was operating on the north side of Bird Street, between Ninth and Tenth.

In 1875, after the closing of Hannibal’s Second Presbyterian Church (of which Baier was pastor), the building on the southeast corner of Fifth and Church streets would house Hannibal College.

In its new location, the college opened a primary school in conjunction with the college. Teacher was Miss Virginia McFarland, who would soon marry Hannibal educator Job G. McVeigh. Baier performed the ceremony.

As already mentioned, the college would continue in operation until mid May 1877.

Known students from 1875-1877, as culled from Hannibal Clipper newspaper articles include:

Two children who survived into adulthood were born to the Baiers during their residency in Hannibal, Ethelbert, a son, in 1871, and Frances Ernestine Baier, daughter, born circa 1876. During their time in Hannibal, they lived at 103 N. Ninth St., and on Center street, near Maple Avenue.

The ministry and educational pursuits took the family to Shelby County, Mo., where Baier is credited for the launch of the Shelbina Collegiate Institute, and then on to Little Rock, Ark., where he was affiliated with the St. John’s College and the ministry.

Upon his arrival in Little Rock, he was introduced by the Daily Arkansas Gazette as: “Professor of ancient languages, German and Higher Mathematics. Also, lecturer on astronomy and chemistry.”

His health deteriorating even though he was still in his 30s, Baier moved with his wife and children to Minneapolis in 1881. Circa 1883, Rev. Baier’s third child (who would survive into adulthood) was born, Mary Agnes Baier.

Mrs. Baier died April 18, 1883, of pulmonary consumption, leaving her husband with an infant and two school-age children to care for.

He married Florence C. Nichols, a school teacher of Elkhart, Ind., in November 1883. A daughter was born to this marriage, Florence Jeannette Baier.

The cause of death was listed as osteomyelitis, or an infection in the bone.

His widow, who was 10 years his junior, went on to attend the College of Physicians and Surgeons of Hamline University, St. Paul, Minn., graduating in 1897. She later served an internship at the state hospital for the insane in Jamestown, N.D.a. She returned to Minneapolis, where she practiced medicine.

Dr. Florence C. Baier died in October 1925, and is buried in Batavia, Ill.

The Christian Church would later conduct services in the building on the southeast corner of Fifth and Church streets, as noted by the Sanborn fire prevention maps of 1885 and 1890. Before the turn of the century, the building was torn down and replaced by the Hannibal Free Public Library, which still utilizes this site at 200 S. Fifth.

Hannibal College was launched circa 1868, and closed at the end of the school term, in May 1877.

In December 1875, Baier told the Hannibal Clipper that “co-education has been adopted by 31 colleges in the United States. The two largest mixed colleges in the country are Oberlin in Ohio, and Michigan University.”

Margaret Ann Duncan and Sarah Patterson Benton taught in the building on the southeast corner of Fifth and Church streets during the winter of 1850. The school was run by the Rev. F.B. McElroy, an “Old School Presbyterian.” Margaret married Bryson Stillwell, and Sarah married Tilden Selmes. Source: The Notorious Madam Shaw.

Mary Lou Montgomery, retired as editor of the Hannibal (Mo.) Courier-Post in 2014. She researches and writes narrative-style stories about the people who served as building blocks for this region’s foundation. Books available on Amazon.com by this author: “The Notorious Madam Shaw,” “Pioneers in Medicine from Northeast Missouri,” and “The Historic Murphy House, Hannibal, Mo., Circa 1870.” She can be reached at Montgomery.editor@yahoo.com Her collective works can be found at www.maryloumontgomery.com. Translations via translate.yandex.com.