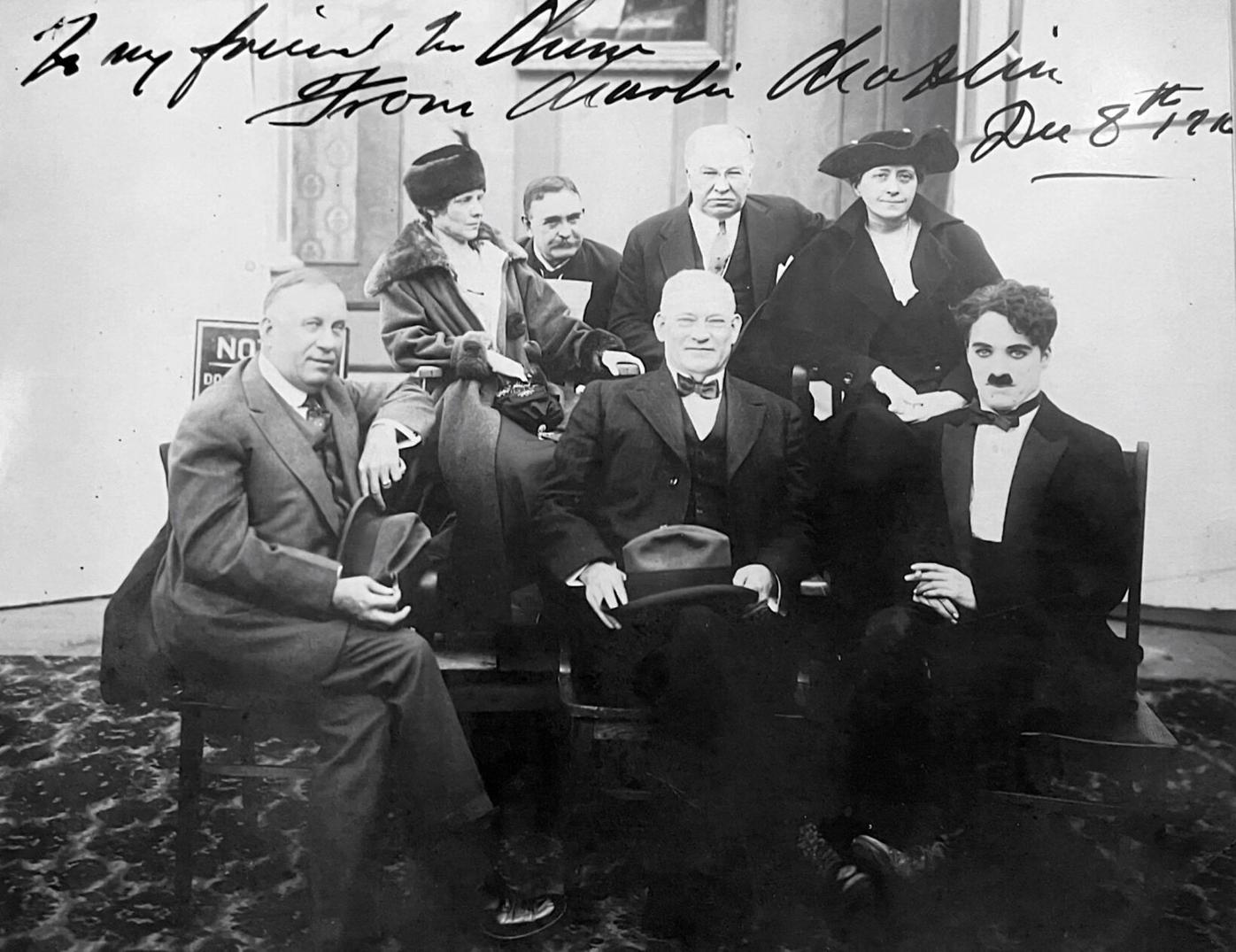 William H. Clune, seated front row center, was close friends and poker buddies with Charlie Chaplin, pictured front row at right. James Clune Ciccolo of Pasadena, Calif., shared a copy of this photo, signed by Chaplin, with his relative, Jim O’Hern of St. Augustine, Fla., who shared it for inclusion with this story. 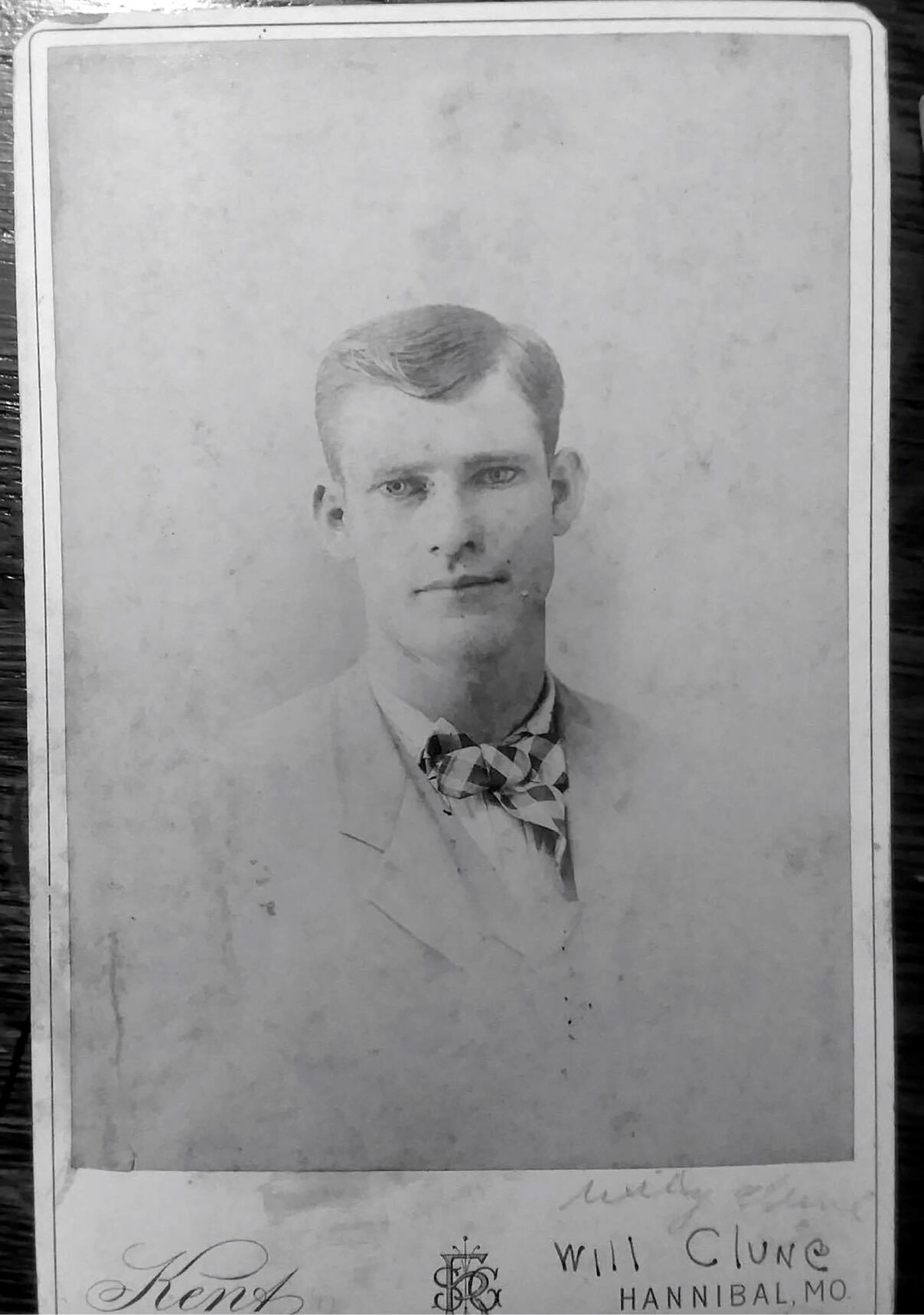 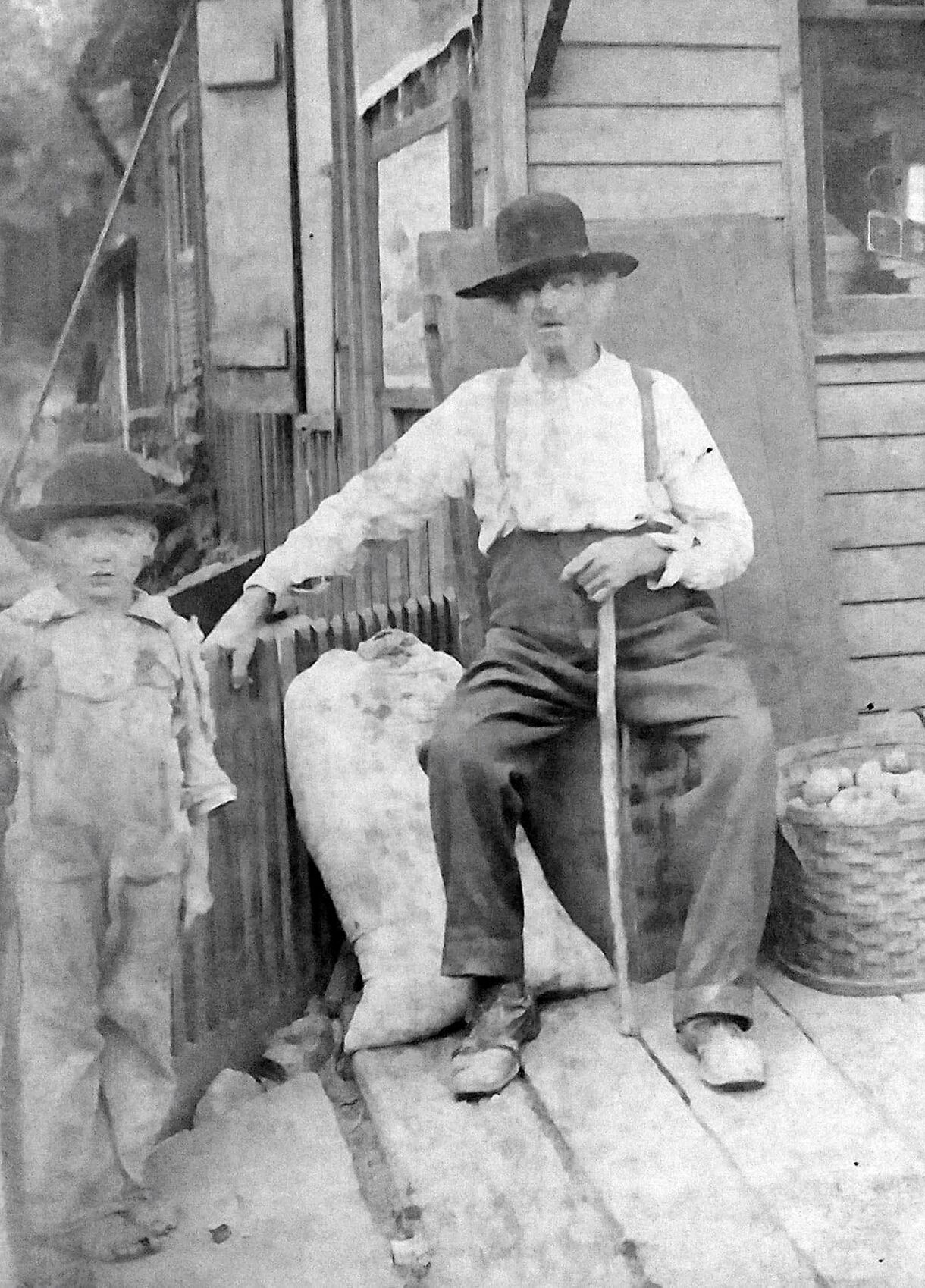 Michael Clune is pictured around the turn of the century on what might be the front porch of the family’s grocery store. The store was located at 379 Palmyra Avenue; the family living at 375 Palmyra Avenue. By 1914, the street was renamed and the property renumbered. The address of the Clune house became 509 Mark Twain Avenue. The Denkler grocery store, previously next door to the west of the Clune store, was at 515 Mark Twain Avenue.

His Irish-born father, Michael, plied his trade as a stone mason, and, according to family lore, contributed to the construction (and might have been contractor for) both the Marion County Jail at Palmyra and the Park Hotel at Fourth and Center in Hannibal.

Born in the tumultuous pre-war year of 1863, Willy was an observant child — watching those in his environment and learning the ways of the world through their steps and missteps.

During his boyhood, the busy avenue (subject to flash flooding) consisted of graded dirt, which was muddy during spring thaw and dusty during summer drought. It was lined with tenement houses, catering to the poor, and small shops serving those residents’ specific needs.

In 1881, when he was just 18, Willy — later to be known in business circles as William H. Clune — opened a store near his parents’ home, located on the south side of the avenue, selling groceries and provisions to his neighbors.

That grocery, located in a single-story, north-facing frame building in Out Lot 88, was operated by Billy’s father and mother, Michael and Bridget O’Hern Clune, and later by Willy’s, brother, John T. Clune. The store would continue to support the Clune family for nearly three decades. But Willy would soon move on to more lucrative ventures.

He was lured beyond the city’s limits by the call of steam railroads which criss-crossed Hannibal from north to south, as well as east to west.

Out west, he knew, was a world quite different from the small-town climate of his boyhood home.

So on the rails he went, at first a railroad worker, and later as an entrepreneur in a world that was a perfect fit for his dreams. Los Angeles was his final destination, where he settled in 1887.

William H. Clune rose to prominence quickly in California, making shrewd real estate deals, investing in talent, and taking advantage of opportunities as they presented themselves.

Just as Willy Clune was observant of his early environment, so was Helen Hunt Jackson (1830-1885). Today heralded as a legendary poet and non-fiction writer, during her day she was considered a champion for her role in publicizing the American government’s mistreatment of Native Americans in Southern California following the Mexican-American War. She penned a novel on the subject — "Ramona" — which was so popular with readers that they were drawn to visit Southern California in order to see the landmarks which served as the book’s setting.

While Mrs. Jackson didn’t live to see the commercial success of Ramona, the book’s legacy lives on, thanks in large part to the ingenuity of William H. Clune.

By 1916, William H. Clune was a leading Hollywood film producer, and set in motion a movie based upon Mrs. Jackson’s novel Ramona, to be released to the theaters across the country.

The Quincy Daily Journal published a review of the movie’s premier at the Hippodrome, located at Eighth and Maine in Quincy, Ill.

“The photography is unexcelled, showing much of the natural beauty of Southern California and with the numerous characters in the story faithfully portrayed, and the wonderfully appealing music by a special orchestra, augmented by local musicians. Ramona made a deep impression on those who saw it.”

The silent movie was to play throughout the week, including matinees on Saturday and Sunday.

“… it would be well to have seats laid aside, as there no doubt will be a big demand the remainder of the engagement.”

In the motion-picture world, his vision was credited with the development of the multi-reel picture that advanced the industry from the two-reel class to the production of noteworthy productions such as “The Birth of a Nation” and “Ramona.”

Purchasing a studio from Mary Pickford allowed for the filming of “Ramona” and “Eyes of the World.” (Source: LA Times, Oct. 19, 1927)

Willy came back to Hannibal from time to time, keeping in touch with friends in both Hannibal and Quincy, Ill.

His father died in 1905, at the age of 100. His brother, John T. Clune, died in March 1915, followed by his mother’s death (Bridget O’Hern Clune) in September 1915. His youngest sister, Mary Ann Clune, continued to live in Hannibal, moving from Mark Twain Avenue to 200 Virginia St., prior to 1930, where she lived until her death in 1964. (She had a fish pond in her back yard, which is fondly remembered by neighbors and family alike.)

One of the Hannibal friends Clune kept in touch with was Thomas O’Donnell, who with his brother Robert operated O’Donnell’s Funeral Home at Lyon and South Fifth streets in Hannibal until 1925.

Clune wrote to O’Donnell (a letter which O’Donnell shared with the Quincy Daily Whig in January 1920) that he was expending $50,000 on improvements to his Broadway theater in Los Angeles.

The O’Donnell brothers moved to Los Angeles in 1925, and in 1927, conducted funeral services for their fellow Hannibal native, William H. Clune, at the O’Donnell Sunset Mortuary.

Willy’s cousin, Margaret Clune, was 13 years old in 1875, and a student at St. Joseph’s Academy on Broadway, when she was shot in the head by a fellow student, and subsequently died. She was the daughter of James Clune, Michael Clune’s brother. Her family lived near the intersection of Third Street and Palmyra Avenue. Margaret and Willy were about the same age.

Link to the Margaret Clune story: