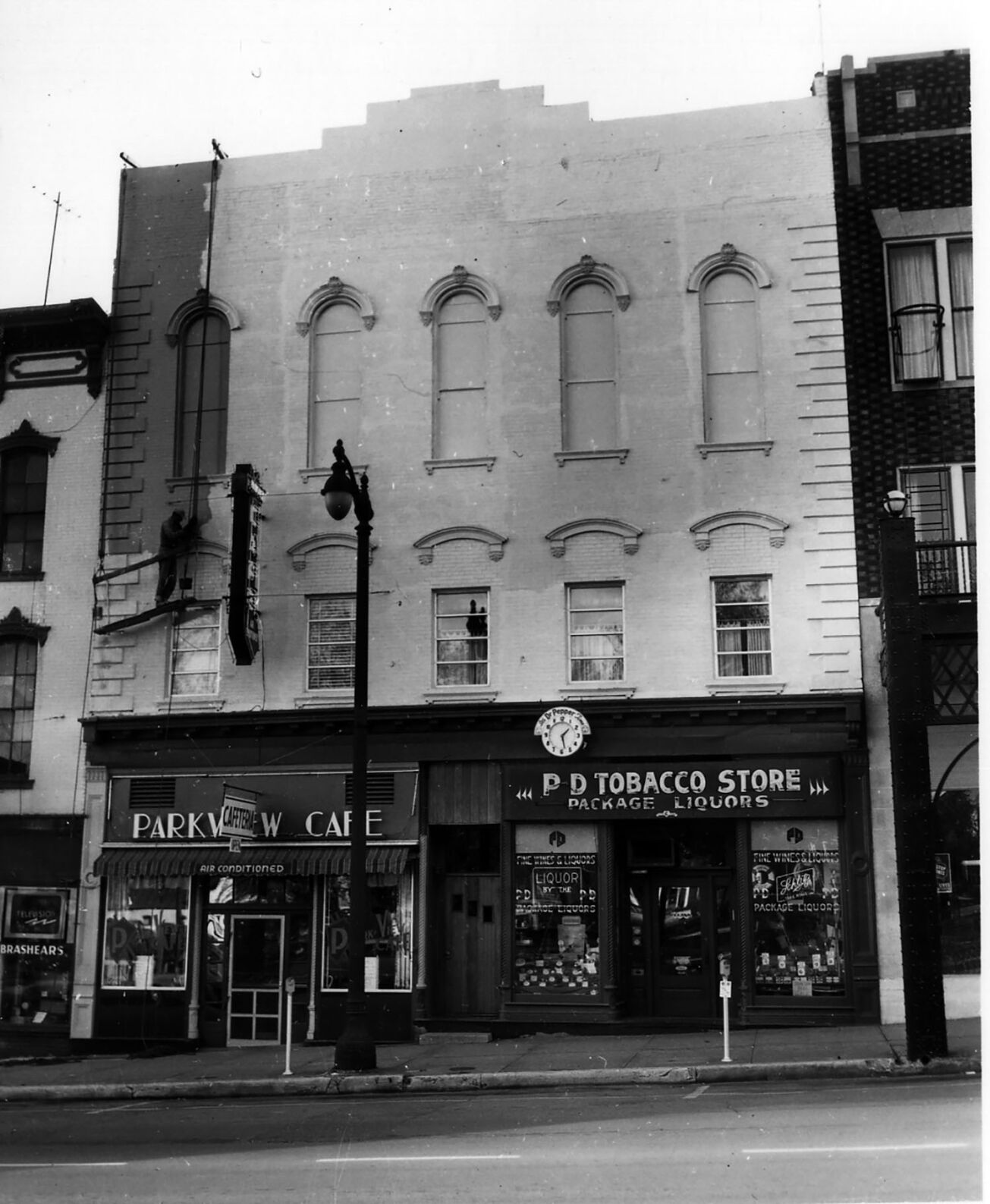 This historic double building was constructed circa 1871. The third-floor contained the entertainment venue known as Mozart Hall. During the mid to late 1870s, Leonard Orynski operated a drug store in the building at left, 407 Broadway. One young man who trained under Mr. Orynski, Francis Edwin Van Haren, went on to spend his lifetime in the drug industry. One of his inventions was a fly escape, which allowed flies to leave through a window screen, but not return. 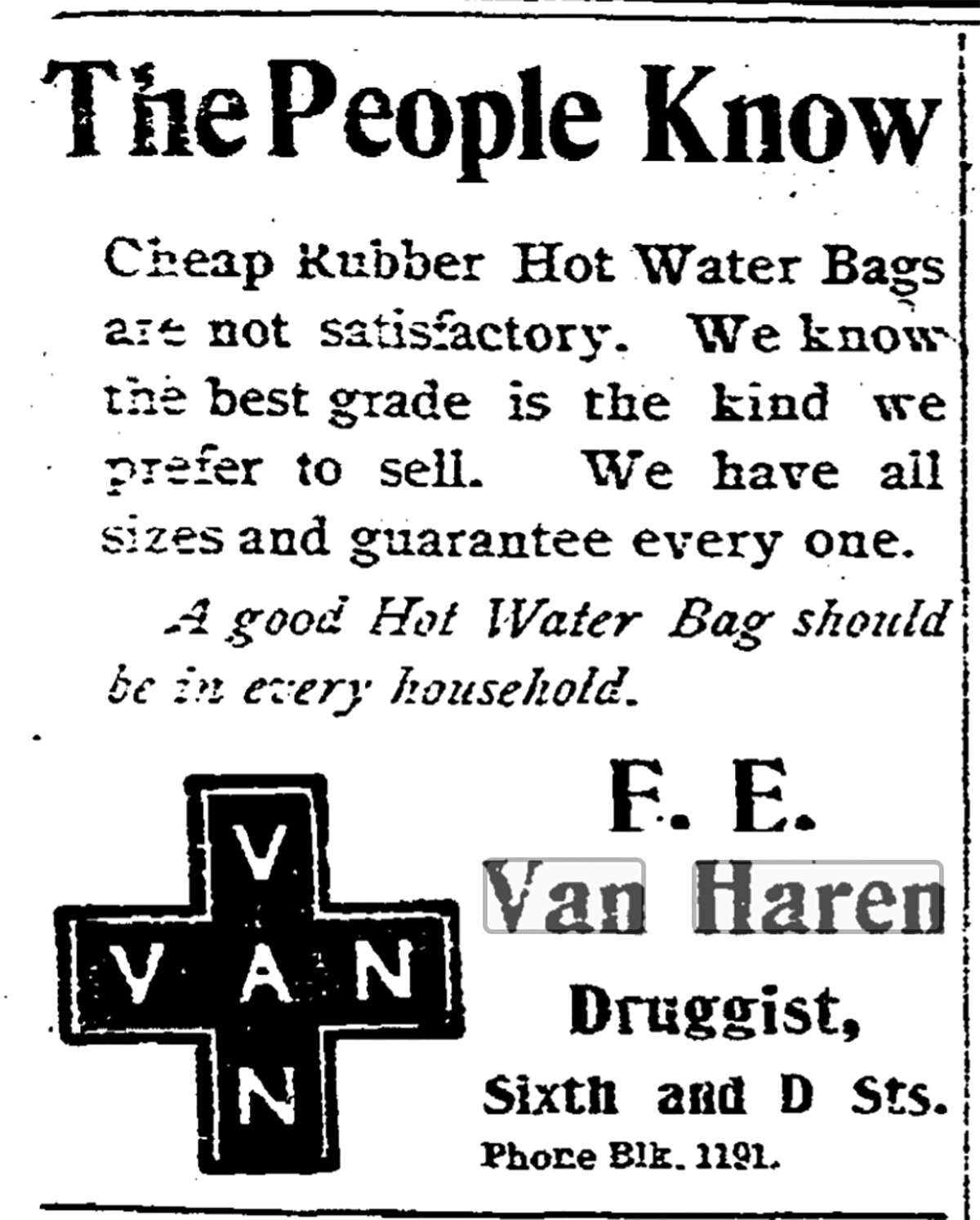 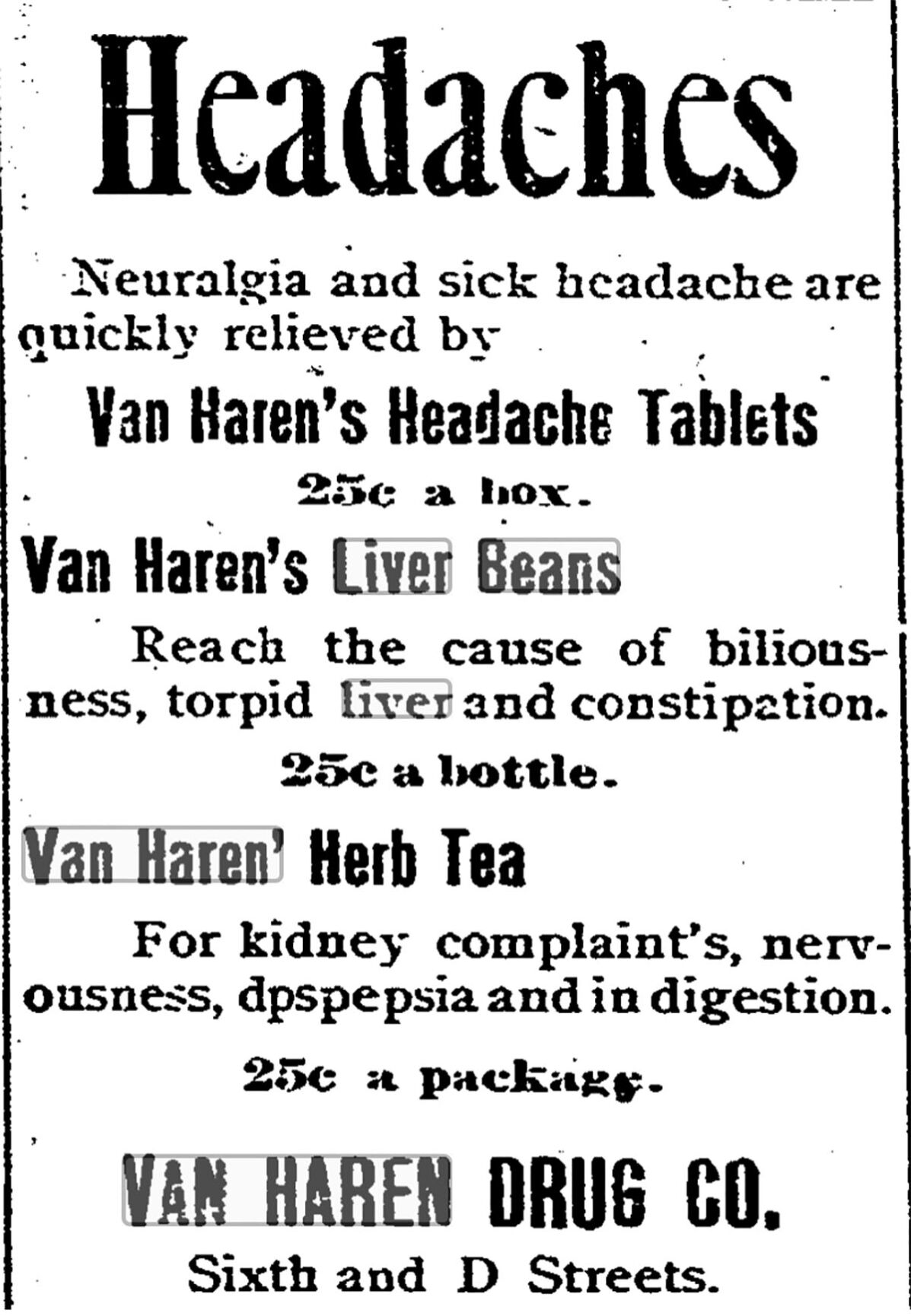 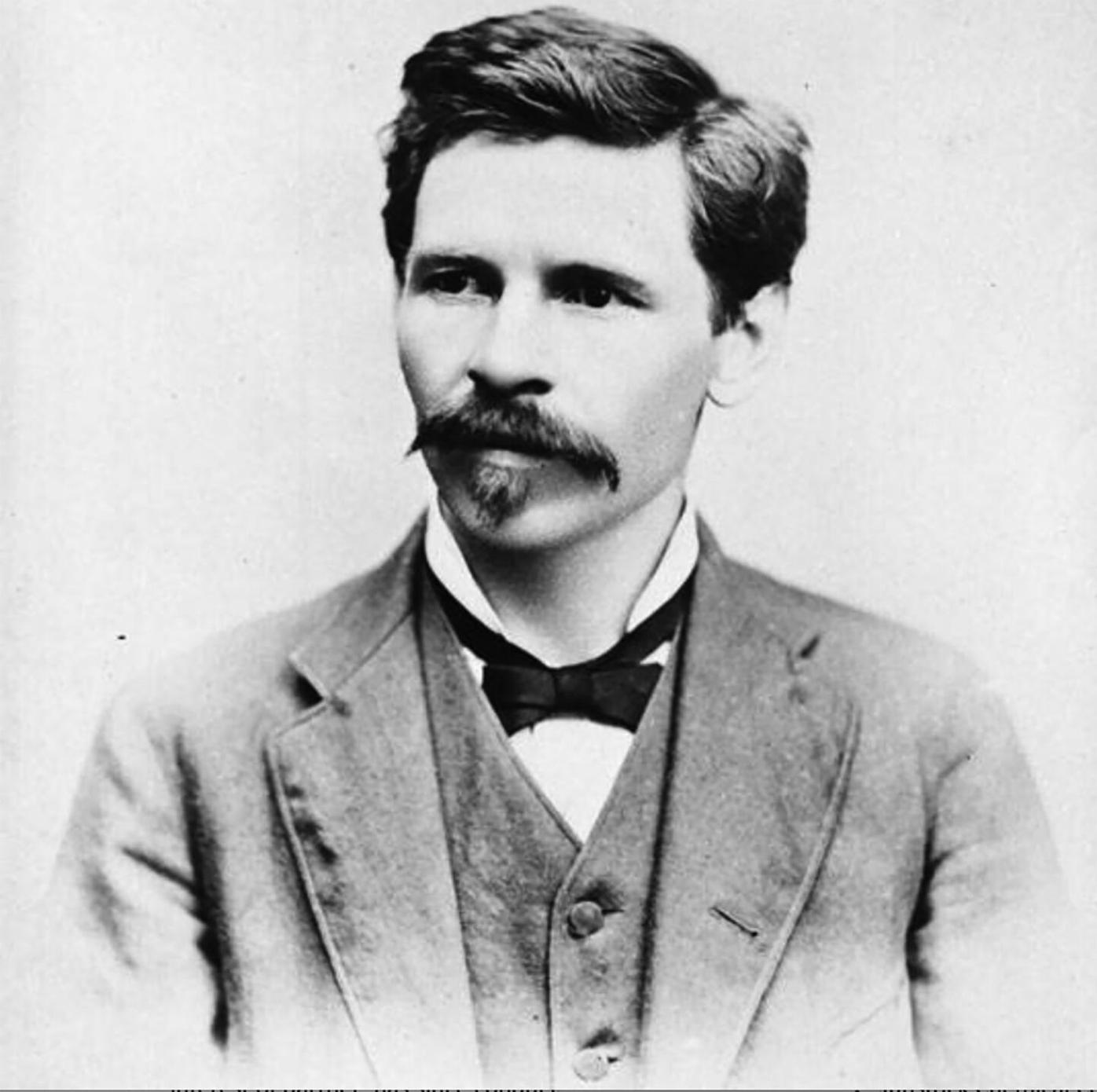 Leonard Orynski, from Poland, operated a drug store at 407 Broadway, Hannibal, Mo., during the 1870s. One of the young apprentices who studied the trade under Leonard Orynski was Francis Edwin Van Haren.

This historic double building was constructed circa 1871. The third-floor contained the entertainment venue known as Mozart Hall. During the mid to late 1870s, Leonard Orynski operated a drug store in the building at left, 407 Broadway. One young man who trained under Mr. Orynski, Francis Edwin Van Haren, went on to spend his lifetime in the drug industry. One of his inventions was a fly escape, which allowed flies to leave through a window screen, but not return.

What if a fly could escape via a window screen, without being able to get back inside?

That was a question pondered in 1889 by Francis Edwin Van Haren, who spent his formative years in Hannibal, Mo. While living in San Diego, he came up with the concept of a screen enhancement, he called the fly escape, which he believed could revolutionize the screen industry.

A San Diego newspaper published an account of the fly escape:

“The patent consists of a wire woven cone about three-quarters of an inch deep and about the shape of a decanter at the base. This is fastened over a circular-cut hole in a window screen, into which Mr. Fly, from his inquisitive disposition, is sure to enter. In the apex of the cone is a small hole just large enough to allow the fly to make his exit but once out he cannot find his way back by the same route. These little cones are placed one to every square foot of window screen.”

The devices were tested in the “Hotel del Coronado” in San Diego, to great fanfare. At the time of the story, mass production of the fly escape was about to get underway.

While a youth in Hannibal, F.E. Van Haren received on-the-job training under the tutelage of Leonardo Orynski, a Polish immigrant, who moved to Hannibal, Mo., circa 1870.

Mr. Orynski established a drug store on the southwest corner of Broadway and Fourth streets, and later at 407 Broadway. During the 1870s he mentored at least three young Hannibal men in the pharmacy trade, including16-year-old Francis E. Van Haren, who was working as a clerk at Orynski’s drug store in 1875.

At the time, Van Haren lived with his step father and mother, William and Almeadia Cairns Lines, and his siblings and half-siblings, on the east side of Sixth Street, south of Church, in Hannibal.

Not long after Mr. Orynski sold out of his business circa 1880, in order to move to San Antonio, Texas, Francis Van Haren left town as well. He moved to Topeka, Kansas, where his father and step mother, Frances E. and Jessie Van Haren, lived, and he went to work for A.J. Arnold, long-time North Topeka druggist.

In November 1881, Van Haren, described by a local newspaper as a “handsome North Side druggist,” purchased the “Blue Front” drug store of Dr. Burgen*, and soon went into business for himself. He established the F.E. Van Haren’s drug store “north of the railroad” at 430 Kansas Ave., North Topeka. In that store he sold Dr. White’s dandelion, “the only liver medicine in the market that is sold under a positive guarantee. Try one bottle, and you will not do without it.”

Possessed with ingenuity and big dreams, Van Haren, still a bachelor, once again prepared to move, this time to sunny climate of Southern California. Within a year he would establish a partnership with C.D. Knox in a drug store at 1120 Fourth St., San Diego.

In addition, he took a bride in 1887, the musically talented 19-year-old Lucy Lowe Wortham, eight years his junior.

As Van Haren was establishing himself in the drug business in San Diego, and as a family man, his focus once again turned to the midwest. His father died in mid April 1886 in Topeka, and his mother, Almeda E. Lines, died in October 1890 in Hannibal. She is buried at Hannibal’s Mt. Olivet Cemetery.

By 1893, the Knox and Van Haren pharmacy was well established in San Diego’s Gaslight Quarter, on the southwest corner of Sixth and “D” streets. In 1898 Van Haren bought out his business partner. In 1902, he sold the business to Dr. E.R. Layne, and made plans to move his family to San Francisco, where he would enter the drug manufacturing business at 43 Stevenson Street.

A contentious divorce, generating unflattering newspaper reports, followed, and the fight between the Van Harens continued publicly from 1908 until 1911. Mr. Van Haren blamed his wife’s club activity for the demise of their marriage. She cited his propensity to throw dishes when angered.

By May 1911, the Van Haren Drug Company was located at 507 Mission Street in San Francisco, and his ex-wife and children had relocated to Berkeley, Calif. The couple later reconciled, and he lived out his life in Los Angeles. He died in July 1918 and was interred in Mt. Hope Cemetery, San Diego. His wife died in 1949.

A key product sold by the drug company was Van Haren’s Liver Beans, for the relief of constipation, torpid liver, headache and all sluggish conditions. It was sold at pharmacies in California, Nevada and Oregon, and by mail order. The all-vegetable product sold for 25 cents, or 5 for $1. Mr. Van Haren held a patent on this product.

The two other young men who clerked under Leonardo Orynski during the 1870s were:

David J. Hofbauer, who with his brother, L. August Hofbauer, purchased a drug store owned by Albert Russ in 1884.

The stories of these young men can be found in “Pioneers in Medicine from Northeast Missouri,” available at amazon.com

Note: the “Hotel del Coronado” where F.E. Van Haren’s fly escape was tested was constructed in 1888, and remains in business today as an iconic beach resort.