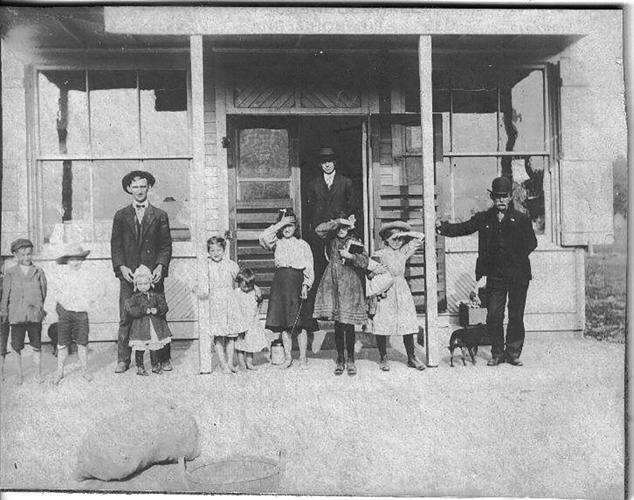 Pete Hall, at left, stands with his young daughter, Geraldine Hall, circa 1908. The man in the doorway is William Hall, and the man in the hat at right is Wm. H. (Harry) Gosnell. The children, besides Geraldine, are from the neighborhood. Family members were told that Annie Hall Gosnell was standing behind the door, because she didn’t want her photo taken. 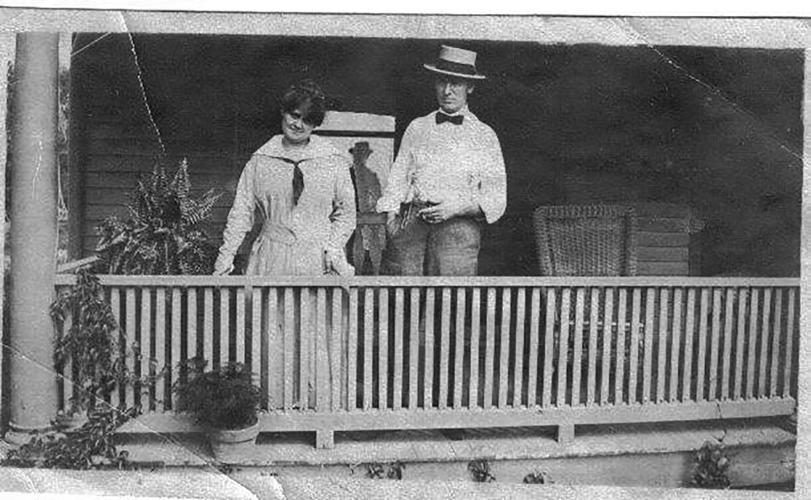 Laura and William Hall are pictured in front of their family’s grocery store on Lindell Avenue. 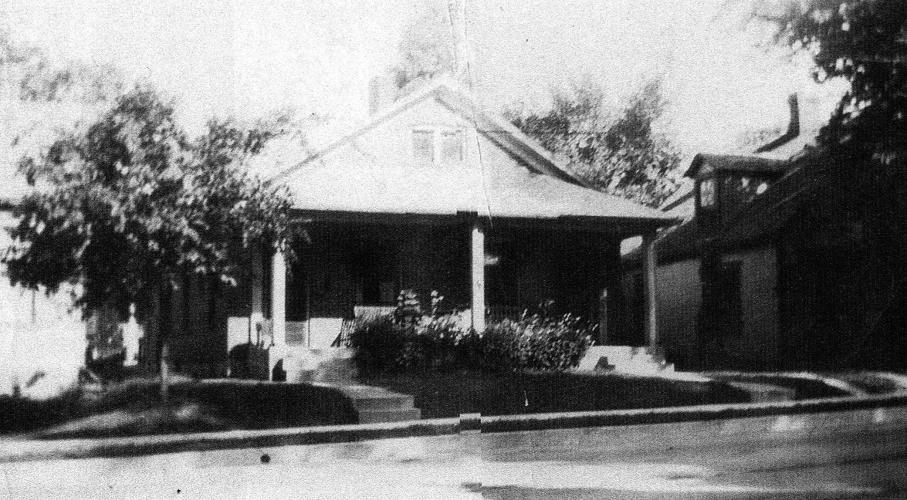 This is an undated photo of the duplex located at 2334 Market. The dwelling was later transitioned into a single-family house. Annie Hall Gosnell first purchased this house circa 1920, and today, the house remains in the family. It serves as home to Sue Williamson, Annie’s great-great granddaughter, and Sue’s husband, Perry. 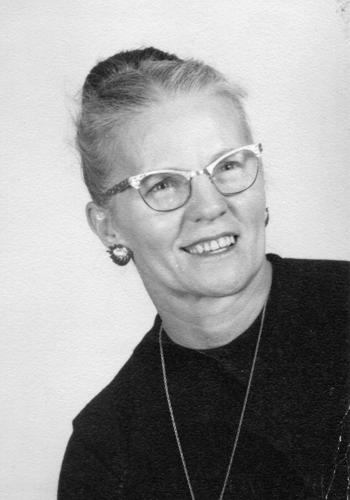 For most of her life, Rosemary Bousman lived in the houses that her grandmother, Annie Hall Gosnell, purchased in 1920. Sue Williamson, Rosemary’s granddaughter, and Sue’s husband, Perry, now own and live in the same house, 2334 Market Street. Rosemary worked at the Hannibal Free Public Library from 1963 to 1990.

Pete Hall, at left, stands with his young daughter, Geraldine Hall, circa 1908. The man in the doorway is William Hall, and the man in the hat at right is Wm. H. (Harry) Gosnell. The children, besides Geraldine, are from the neighborhood. Family members were told that Annie Hall Gosnell was standing behind the door, because she didn’t want her photo taken.

Laura and William Hall are pictured in front of their family’s grocery store on Lindell Avenue.

This is an undated photo of the duplex located at 2334 Market. The dwelling was later transitioned into a single-family house. Annie Hall Gosnell first purchased this house circa 1920, and today, the house remains in the family. It serves as home to Sue Williamson, Annie’s great-great granddaughter, and Sue’s husband, Perry.

Much of the Hannibal’s original Lindell Avenue, which ventures roughly southwest from Market Street, was lost during the construction of Warren Barrett Drive.

But enough of the two-lane pavement remains to serve as a solid reminder that a proud neighborhood has long existed here in the valley carved by Bear Creek, and in the associated lowlands through which many freight and passenger trains have traveled.

For two decades — the first of the 20th century — a grocery store stood on this street, tucked between the small frame houses south of Bear Creek and facing Lindell Avenue. This store served not only as a neighborhood convenience for those living on the south side of the creek and across the tracks from Hannibal proper, but it also served as a source of income for Annie E. Hall Gosnell, and her extended family.

By selling potatoes and canned goods, feed and seed, fresh vegetables and fruit, this family found financial stability during the years leading up to World War I.

The path to store ownership wasn’t easy for Annie, (circa 1850-1929) who came to the United States from England circa 1869 with Alfred Hall. Annie’s descendants have a copy of the land deed that she and Alfred signed in 1869, purchasing property near Scott’s Lane in Ralls County. Daughter Nellie, who died in infancy, was born the same year they purchased the property.

Alfred Hall, a teamster, left for St. Louis with some horses, and Annie never again learned of his fate or whereabouts.

During the early 1880s, scattered amongst the lumber yards in the Bear Creek valley, existed a few frame houses located upon streets which names are barely recognizable today: Russell. Miller. Samuel. Each was located in Wells Addition, platted in 1859.

Mary C. Bridwell Snider, a 45-year-old widow with three children, operated a boarding house in this area in 1880. The neighborhood was just south of the Hannibal Lumber yards, operated by A.W. Pettibone, and was wedged between the railroad tracks and Bear Creek’s ever unpredictable flow.

At the same time, Annie Hall and her three young sons, Fred, Willie and Alfred, (daughter Nellie died circa 1869) lived in Mrs. Snider’s house. Mrs. Hall worked as a servant, cleaning and cooking for the boarders, who included - at the time of the 1880 census - Jefry (stet) Redden, born 1852; James Russell, railroad engineer, born 1851 in Kentucky; Julia Russell, born 1862; William Buzzell, 30, a railroad engineer; M. Myers, 28, a laborer; and James Wolf, 24, a railroad employee.

It was likely in that house on Sunday, morning, Oct. 7, 1883, that Annie E. Hall, looking through a window, witnessed a horrendous sight: the fatal fall of her 12-year-old son, Freddie, from a moving train.

Immense grief. Heartache. But regardless of the pain felt by this mourning mother, time moved forward. She couldn’t look back; she still had two young sons to raise.

A bright financial spot on the horizon came a year or so later, in the form of William H. (Harry) Gosnell, a 55-year-old Civil War veteran. He courted Mrs. Hall, and the two were married in April 1884.

Roughly 16 years later, after the loss of an infant son, James, and the birth one daughter (Mary Elizabeth Gosnell, born 1888) Harry and Annie opened a grocery store together at 325 Lindell circa 1900. The building was one lot shy of the intersection of Lindell and Paige. Today, the address is 1312 Lindell.

That marriage failed circa 1908, and Annie’s by-then grown sons, Alfred (Pete) and William Hall, in turn partnered with their mother in the business. The store was originally located at 325 (1312) Lindell, and later moved to what is now known as 1220 Lindell.

The year 1908 was a monumental one for Annie Gosnell and her family.

Not only was she divorced that year, but she also lost a son: Alfred (Pete) Hall, 22, who died of tuberculosis at Boulder, Colo., in August 1908. He left behind his widow, Cammie Balthrope, and a young daughter, Geraldine. At that time, Pete’s brother, William, purchased family plots at Mount Olivet Cemetery, where Pete was buried.

Also in 1908, Annie Gosnell’s daughter, Mary, was married to Edwin O. Bridges, a railroad telegrapher. Together they had three children, Tomena, William Otto and Rosemary Bridges.

Tragically, Mary Gosnell Bridges died of tuberculosis in 1918 in Albuquerque, N.M., at the age of 30.

Around the time that the first world war ended, Daniel and Etta McVay took over operation of the grocery store that the Gosnell/Hall family had long operated. William Hall worked as a railroad conductor, and he and his wife, Laura, moved with Annie to 1901 Broadway, on the southwest corner of Broadway and South Arch. For a time, Edwin Bridges and his children lived there, as well.

In January 1920, William, in his early 40s, died of a heart attack. He had taken his wife for treatment at the Mayo Clinic, and was stricken while in Minnesota. He was buried at Mount Olivet Cemetery with his brother, Pete, and sister Mary.

Annie Hall Gosnell died in 1929, and is buried at Mount Olivet Cemetery.

Annie’s granddaughter, Rosemary, and her family moved to one side of the Willow Street duplex to help care for Aunt Laura. Rosemary and her husband William Francis Bousman, had three daughters, Laura Sue, who married Willis Williams, Judy, who married Thurman Munger, and Mary Louise, who married Bruce Battle.

Rosemary lived most of her life in these two houses, until her death on Nov. 29, 2002. Annie left the houses to Rosemary and her siblings, as her way of making sure the siblings always had some sort of income.

Rosemary’s granddaughter, Sue Williamson, and her husband, Perry, moved back to Hannibal from Alaska in order to be nearer to family. They bought the two houses in 2003, moved into the Market Street house, and started a Montessori preschool, which they operated for 13 years in the Willow Street house.

They continue to live at 2334 Market today, 102 years after Sue’s great-great-grandmother initially purchased the property.

Rosemary Bridges Bousman was well known in Hannibal. She went to Hannibal-LaGrange College, and after after her divorce from William Francis Bousman 1949, she worked briefly at the gift shop at the Depot; worked at Bluff City Dairy at the corner of Market and Gordon from 1942-47; Griffen’s Flowers from 1947-63; and from the Hannibal Free Public Library from 1963-1990.

Thanks to Sue Williamson, whose diligent family research made this story possible.

Mary Lou Montgomery, retired as editor of the Hannibal (Mo.) Courier-Post in 2014. She researches and writes narrative-style stories about the people who served as building blocks for this region’s foundation. Books available on Amazon.com by this author include but are not limited to: "The Notorious Madam Shaw," "Pioneers in Medicine from Northeast Missouri," "The Historic Murphy House, Hannibal, Mo., Circa 1870,” and “Hannibal’s ‘West End,’” 47 stories of the Market Street Wedge and on west to Lindell Avenue. Montgomery can be reached at Montgomery.editor@yahoo.com. Her collective works can be found at www.maryloumontgomery.com