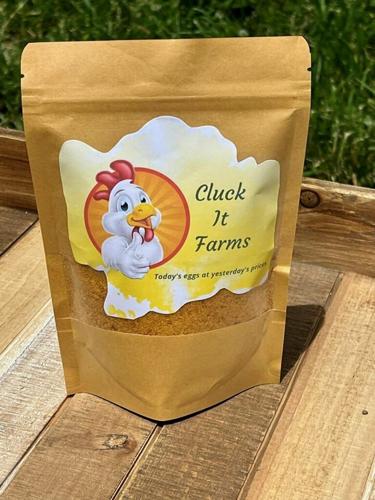 A sample bag of the dehydrated eggs offered by New London-based Cluck It Farms. A purchase of a two-pound bag will also provide a local family in need with a same size bag. 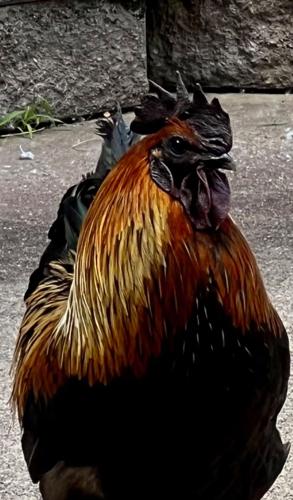 Richard the rooster, known for his antics at Cluck It Farms.

A sample bag of the dehydrated eggs offered by New London-based Cluck It Farms. A purchase of a two-pound bag will also provide a local family in need with a same size bag.

Richard the rooster, known for his antics at Cluck It Farms.

NEW LONDON, Mo. — Larry and Contessa Dryden have found a way to give people in their community a boost through their family-owned farm and a rooster named Richard.

Richard and three hens — Wicket, Ivory and Sweetie — rule the roost at Cluck It Farms near New London, where the Dryden family is raising a variety of free-range, antibiotic-free chickens.

Cluck It Farms is now offering dehydrated eggs to the community and with every two-pound bag purchased, another two-pound bag is given away to local families or persons in need. Larry Dryden said they want to give a sustainable food option that people can have for backup.

“We really just wanted to do something that would help the average person,” said Dryden. “Things are not going well with the food supply chain. I am watching it daily.”

The two pounds of dehydrated eggs are equal to almost 80 eggs, which comes in a powdered form. One egg is equal to two tablespoons of powdered egg mixed with water.

The dehydrated eggs are taken fresh from the farm when the product is ordered and are cracked and pureed in a large blender. They then spend 56 hours in an industrial sized dehydrator.

All egg shells they use are taken right back to their chickens to eat, or sold to others for feed, which provide calcium to help the chickens lay better eggs.

Dryden said they also take the European approach to their eggs by not cleaning them before they are sold. He said the eggs have a special coating that protects them from bacteria and washing that off will open them up to things like salmonella.

“If you look at photos from the early 1900s you will see they always have eggs on the counter that are not refrigerated,” he said. “They never had to, and that’s because they didn’t wash them.”

They also collect eggs fresh to every order, including the dehydrated eggs, in order to give them a longer shelf-life.

Their motto is “Today’s eggs at yesterday’s prices” and that’s what they live by.

If someone is unable to afford their products then Dryden said to call and talk to them. They are also taking names of local people in need in order to provide a free two-pound bag of dehydrated eggs for each bag purchased.

At a time when so many are relying on the government for help, Dryden hopes that neighbors can start relying on each other. He mentioned that he’s frustrated for those reaching out for help on social media who are often berated in the comment section.

“These people are already humbling themselves enough to go to a social medium to beg for help and it just gets rubbed in their faces,” he said. “We will not let anyone go hungry if we can help it.”

They are also offering a monthly subscription to receive 30 farm fresh eggs and half a pound of dehydrated eggs every month for $10.

They are willing to offer free delivery to those who are not able to pick up their order themselves. They can also ship orders, and due to dehydration time, will take about three days to ship out.

Those who do pick up the order might just meet the poultry gang including Richard the rooster, who Dryden says likes to chase the people around who tend to the lawn.

“I mean, our name is Cluck It Farms, we don’t take ourselves too seriously,” he said.