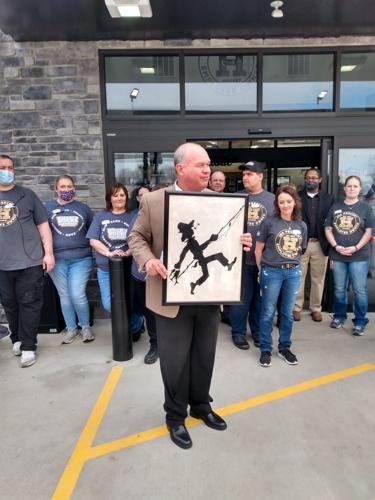 Mark Bayley, CEO of Huck’s, holds up a silhouette of Huckleberry Finn, which was the first representation of the store named after Huck’s and placed in every store, Wednesday, March 2, 2022, at the Hannibal store. He said building in Mark Twain’s hometown was a dream for their corporation. 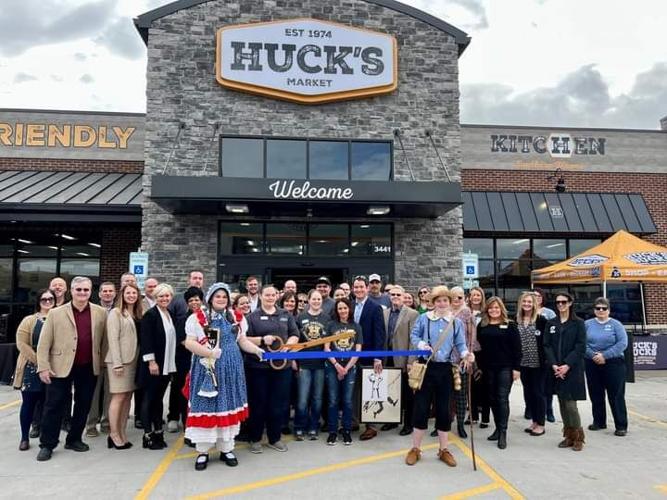 Mark Bayley, CEO of Huck’s, holds up a silhouette of Huckleberry Finn, which was the first representation of the store named after Huck’s and placed in every store, Wednesday, March 2, 2022, at the Hannibal store. He said building in Mark Twain’s hometown was a dream for their corporation.

HANNIBAL — A crowd gathered around the Huck’s Market on Wednesday morning for its grand opening and ribbon cutting ceremony.

Huck’s corporate leadership, members of the Hannibal Chamber of Commerce and Hannibal residents attended the event.

Bayley’s father and Martin’s grandfather first founded Huck’s convenience store in 1974 and in 2005, they sold the store to employees, making it an employee-owned corporation. Now, the store boasts 120 stores spread in five states and 1,500 employees.

“Just wanted to thank the community of Hannibal for allowing us to build this beautiful store and thank all the customers so far,” Martin said. “There has been great demand and we love seeing everybody.”

Bayley said building in Hannibal was a dream come true.

“This is a special store for us as we have always wanted to build in Hannibal,” he said. “Huck’s was based on Mark Twain in Hannibal, so this is where Huck’s was born.”

He held up a framed black and white silhouette of Huck Finn.

“This was our very first drawing of Huckleberry Finn,” he said. “We just kept putting them up in all of the stores.”

Darnell Harvey, district manager of Huck’s, said business has been steady since the store’s soft opening in February and he was pleased by the turnout at the grand opening.

He was especially happy with two special guests who came for the ribbon cutting.

“We didn’t expect Tom and Becky to be here, and we are giddy about that,” he said.

It was also a day to introduce Hannibal customers to their phone app, which will save 10 cents per gallon on gas and additional gas savings to the first-time user.

Lori Allen, loyalty manager, said for 30 days there will be codes on the app just for the Hannibal store. The more you shop, the more rewards you get.

“As you earn more points, you can save them up for gift cards or redeem them instantly for free items,” she said.

It’s also a time-saving app, allowing users to pay for gas purchases, and even scan items in the store and pay on the app.

“You can walk in and scan every item you want to buy and then pay on the phone. You can just skip the checkout all together,” she said.

To find out more about Huck’s app or about the corporation visit hucks.com.