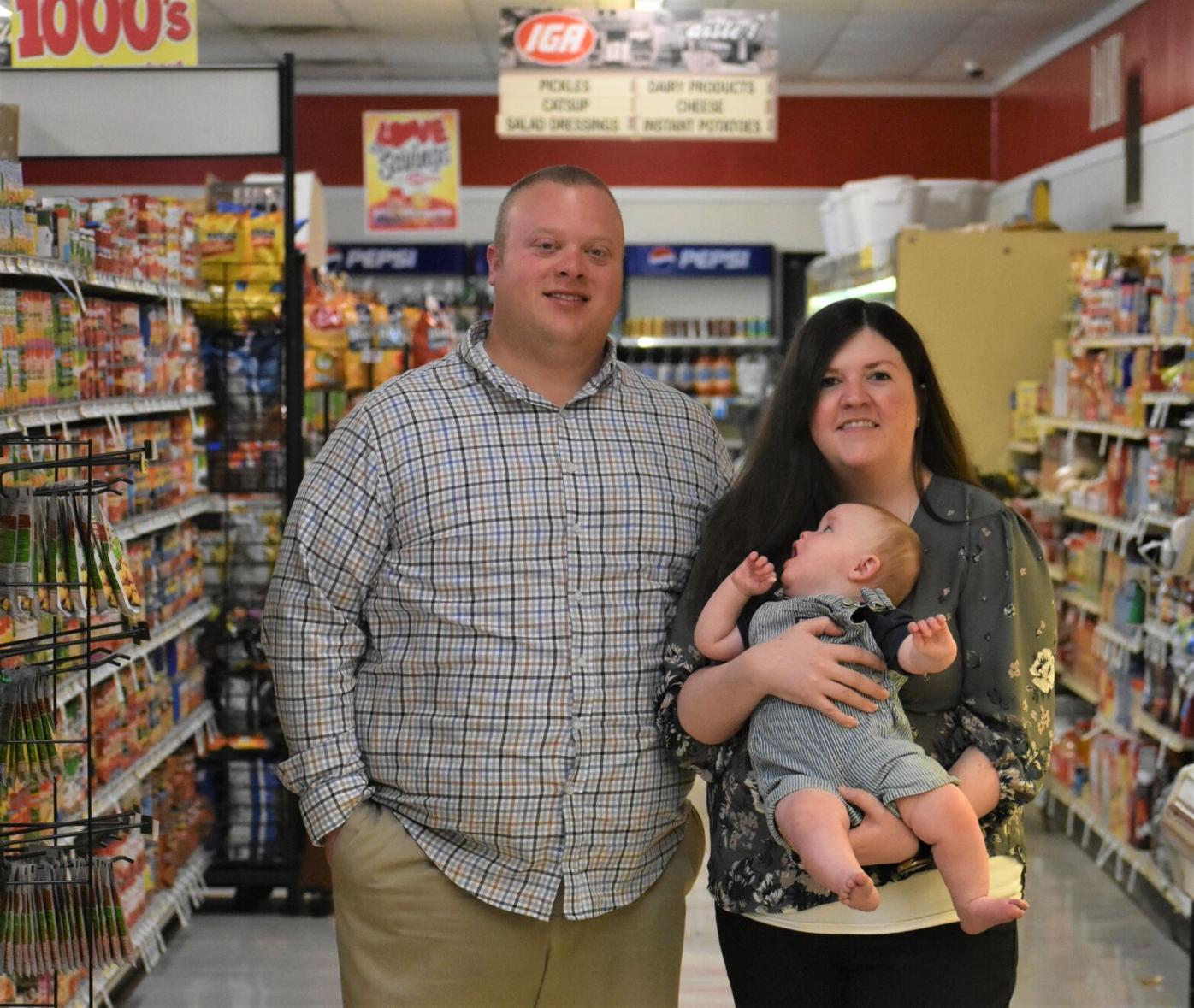 Jordan and Megan Branstetter are purchasing Hickman’s IGA. They will likely assume control by the end of June. Megan is holding their 8-month-old son, Brooks. 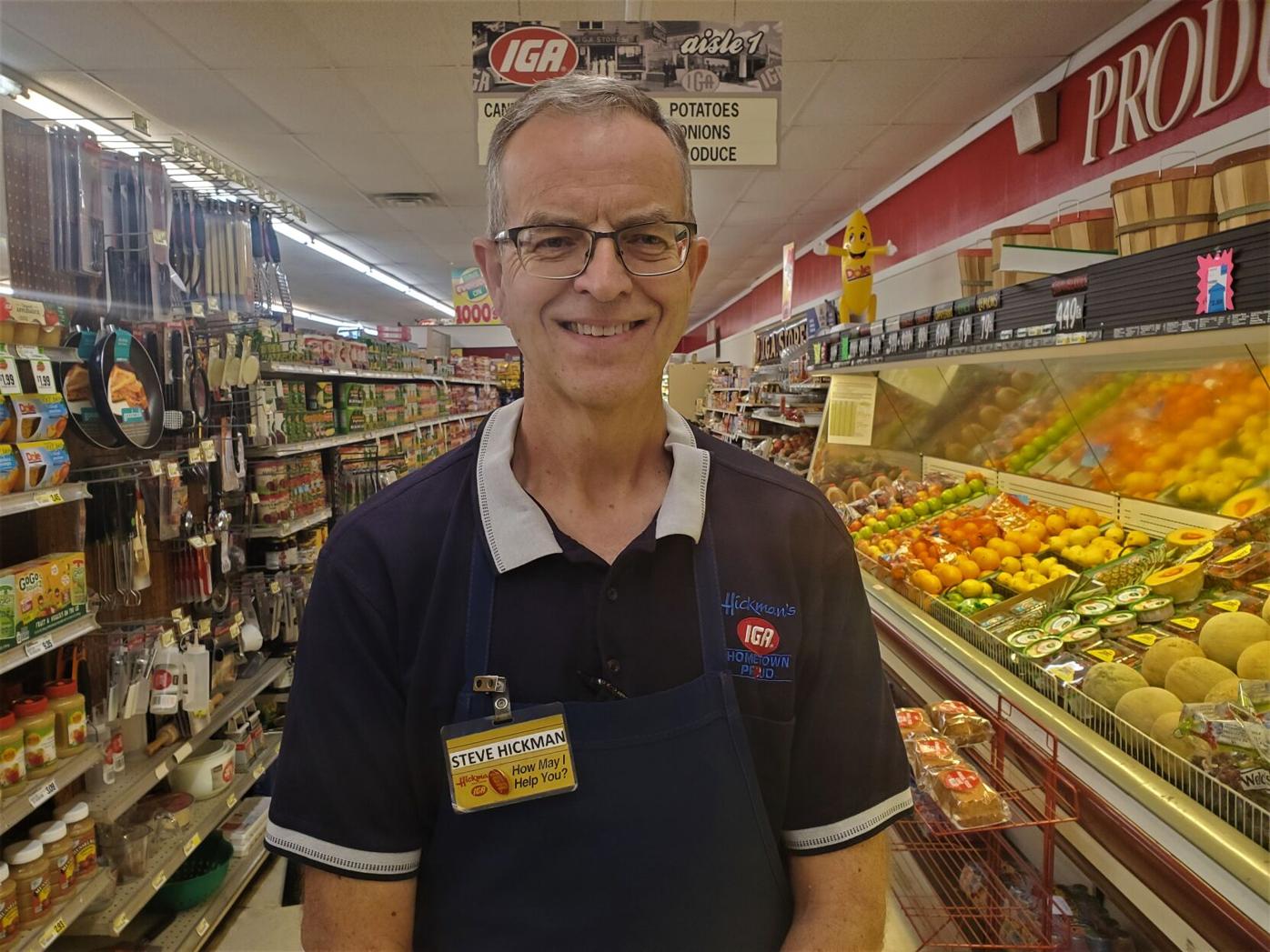 PERRY, Mo. — Though he is one generation removed, Jordan Bransetter is entering the family business.

The Van Far High School graduate and his wife, Megan Branstetter, have agreed to purchase Hickman’s IGA, which has been a fixture in Perry for 62 years. They begin learning the Hickman business this month with hopes of closing by June 28.

For Jordan, it is a return to family roots. His grandfather operated an independent grocery store in Vandalia, Hassein’s, when he was growing up, and he currently works for a wholesale food distributor located near Cape Girardeau, Mo.

“We are so excited about this opportunity,” Jordan said.

Steve Hickman, who still awakens each Thursday in what most folks would consider the middle-of-the night to unload a truck arriving at 4 a.m. to supply Hickman’s IGA in Perry, is delighted that a young family is taking over the store.

But the routine is a grind for Hickman, 64, who has worked in the family business since his grade school days.

Two years ago, the Hickmans – oldest brother Jim, 72, who owns the majority shares of the family-owned company, Kevin and Steve – sold their Paris IGA store to Prengers, a Macon-based family owned grocery.

Since then, they quietly marketed the Perry store. But in February, Steve Hickman posted a reminder on Facebook that the nearly 62-year-old business is for sale and a large for-sale sign was posted at the front entrance to the parking lot.

The long hours – 40 to 50 a week in the winter months and 60 to 70 during the active Mark Twain Lake visitor season – are taking a toll on both Kevin and Steve.

“I want to stop while there is still time to enjoy life,” Steve said in February.

And to illustrate his point, Hickman and his wife have booked a monthlong vacation on an island near Sarasota, Fla.

Bob Hickman, who was a butcher for the Kroger Co. in Jefferson City, heard through a supplier that the Perry IGA store was sale. Steve said his father liked the idea of owning the business, so in March 1959, the elder Hickman, with his wife, Jewel, left Kroger to rebrand the Perry IGA store as Hickman’s.

The grocery business has been good for the Hickman family, as over the years, Bob Hickman’s sons joined him in the store. And he expanded. Including the purchase of the IGA store in Paris, Hickman’s grew to eventually operate seven stores. Hickman brother Don worked in the Paris store until he retired in 2014. He passed away in December of 2016.

Competition from Walmart, Dollar General and others helped lead to a decision to downsize in 2013 when the brothers decided to refocus its business, said Kevin, and subsequently sold four of the seven stores to Niemann Foods, owner of County Market grocery stores, while a fifth store in Shelbina, was acquired as part of the right-away for a state road project.

“County Market offered to buy the Perry store, but they wanted to close the store,” Kevin said.

With the passing of Don, Jim’s retirement and no third-generation family members interested in running the business, the brothers decided to divest the Paris store and the Perry location.

“It was important for the community that this remain a grocery store,” Steve Hickman said.

The Branstetters said they are committed to carrying on the Hickman business, retaining the name in the store and continue an IGA affiliation. Moreover, for local residents who flock to the store at lunchtime, the deli will continue to operate.

“We have some ideas to expand the deli down the road,” Jordan said.

The couple are financing the purchase with the assistance of the HNB Bank facility in Perry. They had high praise for HNB Vice President Jeff Albus, who manages the Perry branch.

“Jeff understands the importance of keeping a local grocery store in Perry. We’ve been scrutinized closely, of course, but we are happy with be working with Jeff,” Megan said.

When they assume full control of the store, Jordan will work on running the grocery store while Megan, a banker, will handle the store’s finances.

They met in 2013 when Jordan’s company acquired a firm near Asheville, N.C. He spent several months in the area. Jordan met Megan, a graduate of Western Carolina University, on his first visit to the bank. He was immediately attracted to her though they did not start daring until 2015.

“I probably went to the bank everyday to make a deposit so I could see her,” he said.

The couple dated, got married and Megan relocated to Missouri with Jordan in 2017. They how have an 8-month-old son, Brooks

Jordan said they have sold their house in Southeast Missouri and this week, plan to move in with his parents in Vandalia while they look for a permanent home, with hopes of buying either in or closer to Perry.

“We can’t wait to get started,” Megan said. “We are just so excited.”