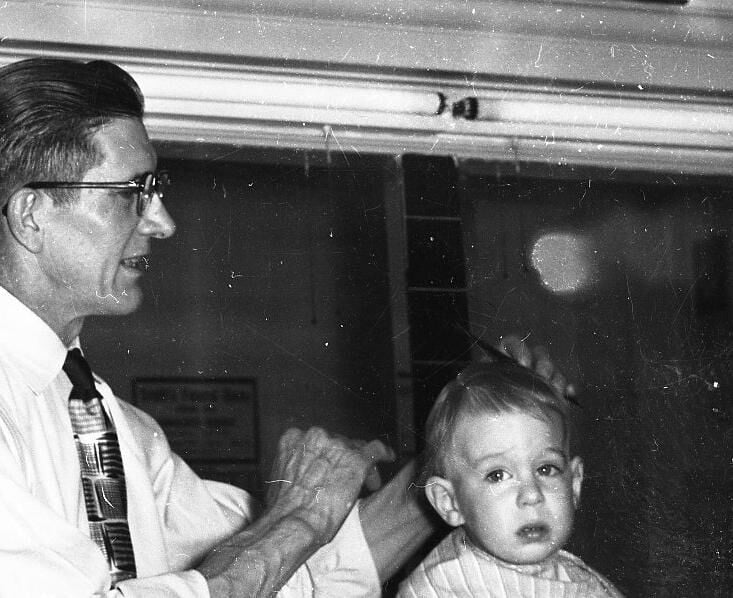 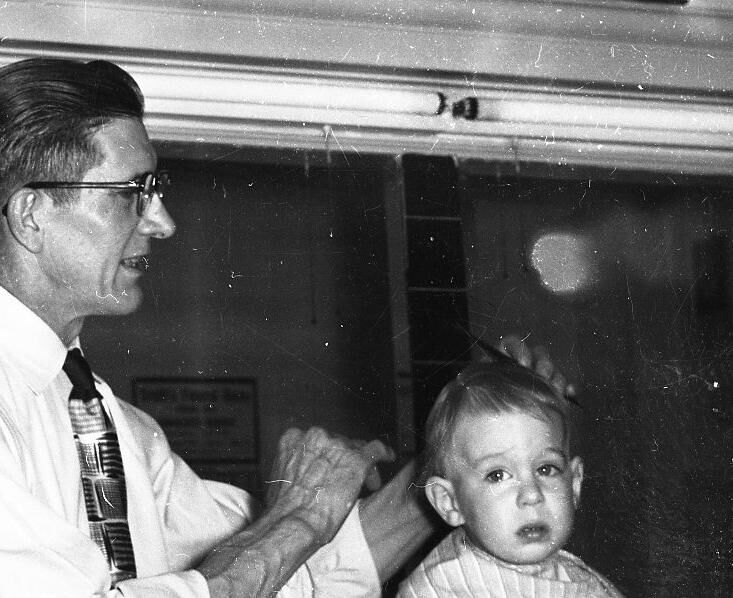 Nick Long has seen many barbers come and go throughout the years. He started his profession in Nov. 1, 1970, at Richmond, Mo., later worked in Hannibal, and continues working at a shop in New London, Mo.

Still proud of his profession, he has an astute memory of and respect for the men who worked as barbers prior to and during his lifetime.

“On Main Street in the 1950s, there were barber shops in between the taverns,” Nick said, as he pointed to the business buildings which once served Hannibal’s male clientele.

In 1983-84, Larry Daniels, Dennis Studer and Nick Long worked together at 308 Broadway. It was business and pleasure, Nick said. “Dennis Studer was the funniest comedian. He had us all laughing.” But Nick is emphatic: “No haircut was ever sacrificed for a lack of professional attention.”

“A lot of barbers came and went,” Nick said. “There were some great barbers, who gave lousy haircuts. The public doesn’t see the flaws, but another barber does. I always gave 150 percent to customers – even the ones I didn’t like.”

Nick was the son of Francis N. and Mary Long. He had a good and memorable childhood in Hannibal.

“My dad didn’t have much, but gave me lots of time. I’d be playing on Paris Avenue and he’d whistle. ‘I’m going fishing, want to go?’ I’d drop everything and go.”

Following are some of the barbers that Nick knew both in person and by reputation. In addition, some of Nick’s contemporaries shared their memories of the men who once cut hair in Hannibal.

This is not a comprehensive list. To share memories of more former Hannibal barbers, write to: Montgomery.editor@yahoo.com

George Bastian I, II, and III

Mr. and Mrs. George Bastian Jr. and son moved to Hannibal in Sept. 1954. He discontinued his barbering business in Palmyra and instead associated with his father in a similar enterprise in Hannibal.

George Bastian Jr., (1925-1998) was a licensed barber for the state of Missouri for 50 years. During his retirement he worked part-time at King’s Barber Shop and also went into homes of shut-ins to cut hair.

Pat Herrick Otto: I remember going with my dad (George Herrick) to the barber shop across from the pharmacy, which was located on the pie-shaped lot on St. Mary’s.

Jim Riding: Blakey cut hair at 9 Myer’s Row. He also had vendors (juke boxes) that played records in country towns around here. He also had one in Quincy, Ill. He worked out of a big concrete house on Meyer’s Row that is scheduled to be torn down. His mother had a store in that same building, and sold lunchmeat and other food. In 1937, James Blakey’s shop was located at 1210 Broadway.

Nick Long: Ryland Capps was manager of the Mark Twain Hotel barber shop in 1975, and lived at 1207 Paris Ave. He was Steve and Mike Resa’s granddad. Ryland’s brother-in-law was Nick’s grandfather’s best friend.

Nick Long: Leo worked on South Main. He was a small white-haired man. He could taper a neckline and make it look like Nature did it herself. He was an old gentleman when Nick knew him. In his final years he walked with a cane under his left arm.

Delores Noel: I think Cooper’s Barber Shop was close to Hudnell’s Second Hand Store on South Main. I remember a tavern across the street, Farris Tavern, maybe? My dad took my brothers to Coopers for haircuts in the late 50s.

Nick Long: Cecil worked on the south side of Broadway, in the 500 block, next door to the Gladys S. Catlett real estate office. Nils Tillquist worked with him. George Robertson apprenticed under Nils. After George quit (after 13 years) Gene Pierceall took over. Cecil had three chairs in his shop.

Nick Long: Larry (1945-2016) was an excellent cutter – a legend. At one time anyone who was anybody got his hair cut at Larry’s. Gene Hall gave all of his tools to Larry when he quit barbering. I wanted them; at least a pair of his Oster clippers.

Linda Whelan Geist: Eldred Dunston (1901-1964) was a barber on South Main Street, married to Beulah Boss. He left barber work to be a lineman on the railroad, and retired in Nevada. Eldred was brother-in-law to Fred Boss, Linda Geist’s grandfather.

Mary Lou Montgomery: Doug married Janet Broemmer of Hannibal, and moved to town while my husband, Eddie, was serving in the Air Force. When Eddie returned to town in 1968, he went to Doug at 3306 Market for a haircut. Doug continued as Eddie’s exclusive barber until Eddie’s death in January 2017.

Nick Long: In the 300 block of Broadway, next to the old Golden Ruler store, Friday Howard had a shop. He worked with Mark Hale. It was next door to Schafer’s Smoke House. The building is empty now. For awhile Nick rented that building. It was a nice shop and a great building, easy to heat.

Mark Oglesby: My dad took me to a barber named Friday on the north side of the 300 block of Broadway, next to Sam Lindquist’s art shop. I think there was a “smoke shop” near there, too.

Sharon Ball Huston: Ray Ball and Howard Hulett were neighbors on Ruby Street when Sharon was a child. Hulett’s shop was located at 1926 Market St., in 1937.

Nick Long: Paul Loy had a shop next to the Star Club on South Main. He gave me my first hair cut. When Paul closed up business, his shop became an extension to the Star Club.

Nick Long: Freddy took care of the poor and the unfortunates. In 1937 his barber shop was located at 114 Bird St.

Nick Long: Ralph (1910-1998) had a shop on the Bear Creek Bridge on South Main Street, right next to the train tracks. Three people in line waiting was an all-day job for him. He had to stop and wave at all the trains.

Gregg Andrews: Ralph Miller’s barber shop on South Main at the bridge: That place shook like crazy when the trains went by.

Terry Sampson: The Piercealls lived in the other side of a duplex from us when I was born, on the west side of Seventh halfway between Center and Bird. Mr. Pierceall cut my hair for years and then Gene did.

Nick Long: Raymond Page worked with Gene Pierceall in the 100 block of South Seventh Street, until Raymond quit barbering and went to work for the railroad.

Walter Johnessee: Ralph and Charlie Quinlin worked together as barbers. Charlie Quinlin was my neighbor and he cut my hair when I was young. He had a shop on South Main by Bear Creek. He was also on the board at Moler Barber School in St. Louis for years.

Nick Long: George started with Nels Tillquist right out of barber college. I went to him for a haircut in the 1960s, and he gave me candy. My first live music performance on state was with George Roberson.

Dana Riney: I liked George Roberson. He’d get your hair half cut and then play twenty minutes of guitar licks for you. All that between running out on the sidewalk and yelling at people at the stoplight. It took a little longer, but I loved it. I sure do miss my hair.

Nick Long: Lowell Thorpe had a shop on the South Side, on Union Street on a corner near the Stowell playground. Terry and Ferren Sims used to call him old huff and puff, because he breathed heavy.

Nick Long: Uncle Sonny lived at 2222 Pleasant Street for 50 years – he was my dad’s uncle. The Tillquist farm was to the west of his house, where Beth Haven Nursing Home is now. We’d go to his shop to get a hair cut, and he wouldn’t give me any candy. Once I asked him why. He said that he knew my dad was going to bring me back. He was saving the candy for others. (Sonny Tillquist died in 1967)

Archie Hayden shared a memory of the barber school in St. Louis where many of the local barbers trained, the Moler Barber School.

“My favorite barber story was about the Barber School down in St Louis where they trained barber wannabes. You could get a pretty good haircut from a barber who was at the end of his several months training for $3 or you could go up to the 4th floor and get a haircut from a second week student for 25 cents. One ear was about 4 inches lower than the other if it was still attached! This was next door to the hotel us railroaders stayed in on Washington Avenue, The Gateway.”

Mary Lou Montgomery is a writer, speaker and researcher with a specialty in history. She is the former editor of the Courier-Post.